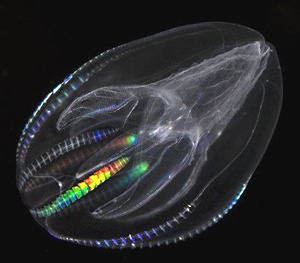 Bethesda, Md., Thurs., Dec. 12, 2013 - In a study that compares the genomes of aquatic life forms, researchers have found evidence to shuffle the branches of the tree of life. For more than a century, scientists thought that complex cell types, like neurons and muscles, evolved only once, after simple animals that lack these cell types branched from the rest of animals on the evolutionary tree. A team of researchers from the National Human Genome Research Institute (NHGRI), part of the National Institutes of Health, has provided new evidence from the genomic study of a ctenophore species - a comb jelly - that challenges this long-held view.

The cornerstone of the study, published in the Dec. 13, 2013, advance online issue of Science, is the researchers' sequencing, assembly, annotation and analysis of the genome of Mnemiopsis leidyi, a comb jelly native to the coastal waters of the western Atlantic Ocean. Whole-genome sequencing data shows that comb jellies branched from the rest of the animals before the sponge, a simple animal without complex cell types, according to the study. The results also show that critical cell types, such as neurons and muscle cells, were either lost multiple times during evolution or evolved independently in the ctenophores.

For the past 30 years, researchers have used whole-genome sequencing of organisms to advance their understanding of evolution. They do this by comparing the order of the chemical bases of DNA-150 million base pairs for comb jellies versus 3 billion in humans - that comprise the organism's genome. While whole-genome sequencing data have been available for four of the five major animal lineages - sponges (Porifera), flat invertebrates (Placozoa), jellyfish (Cnidaria), and animals with left-right symmetry, including humans (Bilateria) - Ctenophora remained the last major animal lineage for which there were no sequenced genomes.

"Having genomic data from the ctenophores is crucial from a comparative genomics perspective, since it allows us to determine what physical and structural features were present in animals early on," said Andy Baxevanis, Ph.D., senior author of the study and senior scientist in NHGRI's Division of Intramural Research. "These data also provide us an invaluable window for determining the order of events that led to the incredible diversity that we see in the animal kingdom."

Comb jellies possess muscle cells, but the analysis of the Mnemiopsis genome showed that comb jellies lack the vast majority of genes that specify muscle types in most other animals. According to the researchers, the absence of such a large number of muscle genes suggests that muscle cells evolved independently in comb jellies, after they diverged from the rest of the animals. Comb jellies also possess a simple form of nervous system, called a nerve net, and their genome contains many of the genes involved in the nervous system. Sponges also have these genes, suggesting that they may have had the capacity to support a nervous system and perhaps lost it.

The results of the study lead to a new way of thinking about early animal evolution. "Our analysis of the Mnemiopsis genome thoroughly corroborates previous studies suggesting that ctenophores might be the sister group to the rest of the animals," said Joseph Ryan, Ph.D., lead author and a former postdoctoral research fellow in NHGRI's Genome Technology Branch, now at the Sars International Center for Marine Molecular Biology, University of Bergen, Norway. "With our whole-genome sequencing data in hand, it is now clear that the cell types that make up muscles and nervous systems were either lost in some animal lineages or that, despite the complexity of these cells, they very well may have evolved multiple times."

"Expanding our understanding of genomes across the animal kingdom is important for gaining an understanding of evolutionary adaptation at the molecular, cellular and organismal levels," said Daniel Kastner, M.D., Ph.D., NHGRI scientific director. "The whole-genome sequence of the comb jelly provides a nontraditional model through which new insights about genes and their functions, including those in our own genome, may become better understood."

"Our study demonstrates the power of comparative genomics research having an evolutionary point of view, probing the interface of genomics and developmental biology," said co-author Jim Mullikin, Ph.D., NISC director. "The data generated in the course of this study also provide a strong foundation for future work that will undoubtedly lead to novel findings related to the nature of animal biology."

"Over the longer term, basic biological discoveries made in organisms such as Mnemiopsis could very well lay the groundwork for translational studies focused on specific human diseases," said Dr. Baxevanis.

The genomic data and associated annotations generated in the course of this study are available on the Mnemiopsis Genome Project Portal, at http://research.nhgri.nih.gov/mnemiopsis.

NHGRI is one of the 27 institutes and centers at the NIH, an agency of the Department of Health and Human Services. The NHGRI Division of Intramural Research develops and implements technology to understand, diagnose and treat genomic and genetic diseases. Additional information about NHGRI can be found at its Web site, at http://www.genome.gov.