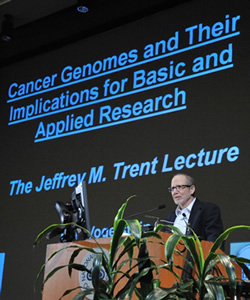 Researchers have published 852 studies describing the genomes of 23 different cancers over the past half century and a number of things have become clear. Though every cancer is different, tumors tend to have a very similar number of gene mutations, Bert Vogelstein, M.D., told a National Institutes of Health (NIH) audience of more than 500 attending the 10th annual Jeffrey M. Trent Lectureship in Cancer Research on Feb. 29, 2012. The lecture — held in the Natcher Conference Center on the NIH's main campus in Bethesda, Md. — is sponsored by the National Human Genome Research Institute's Division of Intramural Research.

"Mutations are just clocks," said Dr. Vogelstein, a cancer genetics pioneer at the Johns Hopkins University School of Medicine. "Every time a cell divides it mutates at a low rate and those changes are recorded in the cancer genome."

Dr. Vogelstein is the first researcher to explain the molecular basis of a common human cancer. His studies in this area comprise the most highly cited body of work not only in cancer research, but in all branches of science. His initial hallmark discovery was a tumor suppressor gene in colorectal cancer, and most other tumor types, called TP53.

Entitled "Cancer Genomes and Their Implications for Basic and Applied Research", the talk was divided into two themes. The first pertained to deciphering cancer genomes and the second explored ways to exploit them. Cancer genomes, like individual genomes, comprise the sequence and structure of a cell's DNA — but in a cancer cell or tumor. Researchers have generated vast amounts of data about cancer genomes in more than 125 whole genome studies and more than 725 whole exome studies to date. "This has really revealed the details of what the cancer genomes look like and has greatly illuminated the genetic basis as well as the physiologic basis of cancers," Dr. Vogelstein said.

How many mutations occur in the typical cancer cell? "The answer to that question is now clear," Vogelstein said. Most cancer tumors have between 20 and 80 mutations. The range cited by Dr. Vogelstein includes mutations in the coding region of tumor genomes that affect the coding for amino acids. Exceptions to this low-mutation-count rule include tumors that have a DNA repair defect, which would result in a rapid accumulation of mutations per tumor.

From that remarkably straightforward enumeration, Dr. Vogelstein drew his audience into the intricate world of mutation analysis. He explained that cancer tumors result from the combined effect of gene mutations over long periods.

Scientists now know that the mutation rate in cancer genomes — at the DNA base-pair level — is only marginally higher than for normal cells. But cancers can have other kinds of alterations in their genome that cause structural changes in tumors, particularly deletions of tumor suppressor genes, amplifications of cancer-promoting oncogenes and translocations of either of the two types of those genes. Additionally, environmental exposures to carcinogens can cause higher mutation levels, as in the lung cancer of smokers and the skin cancer melanoma from excessive sun exposure.

The number of driver mutations per cancer cell — those that produce rapid cell division — is another surprisingly concrete number: researchers have identified 117 so far, 70 that are tumor suppressors and 47 that are oncogenes. A driver mutation increases the ratio of cell birth to cell death. "There will be more, but the number is probably not going to be a lot more," Dr. Vogelstein said. All of these genes fit into 12 core signaling pathways.

The fact that researchers are finding relatively few new major cancer genes bodes well for cancer research. "This is what you would hope for," Dr. Vogelstein said. "It means that basic researchers over the past four decades have essentially discovered all of the pathways and most of the genes that are responsible for causing cancers. There's much work to be done, obviously, but I view this as a very positive finding."

The work challenging current researchers is to conduct genomics and epigenetic studies that further characterize cancer. Epigenetics considers the inherited changes in the genome caused by factors other than DNA sequence changes. Heightening the challenge is the fact that two cancer tumors are not the same. Dr. Vogelstein said that this heterogeneity of cancer tumors lends added importance to the area of personalized medicine.

The second half of Dr. Vogelstein's talk focused on exploiting cancer genomes for human health. He outlined three aspects of realizing the benefit of this science — patient management, therapeutics and cancer prevention.

Genomics researchers have shown that, together with pathology, genomic sequencing provides a potent tool for identification of cancer tumors. "The study of genetic alterations in tumors will eventually be able to add quite a bit to standard, conventional histopathological analysis," Dr. Vogelstein said. He provided examples of post-surgical use of genomic technology, such as detection of cancer following the removal of a tumor, or the assessment of a patient's response to therapeutic drugs.

For people who have cancer, the most important cancer genomics outcomes are therapeutic advances. Dr. Vogelstein said that targeted therapeutic agents, such as Gleevec — used in treatment of chronic myeloid leukemia — present great promise. He also acknowledged the importance of the use of additional therapies in combination with targeted therapies.

Another difficult problem in cancer treatment is the disparity in survival rates among the different tumor forms. Melanoma, if caught early, has a cure rate of 87 percent, but pancreatic cancer has just a 4 percent survivability rate. Dr. Vogelstein demonstrated that both forms of cancer are about as genetically complex and each has a long timeline for development. However, doctors commonly do not detect pancreatic cancer and other solid tumors, including colon cancer, until they are advanced. In fact, colon cancer takes 30 years to run its course, but is metastatic for just the final three years. Metastatic cancer acquires the ability to invade other tissue. "It's only in the last three years that metastasis has been realized," he said. Doctors would like to catch cancer before it metastasizes.

Dr. Vogelstein concluded his talk with an early detection plan involving cancer genomics. The heart of the plan is an annual medical office visit and collection of blood and other tissue samples. A doctor would order standard cancer biomarker analysis along with DNA sequence screening for genetic alterations of the samples. Sophisticated imaging also is part of the detection plan. "The trick will be to design these tests in a cost-effective, high-throughput manner," Dr. Vogelstein said.

Challenges that Dr. Vogelstein outlined for future research included gains in understanding the molecular pathways in the cancer genome and studies in human cells or humanized systems. Adding to these are development of new biologic therapies to exploit cancer genetics and focus on early detection and new prevention strategies based on sophisticated molecular genomic technologies and imaging for detection and prevention.

Dr. Vogelstein is the Clayton Professor of Oncology and Pathology and Director of the Ludwig Center for Cancer Genetics & Therapeutics at the Sidney Kimmel Comprehensive Cancer Center of the Johns Hopkins University School of Medicine. His work on colorectal cancers is an underpinning for much of modern cancer research, with profound implications for diagnostic and therapeutic strategies in the future. He also is a Howard Hughes Medical Institute Investigator.