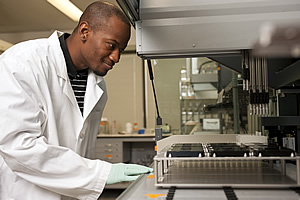 At the Baltimore Food Co-Op in Maryland, members purchase plump tomatoes, bricks of tofu and organic milk. Co-op members count on fresh, healthy and reasonably priced food. Six miles southeast of the store is a different kind of co-op called the National Institutes of Health (NIH) Center for Inherited Disease Research Program (CIDR, pronounced like cider). Instead of bulk granola, investigators receive high-quality genotypes by the billions and DNA sequences by the gigabase. All of this data is wrapped in services designed to help them identify genes that contribute to human health and disease (www.cidr.jhmi.edu).

"We take it for granted that scientists in different institutes would work cooperatively now but, in 1996, it was a pretty quirky idea," said Lawrence Brody, Ph.D., the CIDR program's government scientific officer, and chief and senior investigator of NHGRI's Genome Technology Branch.

Housed in a 18,000 square-foot facility at Johns Hopkins Bayview Medical Center in Baltimore, CIDR offers researchers high-quality services that can't be handled by individual small research labs. CIDR produces DNA-based data that allow researchers to understand why certain individuals are prone to specific disease. The location of these "disease genes" can be pinpointed by scanning through these data. Genotyping involves examining a person's DNA at a site where a variation is commonly known to occur.

Along with its genotyping services, CIDR provides substantial support from on-site geneticists and bioinformaticians. They offer researchers guidance on study designs, data production and quality control. CIDR staff constantly survey the field of genomics to stay current with cutting-edge technology.

"Before bringing on new technology, we test how feasible it would be in a high-throughput environment," said Kimberly Doheny, Ph.D., CIDR's lead co-principal investigator. "They must be robust because we produce 100 million genotypes a day. We're on technology's cutting edge, which helps us maintain our position as the top genotyping center in the U.S."

The price for CIDR services? They are free to extramural researchers supported by any of the 14 participating NIH institutes or centers. Genotyping and next-generation sequencing services are also available to external investigators on a fee-for-service basis.

Six times a year, the CIDR Access Committee reviews the streamlined applications from researchers wanting access to free CIDR services. Once this committee assigns priority scores to applications, the CIDR Board of Governors decides which projects are accepted for free genotyping. This NIH board is comprised of the directors or designees of the supporting institutes.

"We've never taken all comers," said David Valle, M.D., CIDR co-principal investigator and director of the Johns Hopkins Institute of Genetic Medicine. "We are focused on high quality science. We have an excellent study section to review applications, analyze advances in technology and figure out how to do things better."

In its 15 years, CIDR services have been used by researchers on 540 projects based on 630,000 samples exploring 175 disease phenotypes. More than 400 peer-reviewed papers published in 100 journals are based on data generated at CIDR. Among them were studies by Michael Boehnke, Ph.D, director of the Center for Statistical Genetics at the University of Michigan School of Public Health, and colleagues, who discovered four gene variants common in patients with Type 2 diabetes; and by Christopher Amos, Ph.D., professor of epidemiology and bioinformatics at the University of Texas M.D. Anderson Cancer Center and Joan Bailey-Wilson, Ph.D., co-branch chief of NHGRI's Inherited Disease Research Branch, who identified several regions in the human genome that appear to contribute to lung cancer risk.

Next year, Dr. Bailey-Wilson, Terri Beaty, Ph.D., from Johns Hopkins Bloomberg School of Public Health and their colleagues will publish findings from a new sequencing dataset produced at CIDR. Through CIDR, Dr. Bailey-Wilson is sequencing the whole exomes of Syrian families with high rates of inherited cleft lip and/or palate. Exome sequencing is a strategy to selectively sequence exons, the short, functionally important sequences of DNA. Exons represent the regions in genes that are translated into proteins (the large, complex molecules that do most of the work in cells) and the regions flanking them. Dr. Bailey-Wilson and her husband, Alexander Wilson, Ph.D., who co-lead NHGRI's Inherited Disease Research Branch, were among CIDR's first collaborators and have conducted their research from the CIDR facility since it opened.

"From a researcher's perspective, the major advantage of CIDR is high-quality data at a reasonable cost," said Dr. Bailey-Wilson. "You can spend thousands of dollars enrolling people, gathering data on their traits and taking measurements — but if you don't get good genetic data, it doesn't matter how good your study is. Quality is number one."

Fifteen years ago, scientists used microsatellite markers, also known as short tandem repeats, and gel-based technology, to find the genes that increase a person's disease risk. These markers are repeating sequences of 2-6 base pairs of DNA that differ among individuals, groups or populations. Using this technique, researchers quickly began finding genes linked to breast cancer, cystic fibrosis and various rare Mendelian diseases caused by the malfunction of a single gene.

"Because of these early successes, NIH began seeing a flood of grant applications in which scientists wanted to do a lot of linkage studies using the microsatellite technique," said Dr. Brody. "However, running the microsatellite technique requires being familiar with the vagaries of the method. These markers were difficult to score and required a fair bit of technical expertise — and each machine cost $100,000."

That's when Francis S. Collins, M.D., Ph.D., NIH director, who was then the director of the National Center for Human Genome Research (that became NHGRI), and Robert Nussbaum, M.D., former chief of NHGRI's Genetic Disease Research Branch, proposed that NIH centralize the processing of linkage studies using microsatellite markers. This would allow individual investigators to skip becoming genotyping experts and concentrate their efforts on understanding their particular disease of interest.

"Eight institutes agreed to chip in and pool resources to fund CIDR," Dr. Brody said. "The group also agreed to support a research and development component where we would test technologies and figure out how they work the best and get them to the production phase. Once they're all ready to go, we open up the services to investigators." Over the years the driving force behind the investigation of new technologies has been co-principal investigator, Alan F. Scott, Ph.D., who is also director of the Johns Hopkins Medicine Genetic Resources Core Facility (www.grcf.jhmi.edu ).

At the time that CIDR was being created, Johns Hopkins Medicine had recently opened the Triad Technology Center at Baltimore's Bayview Medical Campus and was looking for tenants. Located on the highest point in the city, Bayview's previous incarnations had included a tuberculosis sanatorium where the afflicted could enjoy fresh breezes and rest, the only treatment at the time; and a residence for people with mental illness. Later, it became the Baltimore City Hospital, known by the initials BCH — so people said they were going to the "beach" when they visited the hospital.

NIH leaders decided that the Bayview Medical Campus was a viable location and Johns Hopkins a suitable partner. "In retrospect, the project was a no-brainer," Dr. Valle said. "John Hopkins had a long history in genetics research but it hadn't been a major player in the Human Genome Project, which started in 1990. CIDR was a worthwhile way to get into the next phase of genomic research."

To do association studies, the field moved to using single-nucleotide polymorphisms (SNPs, pronounced snips) that could be examined using array technology. SNPs are the most common type of genetic variation among people, with each SNP representing a difference in a single DNA building block, called a nucleotide. SNP arrays allow researchers to look at 500,000 to 5 million SNPs at a time instead of the 400 markers they looked at in earlier linkage studies. Once the data sets are generated, scientists can compare the frequency of specific SNPs in those affected with disease to those that are disease free. Forty-one GWAS data sets generated at CIDR have been deposited in the Database of Genotypes and Phenotypes (dbGaP) as required by NIH Data Sharing Policy; all non-GWAS datasets remain the property of the principal investigator.

"Instead of studying five or six families with affected individuals with a rare disease, I could now study 1000 people with diabetes and 1000 people who didn't have diabetes," Dr. Brody said. "I could look at the entire genome and compare the frequency of everything in one group to everything in another group. That's when the successes in complex diseases started to pile up." CIDR-enabled SNP studies have identified genes that are connected to Parkinson's disease, smoking cessation and addiction, dementia, near-sightedness and many other diseases and conditions. These findings allow researchers to understand the mechanism of the diseases and identify who might be at risk.

CIDR now is entering the third phase of its life as it transitions to the use of whole-genome sequencing, which looks at the entire DNA sequence of a person's genetic material, or genome, from a DNA sample. It is also doing whole-exome sequencing, which looks at the 1 percent of the genome that is translated into proteins and the regions flanking them.

"This is great news because it means that people in universities without large sequencing centers can now have easy access to the same high-quality sequencing data," said Dr. Bailey-Wilson.

Whole-genome and whole-exome sequencing are not yet cheap enough to use in association studies, which involve thousands of individuals. However, rare diseases involving smaller numbers of people that haven't been solved by the linkage method are now being fed into this sequencing pipeline. This aspect of CIDR's work was advanced recently when it was named one of the Centers for Mendelian Genomics, a new NHGRI initiative to accelerate the discovery of genes underlying Mendelian (rare) disorders. As part of the Baylor-Hopkins Center for Mendelian Genomics, CIDR is actively generating whole-exome sequencing datasets and supporting downstream analyses.

As it moves forward, CIDR's overarching goal is advancing the use of genomic information in the delivery of health care. "We've generated data sets where the results can be put in the medical record or returned to patients," Dr. Doheny said. "For example, CIDR provided genotyping data to return to patients in the Multiplex Initiative with Dr. Brody and colleagues." The Multiplex Initiative explores the outcomes of offering people information about their genetic susceptibility to common health conditions.

CIDR is part of Hopkins' McKusick-Nathans Institute of Genetic Medicine and uses this relationship to interact with a variety of activities at the School of Medicine. "We're also starting to work with diagnostic labs at Johns Hopkins Medical School on supporting their transition to next-generation sequencing for inherited disorders and molecular pathology testing," Dr. Doheny said. "But first we have to have lab standards in place."

CIDR is aiming to attain certification in standards set by the Clinical Laboratory Improvement Amendments (CLIA) and the College of American Pathologists (CAP). These two bodies certify that labs are capable of producing data that can be used in patient care; CAP standards are considered to be more stringent. On July 31, CAP published a checklist specific to next-generation sequencing for clinical lab accreditation. The checklist, available online to CAP-accredited labs, includes 18 requirements that are effective immediately. CLIA and CAP certification for next-generation sequencing will also allow CIDR to support future translational research studies.

"We're constantly looking forward," Dr. Valle said. "We've done this very well. Overall, keeping our eyes on the next breakthrough technology has allowed us to stay at the cutting edge. It has allowed us to deliver the highest quality data at the lowest possible price. The whole area of genetics is progressing so rapidly. It's really exciting."