Gene Therapy and the Biological Treatment of Hearing Loss

Gene Therapy and the Biological Treatment of Hearing Loss 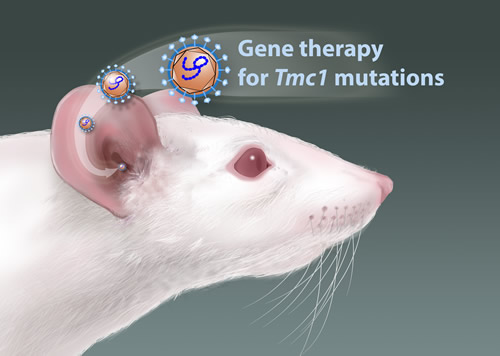 Ludwig von Beethoven suffered from deafness in his mid-twenties. To combat that hearing loss, the composer turned to the advanced technology of 1813 and commissioned his mechanically minded contemporaries to make ear trumpets to funnel and magnify sound.

While ear trumpets were ultimately ineffective, 200 years of progress have provided a much more promising biological alternative. July's Genome Advance of the Month highlights a study in the journal Science Translational Medicine that demonstrated gene therapy as an effective way to improve hearing in patients with two genes linked to genetic prelingual deafness, or hearing loss that occurs before a child learns to speak. The study focused on deafness caused by defects in transmembrane channel-like 1 (TMC1), which is a gene that codes for a protein that helps convert sounds into electrical signals for the brain to interpret. Defects in the TMC1 gene are a common cause of genetic deafness, accounting for 4 to 8 percent of cases.

The study's authors, Charles Askew, Ph.D., Jeffery R. Holt, Ph.D. and colleagues at École Polytechnique Fédérale de Lausanne in Switzerland, examined the use of gene therapy to cure hereditary deafness in mice with two types of Tmc1 mutations. The first type had the Tmc1 gene deleted, which is a good model for children who have two TMC1 mutations and experience hearing loss at a very young age. The second type was a specific malfunctioning variant of TMC1 fittingly known as Beethoven in honor of the 19th century composer. Mice with the Beethoven point mutation closely model the loss of hearing in humans who have an autosomal dominant TMC1 mutation that leads to progressive hearing loss in the teen years.

In a 2013 publication, Dr. Holt's research group showed that TMC1, and the related protein Tmc2, are necessary components for the function of hair cells (Pan et al., 2013). Hair cells transform the movement of air in the ear canal into electrical impulses that the brain analyzes for auditory and spatial information. Hair cells cannot regenerate upon death; as such, hearing loss due to their cell death is cumulative. While cochlear implants may be used to artificially stimulate the auditory nerve that transmits sound signals from the ear to the brain, there is presently no biological technology to treat or reverse hearing loss caused by malfunctioning TMC1.

Gene therapy, however, may answer that technologic need. Adeno-associated viruses (AAV) have long been a promising vector for human gene therapy due to their apparent inability to cause disease or integrate their viral genome into the human host genome. This molecular tool can be loaded with a gene of interest and deliver the gene to cells without negative effects on the recipient. Previous studies in deafness have used the AAV system to restore the ability of Tmc1-defficient cells to transform sounds to electrical impulses in hair cells harvested from a mouse ear (in vitro). Emboldened by these successes, Dr. Askew's team designed an AAV vector, called AAV2/1-Cba-Tmc1, that carried non-mutant Tmc1 and Tmc2 genes with a promoter, Cba, and injected it into the ear cells of a living mouse (in vivo).

The hearing abilities of mice treated with this gene therapy were tested by analyzing the brain function and startle response to unexpected auditory stimuli (sounds). The study's findings show that Tmc1 and Tmc2 provide proteins that serve the same function, meaning that injection of either gene will restore the ear's ability to transform sounds into electrical impulses and partially restore hearing. Interestingly, mice with the Beethoven point mutation did not show late onset deafness when treated with AAV2/1-Cba-Tmc1, suggesting a possible mechanism for hearing preservation.

In his later years, Maestro Beethoven would hammer out arpeggios of the deepest notes on a piano set directly onto the floor so that he could feel the rumbling bass in his bones. While gene therapy with AAV2/1-Cba-Tmc1 would likely not have helped Beethoven, since scholars can be nearly certain that he was not a carrier of a mutant TMC1 gene, this promising genomic discovery may eventually enable those who do have deafness caused by a TMC1 mutation to regain their ability to hear.