Genetic mapping offers evidence that a disease transmitted from parent to child is linked to one or more genes and provides clues about which chromosome contains the gene and precisely where the gene lies on that chromosome.

What is genetic mapping?

Among the main goals of the Human Genome Project (HGP) was to develop new, better and cheaper tools to identify new genes and to understand their function.

One of these tools is genetic mapping. Genetic mapping - also called linkage mapping - can offer firm evidence that a disease transmitted from parent to child is linked to one or more genes. Mapping also provides clues about which chromosome contains the gene and precisely where the gene lies on that chromosome.

Genetic maps have been used successfully to find the gene responsible for relatively rare, single-gene inherited disorders such as cystic fibrosis and Duchenne muscular dystrophy. Genetic maps are also useful in guiding scientists to the many genes that are believed to play a role in the development of more common disorders such as asthma, heart disease, diabetes, cancer, and psychiatric conditions. 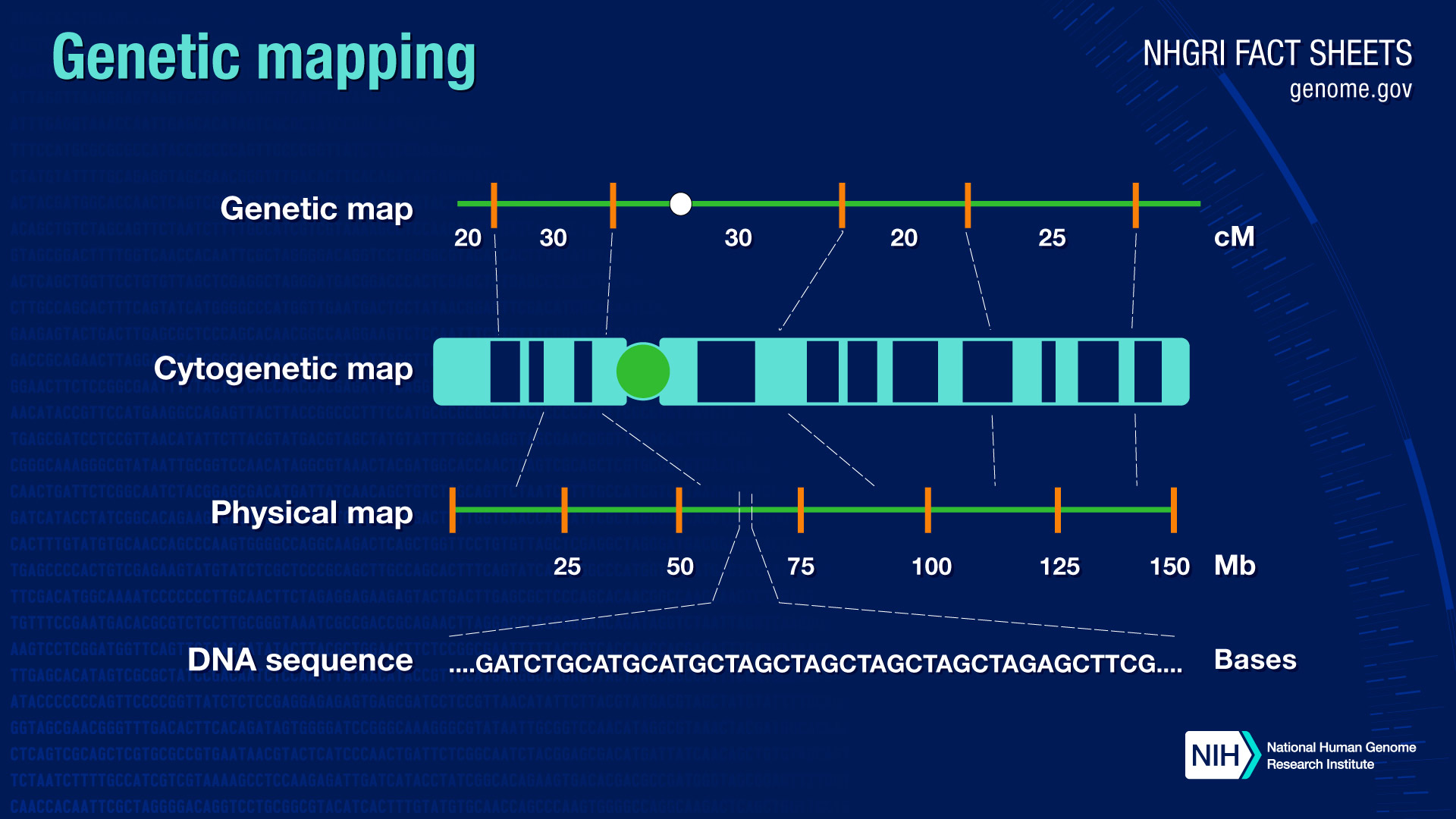 How do researchers create a genetic map?

To produce a genetic map, researchers collect blood or tissue samples from members of families in which a certain disease or trait is prevalent. Using various laboratory techniques, the scientists isolate DNA from these samples and examine it for unique patterns that are seen only in family members who have the disease or trait. These characteristic patterns in the chemical bases that make up DNA are referred to as markers.

DNA markers don't, by themselves, identify the gene responsible for the disease or trait; but they can tell researchers roughly where the gene is on the chromosome.

This is why: when eggs or sperm develop, the paired chromosomes that make up a person's genome exchange stretches of DNA. Think of it as a shuffling process, called recombination. The single chromosome in a reproductive cell contains some stretches of DNA inherited from the person's mother and some from his or her father.

If a particular gene is close to a DNA marker, the gene and marker will likely stay together during the recombination process, and they will likely be passed on together from parent to child. If each family member with a particular disease or trait also inherits a particular DNA marker, it is very likely that the gene responsible for the disease lies near that marker.

The more DNA markers there are on a genetic map, the more likely it is that at least one marker will be located close to a disease gene-and the easier it will be for researchers to zero in on that gene. One of the first major achievements of the HGP was to develop dense maps of markers spaced evenly across the entire human genome.

What are genetic markers?

Markers themselves usually consist of DNA that does not contain a gene. But because markers can help a researcher locate a disease-causing gene, they are extremely valuable for tracking inheritance of traits through generations of a family.

The development of easy-to-use genetic maps, coupled with the HGP's successful sequencing of the entire human genome, has greatly advanced genetics research. The improved quality of genetic data has reduced the time required to identify a gene from a period of years to, in many cases, a matter of months or even weeks.

Genetic mapping data generated by the HGP's laboratories is freely accessible to scientists through databases maintained by the National Institutes of Health and the National Library of Medicine's National Center for Biotechnology Information (NCBI) [ncbi.nlm.nih.gov], as well as the Genome Browser of University of California, Santa Cruz.