A knockout mouse is a laboratory mouse in which researchers have inactivated, or "knocked out," an existing gene by replacing it or disrupting it with an artificial piece of DNA.

What are knockout mice used for?

Knocking out the activity of a gene provides valuable clues about what that gene normally does. Humans share many genes with mice. Consequently, observing the characteristics of knockout mice gives researchers information that can be used to better understand how a similar gene may cause or contribute to disease in humans.

Examples of research in which knockout mice have been useful include studying and modeling different kinds of cancer, obesity, heart disease, diabetes, arthritis, substance abuse, anxiety, aging and Parkinson disease. Knockout mice also offer a biological context in which drugs and other therapies can be developed and tested.

Many of these mouse models are named after the gene that has been inactivated. For example, the p53 knockout mouse is named after the p53 gene, which codes for a protein that normally suppresses the growth of tumors by arresting cell division. Humans born with mutations that inactivate the p53 gene suffer from Li-Fraumeni syndrome, a condition that dramatically increases the risk of developing bone cancers, breast cancer and blood cancers at an early age.Other mouse models are named, often with creative flair, according to their physical characteristics or behaviors. For example, "Methuselah" is a knockout mouse model noted for longevity, while "Frantic" is a model useful for studying anxiety disorders.

What are the drawbacks of knockout mice?

While knockout mice technology represents a valuable research tool, some important limitations exist. About 15 percent of gene knockouts are developmentally lethal, which means that the genetically altered embryos cannot grow into adult mice. The lack of adult mice limits studies to embryonic development and often makes it more difficult to determine a gene's function in relation to human health. In some instances, the gene may serve a different function in adults than in developing embryos.

Knocking out a gene also may fail to produce an observable change in a mouse or may even produce different characteristics from those observed in humans in which the same gene is inactivated. For example, mutations in the p53 gene are associated with more than half of human cancers and often lead to tumors in a particular set of tissues. However, when the p53 gene is knocked out in mice, the animals develop tumors in a different array of tissues.Despite these drawbacks, knockout mice offer one of the most powerful means now available for studying gene function in a living animal. Such studies will accelerate efforts to translate newfound knowledge of the human and mouse genomes into better strategies for diagnosing, treating and preventing human disease. 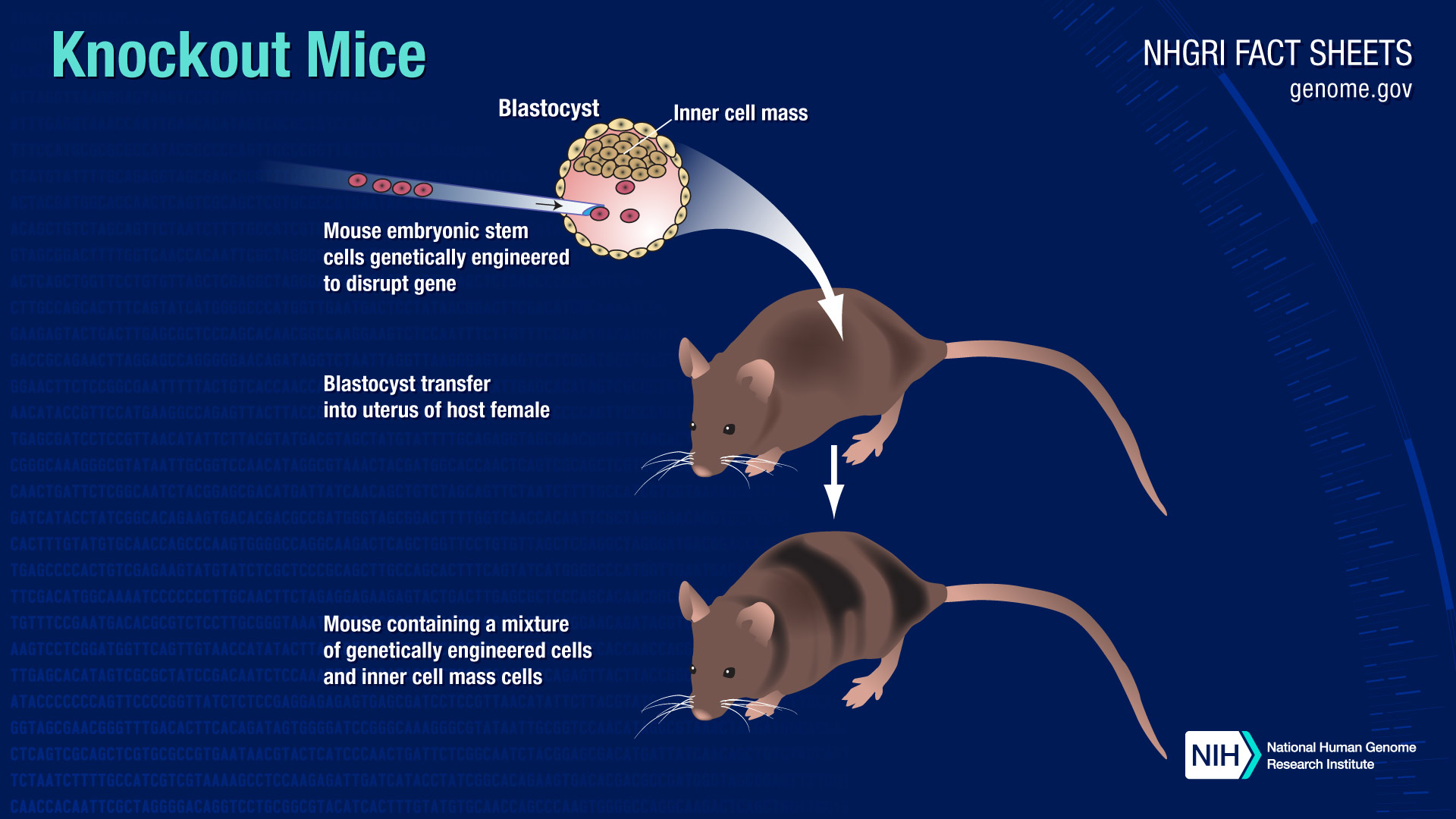 How are knockout mice made?

Researchers begin by harvesting embryonic stem (ES) cells from early-stage mouse embryos four days after fertilization. ES cells are used because they are able to differentiate into nearly any type of adult cell, which means that if a gene is knocked out in an ES cell, the effects can be observed in any tissue in an adult mouse. In addition, ES cells grown in the lab can be used to make knockout mice as long as 10 years after they were harvested.

To produce knockout mice, researchers use one of two methods to insert artificial DNA into the chromosomes contained in the nuclei of ES cells. Both methods are carried out in vitro, that is in cultured cells grown in laboratory conditions.

In the first strategy, called gene targeting or homologous recombination researchers specifically manipulate a gene in the nucleus of an ES cell. Typically, this is done by introducing an artificial piece of DNA that shares identical, or homologous, sequence to the gene. This homologous sequence flanks the existing gene's DNA sequence both upstream and downstream of the gene's location on the chromosome. The cell's own nuclear machinery automatically recognizes the identical stretches of sequence and swaps out the existing gene or portion of a gene with the artificial piece of DNA. Because the artificial DNA is inactive, bearing only a genetic tag, or "reporter gene," designed for use in tracking, the swap eliminates, or "knocks out," the function of the existing gene.

In the second strategy, called gene trapping, researchers again manipulate a gene in an ES cell. However, instead of directly targeting a gene of interest, a random process is used. A piece of artificial DNA containing a reporter gene is designed to insert randomly into any gene. The inserted piece of artificial DNA prevents the cell's RNA "splicing" machinery from working properly, thus preventing the existing gene from producing its designated protein and knocking out its function. As in the first strategy, researchers can track the activity of the artificial reporter gene to figure out the existing gene's normal pattern of activity in mouse tissues.

For both gene targeting and gene trapping, the vehicle used to ferry the artificial DNA into ES cells often consists of a modified viral vector or a linear fragment of bacterial DNA. After the artificial DNA is inserted, the genetically altered ES cells are grown in a lab dish for several days and injected into early-stage mouse embryos. The embryos are implanted into the uterus of a female mouse and allowed to develop into mouse pups.

The resulting mouse pups have some tissues in which a gene has been knocked out - those derived from the altered ES cells. However, they also have some normal tissues derived from the non-altered embryos into which the altered ES cells were injected. Consequently, they are not complete knockout mice. It is necessary to crossbreed such mice to produce lines of mice in which both copies of the gene (one on each chromosome) are knocked out in all tissues. Researchers refer to such mice as homozygous knockouts.

Which production method is best?

Both gene targeting and gene trapping have different strengths. The advantage of gene targeting is that if the DNA sequence of the target gene is known, researchers can precisely knock out the gene at a high rate of efficiency.

The advantage of gene trapping is that researchers do not need to know the DNA sequences of specific genes in order to knock them out. In addition, in gene trapping, a single vector can be used in a high throughput capacity to generate a suite of mice in which a variety of genes have been knocked out.

The disadvantage of gene trapping is that it is not as efficient or specific as gene targeting because not every successful insertion of artificial DNA into a gene leads to a loss of function. Researchers often must spend considerable time conducting tests to identify ES cells in which gene(s) actually have been knocked out. In addition, since gene trapping is a random process, certain genes may never get hit due to statistics or because the gene is not active in ES cells, which means they will not produce the marker indicating that the gene has been knocked out.