Genomics is transforming how we study, diagnose and treat cancer. 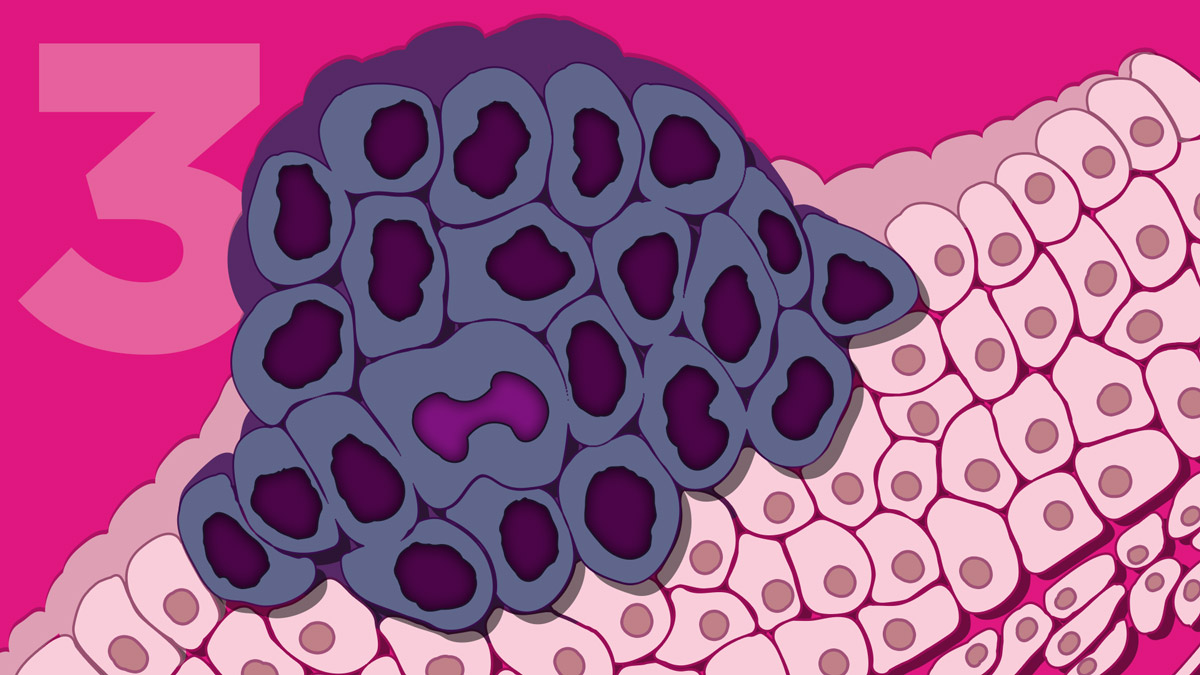 Did you know that we are increasingly able to detect cancers by testing just a blood sample? Or that we are moving toward treating cancers not by where they are found in the body, but by how their genomes have changed? Cancer is caused by changes in your genome, but advances in DNA sequencing technology are leading to a new understanding of cancer and new ways for diagnosing and treating many types of cancer.

Cancer is a group of genetic diseases that result from changes in the genome of cells in the body, leading them to grow uncontrollably. These changes involve DNA mutations in the genome. Our cells are constantly finding and fixing mutations that occur in our genome as the cells divide over and over again. But on rare occasions, some mutations slip through our cells' repair machinery, and those mutations can lead to cancer. The Human Genome Project has allowed us to establish what "normal" usually looks like for a human genome, so that we can now tell when changes in our genome have taken place that lead to cancer.

Large projects around the world, like The Cancer Genome Atlas in the United States and the Catalogue of Somatic Mutations (COSMIC) in the United Kingdom, have now determined the genome sequences of thousands of cancer samples of many cancer types. These projects have shown that some cancers have mutations in the same group of genes, even though they may have started in completely different tissues. Many of the mutations activate genes that normally promote cell growth or break genes that normally prevent cell growth. If we know more about the specific mutations that led to someone's cancer, no matter what tissue it was located in, then we can look for more specific and effective treatments for their cancer.

Using the Genome to Treat Cancer

Dr. Lukas Wartman, a physician and a researcher at Washington University, has both led cancer genomics efforts and experienced them himself. Lukas was diagnosed with a blood cancer called acute lymphoblastic leukemia (or ALL) in 2003, when he was in his fourth year of medical school. This led him to specialize in treating patients with leukemia, and studying the disease in the laboratory. While his university was helping pioneer cancer genome sequencing, Lukas suffered a relapse of his ALL with severe symptoms. So the laboratory, including Lukas's mentor, asked if they could study him.

The team compared the genome sequences of his normal cells and those of his cancerous blood cells. In his cancer's genome, they found mutations in a gene called FLT3. The team then found that there was an existing medication that could be used for treating patients with mutations in this gene. Although it had originally been approved for treating other cancers, not blood cancer, they tried it anyway. Lukas started taking the medicine on a Friday, and his blood counts already showed better results by Monday. After a number of weeks, the leukemia cells were no longer detectable in his blood, meaning his cancer was in remission. He will still need more treatment, but Lukas would not have survived without the results of the genome sequencing that pointed him to a new therapy.

There are over 10,000 clinical trials for new therapies in cancer that are recruiting right now in the United States. In addition, cases like Lukas' have led to the resurgence of "n-of-1" clinical trials, where doctors can gather enough information from just one patient to try a new therapy. Such trials are aided by patients who share their genomic data with researchers or even openly with other patients. Increasingly there is hope that as clinicians evaluate new cancer patients, they will be able to compare each new case with these large databases that might include positive responses to medications approved for a different cancer but with the same mutation(s), just like Lukas found for ALL.

Unfortunately, some cancers are harder to evaluate because looking at their genomes would require difficult and painful biopsies or operations where tiny parts of the cancer tissue are removed for study. This also makes it harder for clinicians to monitor how treatment is working for some cancers because repeated biopsies are just not possible. Recent breakthroughs now allow the detection of circulating tumor DNA (or ctDNA) in the blood of patients instead of directly sampling the tumor. As cancer cells grow very fast and die, they release some of their DNA into the bloodstream. We now have tests that are sensitive enough to detect and sequence these pieces of ctDNA in the bloodstream separately from the normal DNA of the patient - this is called a "liquid biopsy."

Although liquid biopsies are not yet in widespread use for cancer detection, improvements are being made all the time that move us closer to the routine use of ctDNA tests. One of the current approved uses for ctDNA is to test progression of non-small cell lung cancer by looking for specific mutations in the EGFR gene over time. Liquid biopsies can point to who will likely relapse after treatment, by detecting DNA with EGFR mutations that is circulating in the blood, sometimes better and more quickly than the now-used standard imaging techniques.

When Cancer Runs in Your Family

If you have a number of relatives who have developed cancer, you might be concerned about your own risk. By far, most cancers are not inherited, but there are a few examples of inherited cancers like Lynch syndrome (also known as hereditary non-polyposis colorectal cancer). This disorder is due to inherited mutations in any of six different genes, and leads to an increased risk of different types of cancers, most often in the colon. Breast cancer is another example; again most cases are not inherited, but men or women who have inherited mutations in the BRCA1 or BRCA2 genes have a much higher chance for developing breast cancer than other people. As we learn more about the genomic changes predisposing a person to cancer, we have been able to make screening tests available to many more people. The specific DNA sequences of the BRCA1 and BRCA2 genes were even the subject of a legal casethat went all the way to the United States Supreme Court, who ruled that the sequences of your genes could not be patented. Before this ruling, only one company could provide BRCA1 or BRCA2 testing in the United States, but now there are a number of companies who can help if you'd like to have genomic testing for hereditary causes of breast cancer.

You can learn more about fighting cancer through the games at Re-Mission 2. Cancer patients can learn more about current clinical trials through the NIH Clinical Trial Registry. If you have your own cancer genomic data that you'd like to share to help scientific discovery, you can talk to your oncologist and check out cBioPortal, Free the Data, or the Metastatic Breast Cancer Project.