Editing The Book Of Life With Molecular Scissors 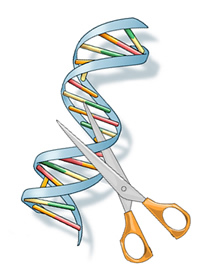 Editing the book of life with molecular scissors

Life's code is written in A's (adenine), T's (thymine), C's (cytosine) and G's (guanine), the letters representing the four nucleotides within the deoxyribonucleic acid (DNA) that direct the action of a cell from its nucleus. Three billion of these letters paired in two strands spell out the human genome sequence, a code scientists study every day looking for the causes of disease.

Thanks to ongoing research, we understand a lot about our DNA code.  We can read each person's unique sequence and analyze what differences among people cause disease.  But the ability to edit this book of life, and change a person's 'bad DNA' to 'good DNA' to treat disease, have proven difficult.

In February, two groups reported major advances towards this goal by cutting out an original DNA segment and pasting in a new segment of letters in human cells grown in the laboratory.  Le Cong and Ann Ran, graduate students at Harvard University working in the laboratory of Feng Zhang, Ph.D., worked with collaborators at MIT, Tsinghua University in Beijing, Columbia University, and The Rockefeller University.  And Prashant Mali, Ph.D., a postdoctoral research fellow, and Luhan Yang, a graduate student, both in the laboratory of George Church, Ph.D. at Harvard Medical School (whose research is supported by an NHGRI Centers for Excellence in Genomic Science (CEGS) grant), worked with colleagues at Boston University.  Both groups described cutting DNA in cells with a type of molecular 'scissors' known as Cas9 nuclease.

These researchers directed the nuclease scissors to a specific place in the billions of DNA letters using another nucleic acid, ribonucleic acid (RNA), which can bind to DNA.  Short stretches of RNA, attached to the scissors, search the DNA for their match and then bind the matching DNA tightly, allowing the scissors to cut the target DNA.  These short RNA-guide sequences are designed to find specific DNA segments among the billions of letters.  Using two RNA guides allows the section of DNA between the targets to be excised.  Dr. Mali and colleagues used computers to predict more than 190,000 sites in the genome that could be targeted using this system.

After the DNA is cut, it can be repaired in one of two ways.  The mismatched ends can recombine with themselves (this is known as non-homologous end joining or NHEJ), or a new DNA segment designed by scientists can be inserted in the same place that the original segment was removed (called homologous recombination or HR).  NHEJ can cause changes that lead to diseases such as cancer, while HR is safer and more accurate.  If only one strand of DNA is cut instead of both strands, the DNA is more likely to be repaired by the safer HR mechanism than the error-prone NHEJ.  Both groups changed the Cas9 nuclease scissors tool to only 'nick' one strand of DNA, instead of cutting through both strands.  This Cas9 'nickase' allowed scientists to paste in their designed replacement segment with fewer mistakes.

Scientists discovered the Cas9 nuclease scissors in Streptococcus pyogenes, the bacteria known for causing fever and painful 'strep' throat.  Discovery of this exciting tool in a lowly bacterium shows how important advances in human health can come from studying basic biological mechanisms in other species.

These scientists have demonstrated DNA editing only in human cells being grown in the laboratory, not a living human.  Today, editing genes in cells can help scientists study laboratory models of disease to learn why disease happens and to test new therapies.  But further advances may not be far off.  For example, this technology may be applied in plants to edit the DNA of crops to resist infection and produce higher yield.  Eventually, in humans DNA editing could repair bad genes that cause diseases like cystic fibrosis or sickle cell anemia at birth.  DNA editing may also repair genes that turn bad later in life and cause cancer.  The question becomes if we can harness the power of Cas9 to edit human genes, where should we stop?  As the famous science fiction writer H.G. Wells said, "No passion in the world is equal to the passion to alter someone else's draft."  Our most thoughtful leaders will need to study and weigh in on the ethical, legal and social implications of using this new technology to edit a person's genome as well as our food supply.

For now, this exciting discovery represents significant progress along the path to moving us from passive readers to active editors of our book of life.