Adult ADHD: An imbalance between the online and offline brain

A new study by researchers at the National Human Genome Institute (NHGRI) examined why some people grow out of childhood attention deficit hyperactivity disorder (ADHD), while others continue to have symptoms into adulthood.

Why Some People Outgrow ADHD

Researchers discovered that adults with ADHD persisting from childhood partly lose the usual balance of connections between brain networks that control action and those that control daydreaming or introspecting. Researchers have argued that this imbalance - between the brain "online" and the brain "offline"- might account for the lapses of attention that are found in ADHD. By contrast, adults who had "grown out" of their childhood ADHD, did not show such a loss of balanced brain activity, according to findings published October 31, 2017, in The Proceedings of the National Academy of Science (PNAS).

"We hope to understand the mechanisms that explain why some people outgrow ADHD and other do not," said Philip Shaw, B.M.B.Ch., Ph.D., senior author and an investigator in NHGRI's Social and Behavioral Research Branch. "If we can understand why some people can recover from ADHD, we also might be able to apply this knowledge to other neuro-developmental conditions like learning disabilities or problems with social interaction."

ADHD is a heritable and treatable brain disorder marked by inattention and/or hyperactivity-impulsivity that can cause great difficulties with impulse control, attention span in school, social situations and the workplace. Around 20 to 30 percent of people with ADHD retain the full syndrome as young adults and about 50 percent show partial, though not complete remission. 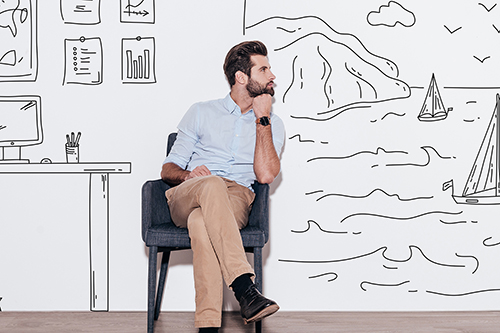 The researchers looked at brain function in 205 adult participants: 101 participants had been diagnosed with childhood ADHD and 104 subjects never had ADHD. They looked at changes in the brain's oxygen levels to determine the location of brain networks using functional magnetic resonance imaging (fMRI), and they studied the different levels of neuronal activity that by looking at the brain's magnetic fields using magnetoencephalography.

Regardless of the type of brain imaging used, the researchers found that adults who had inattentive symptoms persisting from childhood lost the usual balance of connections between the online and offline brain networks. Specifically, a network that is prominent when a person is introspective is usually switched off when a person engages in tasks. This balance was partly lost in the adults with persistent inattention. By contrast, this pattern of connections between brain networks in adults who outgrew ADHD looked very similar to the adults who never had ADHD. These findings support the theory that among individuals who recover from ADHD, there is a childhood disruption to brain function that corrects itself by adulthood.

"Most adults have a balance between the online, task-oriented brain and the offline, day-dreaming brain, but we found that's not the case for adults whose ADHD persists," said Gustavo Sudre, Ph.D., study co-author and postdoctoral research fellow in Dr. Shaw's lab. "We found that adults who recovered from ADHD had a very similar balance of online and offline brains to those who never had ADHD."

NHGRI's investment in this type of high impact, longitudinal research and the participants' long-term commitment to ADHD research make studies like this possible.

"We first met these individuals at the National Institutes of Health Clinical Center when they were eight years old," Dr. Shaw said. "They are so committed to ADHD research that they have kept coming back for 14 years. It's great to see so many of the children who had severe ADHD grow into adults who are managing very well."

In the next step of their research, Drs. Shaw and Gustavo will collaborate with an international ADHD research consortium to find genes associated with the disrupted brain networks.