LabGenius: The next step toward a digital laboratory

When John Didion, Ph.D., joined a research team as a doctoral student in genomics, he expected to see advanced technology in the laboratory. Alongside the advanced lab equipment, the computer-programmer-turned-computational-biologist found paper notebooks just like the ones Albert Einstein used nearly 100 years ago. And researchers' use of paper notebooks was ubiquitous, even among the most advanced research teams. This included the National Institutes of Health (NIH) laboratory he joined, headed by Francis Collins, M.D., Ph.D., intramural researcher at the National Human Genome Research Institute (NHGRI) and NIH director.

"It's easy to become comfortable with doing things a certain way in the lab, especially when it's something small - like using paper notebooks," said Dr. Collins. "That's why having scientists with different backgrounds and new perspectives is so important. They can help find solutions to problems you weren't even thinking about."

As Dr. Didion worked in the lab, he realized that while notebooks were inexpensive and easy to obtain, they were also fraught with problems. Ink could get smeared, pages could get lost and it was difficult to organize and extract data from multiple notebooks. Also vexing was the process of transcribing data from the physical to the digital page, which was both tedious and typo-prone. 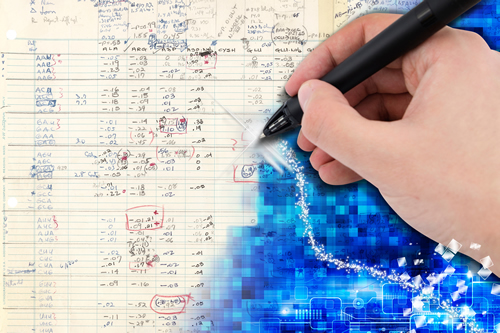 "Scientists tend to do pretty much everything-all their analysis, communication and publishing-on the computer," said Dr. Didion. "But they still had artifacts of the analog world in the form of lab notebooks. Then I learned about smart pens."

The smart pen is a space-age ballpoint pen embedded with a tiny camera that records the writer's every stroke and scribble. Using Bluetooth connectivity, researchers can instantly upload notes (or doodles) to a blank document page on a computer. What's more, if a lab is using multiple notebooks for the same experiment (or conducting multiple experiments), the smart pen can recognize which notebook is being used and upload the digital page to the correct digital notebook. Each page and notebook can be tagged with keywords for quick organization and later accessed by the whole team.

Though Dr. Didion had never used a smart pen before, he recognized its potential to solve problems posed by the physical notebooks. In the fall of 2014, he received a serendipitous email about the Ignite Accelerator program, a government-sponsored "idea accelerator."

"I sat down and thought, 'what are some things I might be able to improve in the lab?' " said Dr. Didion. "Everything kind of came together at that point."

The Ignite Accelerator program, funded and overseen by the Department of Health and Human Services (HHS), uses a framework akin to Silicon Valley start-ups. It provides seed funding and professional mentorship to nurture innovative ideas aimed at improving government operations.

"Ignite provides staff from across HHS the opportunity to try something new in their office," said Read Holman, director of the Ignite Accelerator and HHS IDEA Lab. "When you take smart, driven staff and cultivate their entrepreneurial spirit through some basic trainings, and then pressure cook an outcome by providing tight time-bound parameters, amazing things can happen."

Dr. Didion quickly formed the LabGenius team, applied and was accepted into the Winter 2015 Ignite group, along with a dozen other projects. Dr. Didion was eager to get smart pens into the hands of lab scientists, but Ignite mentors instead urged him to first talk with scientists about what they viewed as their data problems. As it turns out, spiral notebooks and transcription were not the scientists' top concern; rather it was a small part of a larger issue.

"I think we went into this with a very narrow scope, which was just to test out these smart pens," said Dr. Didion. "What we found by talking to researchers was that the problem was actually a lot more general. They have all of their data and other things spread out across a bunch of different media."

At first, Dr. Didion's team thought about abandoning the smart pens altogether. But the Ignite mentors pushed the team to pilot test the smart pens and move forward with the original idea, while considering a different angle for the project. The LabGenius team began considering a solution to the data problem that went beyond improving the lab data workflow.

Through their conversations, the LabGenius team identified the real problem: management of sprawling scientific research projects that include e-mail correspondence, meeting notes, multiple lab data notebooks, grant applications and documents being drafted for publication. Other pieces of their projects could even be located in different parts of the lab.

What scientists needed was a new lab data ecosystem. The LabGenius team broadened their idea to include the smart pens and a software package, giving researchers a centralized location for a variety of documents, including the digital lab notebooks.

"What differentiates our approach from other electronic lab notebooks is that we're treating the paper notebooks as a first-class citizen of a project, rather than attempting to replace it altogether," said Dylan McDiarmid, one of the programmers working on the software. "We're focusing on adding features that solve day-to-day problems for researchers, to help ease the transition into managing their project's data in a central place."

With this ambitious new plan, the LabGenius team began coding the software and field-testing the pens. Although the scientists couldn't fully incorporate the smart pens into their daily activity in the two-week trial period, they became convinced the pens could improve their workflow by allowing them to upload all the lab notebook data from the smart pens. Some of the scientists said it was "what they had always been looking for," said Dr. Didion.

The team also began developing software to solve the investigators' overarching problems. When completed, the software will help researchers working on the same project share documents, link documents to each project, make documents searchable with keywords and allow people to chat in real time as they work on their projects.

However, this isn't a one-size-fits-all solution, as different scientists have different data needs. To solve this, the team is also planning to create optional features that are tailored to specific scientific fields. The team will detail its findings in a white paper.

"This system has the potential to streamline our labs, removing some of the inefficiencies that come with all of the paperwork inherent in science," said Dr. Collins "It's weaving small changes into the fabric of the lab, which could have a big impact."

"Our goal is to develop a holistic data ecosystem that will be useful in labs all across NIH labs," Dr. Didion said. "We're not going to get rid of all paper notebooks in labs and that's okay. We want to offer researchers who are ready to make a change access to 21st century tools that will measurably improve their ability to do great science."

They're clearly on the right track. The team is currently working with NIH to secure additional funding for a larger trial. If that trial goes well they may even implement LabGenius in some, or perhaps all, NIH labs.