Linking genes to ADHD by mapping connections in the brain

When it comes to Attention-Deficit/Hyperactivity Disorder (ADHD), genetics do make an impact.

ADHD is as heritable as height," said Philip Shaw, Ph.D., a senior investigator at the Social and Behavioral Research Branch of the National Human Genome Research Institute (NHGRI). But, unlike some illnesses, which are determined by a single gene, ADHD is not easily pinned down. Many common but subtle differences in our DNA come together to have a huge influence on creating one of ADHD's cardinal symptoms; hyperactivity-impulsivity.

In a study published in the January 30 issue of Molecular Psychiatry, NHGRI researchers examined people with ADHD to map brain connections, called white matter tracts, tied to the disorder.

This study builds on research by the Psychiatric Genomics Consortium, a global network of investigators. The consortium searched through complete sets of DNA, or genomes, from research participants looking for small variations that might associate with ADHD. These variations, are so common that everyone will have some. However, for people with ADHD, the variations might occur more frequently. The consortium found that ADHD is associated with a pattern that includes hundreds of these common variants. They have little significance alone, but together they increase the genetic risk for certain symptoms of the disorder. The more ADHD related genetic variations a person has, the more likely they are to have ADHD. 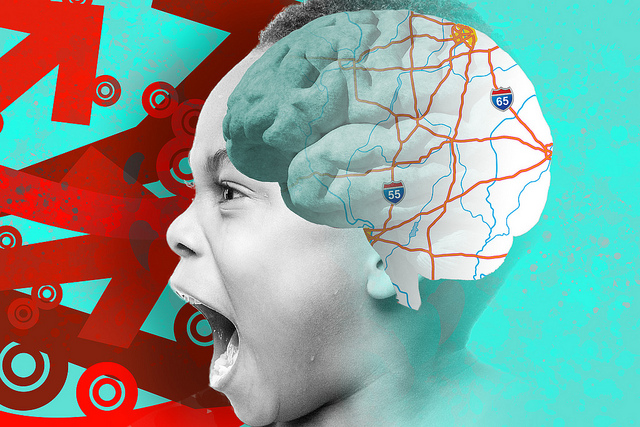 "Each variation has a tiny effect in isolation. Adding them all up can provide you with a 'genetic risk score' (called the polygenic risk score) that can predict the chances of having ADHD. It's far from a perfect prediction, but it's a very solid place to start." Dr. Shaw said.

Knowing which genes are associated with ADHD set the foundation for Shaw to understand how the genes act on the brain to bring about ADHD. Shaw and his team worked with 544 people with a genetic risk score predicting ADHD. Using magnetic resonance imaging (MRI), a form of medical imaging that uses a magnet to create pictures of internal organs, they took pictures of research participants' brains. Dr. Shaw's team was interested in the white matter, the tissue in the brain that contains the majority of nerve fibers. These fibers are like telephone wires, transferring information across the brain. The brain images allowed Dr. Shaw to map the 'telephone wires'- the white matter tracts. With advanced image processing, Shaw could see very subtle disruptions to the white matter tracts in people with ADHD.

Dr. Shaw honed in on a few regions where white matter disruptions were high, specifically the area that controls 'working memory.' This short-term memory helps a person remember a phone number while writing it down. Or, it helps them recall the price of grocery items while adding them up in their head. It isn't uncommon for people with ADHD to have poor working memory.

Shaw's team found that the genetic risk score was not only tied to the risk of having ADHD, but also to these white matter disruptions. Thus, this work begins to reveal the interconnection between genetic risk, brain structure, and ADHD symptoms.

"Once you understand mechanism, then you can start asking questions like, 'Could these genes be part of diagnosing ADHD? Might they give us new insights into treatment," Dr. Shaw said.

Dr. Shaw adds that there is still a lot of work to do. The disorder is complicated. It involves many genes and a variety of behaviors.

In 2011, 6.7 percent of US children - between the ages of 14 to 17 - were diagnosed with ADHD. Lacking proper treatment or accommodating schools, children can flounder academically and may never reach their full potential. Approximately one-third of children diagnosed with ADHD carry the disorder into adulthood possibly impacting their ability for career advancement. What's more, ADHD is a leading risk for mood disorders, substance abuse and even car accidents. With this work, today's treatments and medication, there is hope.

"Far down the line, understanding how genetic variation is tied to ADHD could begin to guide treatment," Dr. Shaw said, then cautions, "It may be years away, and I think it will only be a part of a very complicated set of tools we will use."