The PI award provides two phases of support over four years. In the first phase (K99), young investigators assume postdoctoral assignments that offer a strong foundation for independent research. The second phase (R00) is an independent research position - an important step in an academic career.

"The Pathway to Independence Award is a wonderful way for postdoctoral fellows to launch their careers in academia and open doors for additional funding," said Bettie Graham, Ph.D., director of NHGRI's Division of Extramural Operations. "The K99 provides investigators with an opportunity to learn how to manage a research project. The R00 gives fellows an opportunity to amass preliminary data in order to apply for the R01 grant, which is the traditional NIH investigator-initiated grant. "

A recent modification to the K99/R00 eligibility period, reducing it from five years to four, is designed to open the program to more Ph.D. graduates. The change will encourage more rapid advancement for PI awardees into permanent tenure-track or equivalent faculty positions.

Melissa Harris, Ph.D., is a postdoctoral fellow in the Section on Genomics, Development and Disease within NHGRI's Genetic Disease Research Branch. The PI award that supports her position is granted by the National Institute on Aging.

Dr. Harris studies genes and molecular pathways that contribute to healthy adult stem cells, cells that can potentially form many of the different cell types found in the body. Ultimately, she hopes to discover genes and cellular mechanisms that enhance the function of stem cells during a human's lifetime as a way to combat degenerative disease and the adverse effects of aging.

"These studies also tell us about how melanocytes function in adults and can inform us about critical pathways that may be misregulated in melanocyte cancer, or melanoma," said Dr. Harris. Melanocytes are cells that produce the black or dark brown pigment that naturally occurs in the hair or skin. Dr. Harris completed a bachelor's degree in genetics and a Ph.D. in cell and developmental biology at the University of California, Davis.

In addition to research, Dr. Harris is committed to higher education and mentoring. To advance this interest, she took pedagogy courses, classes that deal with the theory and practice of education, offered at NHGRI's Intramural Training Office (ITO). Postdoctoral fellows aren't officially trained in formal teaching techniques, so the ITO training helped prepare her for the administrative side of education.

"Those courses really got me over my fear," Dr. Harris said. "I've always loved teaching students and interacting with students, but planning and setting up a curriculum and lecture feels a little daunting. In those courses, they tell you steps you have to take and, as a result, the idea of teaching became so much more appealing to me."

As Dr. Harris transitions beyond NIH to future faculty positions, she will draw upon what she learned in the program and the support she received from her mentor, William Pavan, Ph.D., head of the Section on Genomics, Development and Disease.

Another PI participant, Stephen Parker, Ph.D., received his award from the National Institute of Diabetes and Digestive and Kidney Disorders, enabling him to become a postdoctoral fellow in NHGRI's Medical Genomics and Metabolic Genetics Branch.

Dr. Parker had attended East Carolina University (ECU) in Greenville, North Carolina, hoping to become a scientist and a soccer phenom. In his junior year, however, new coaches took the soccer team in a different direction, which curbed his athletic aspirations.

"That was probably a good thing because I wasn't focused on my course work as I should have been," said Dr. Parker. "Plus, it gave me an opportunity to dive more into science."

"Diabetes is a huge problem in America," Dr. Parker said. "I was curious about how the information is encoded in non-coding regions of the genome, and it looks like that's where most of the diabetes genetic predisposition resides."

"It was a perfect fit," said Dr. Parker. "Dr. Collins was a remarkable mentor despite a demanding schedule. He found time to talk to me not only about science, but about my career. We are still in touch through emails and phone calls."

Dr. Parker has transitioned into the R00 phase - the second component - of his PI award. He is an assistant professor in the Department of Computational Medicine and Bioinformatics, as well as the Department of Human Genetics, at the University of Michigan.

"I like mentoring the next generation of scientists," said Dr. Parker. "I can bring them into the labs and show them how exciting and rewarding it can be." He is preparing to open the Parker Lab, which is focused on generating mechanistic knowledge about how disease predisposition is encoded in the non-coding portion of the genome, with a focus on Type 2 diabetes. He is looking forward to integrating his twin passions: science and teaching.

This past fall, Dr. Parker was named one of five winners of the American Diabetes Association' Pathway to Stop Diabetes awards.

In addition to the intramural recipients, the NHGRI Extramural Research Program issued Pathway to Independence awards to outstanding, early-career researchers around the country. Their academic institutions and current research projects are listed. 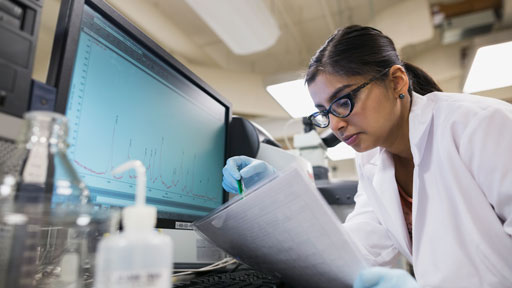