In the first study of its kind, an international team of genomics researchers has identified new regions of the human genome that are associated with skin color variation in some African populations, opening new avenues for research on skin diseases and cancer in all populations.

These findings may help researchers determine if humans with certain DNA sequences are more or less susceptible to DNA damage caused by ultraviolet radiation (UVR) or respond to cellular stress differently. National Institutes of Health researchers contributed to this effort, led by Sarah Tishkoff, Ph.D., at the University of Pennsylvania in Philadelphia. The findings were published October 12, 2017, in the journal Science.

Studying human skin pigmentation helps researchers understand how the cells that produce skin pigment - melanocytes - and genes work together to protect skin from the damaging effects of UVR. Because equatorial regions receive approximately two times more UVR than more temperate regions, darker pigmentation in people from these regions is thought to reduce skin damage and cancer. In contrast, lighter pigmentation of people in northern countries may increase the production of vitamin D3 needed to prevent rickets, a softening and weakening of bones in children, usually due to inadequate vitamin D.

Researchers studying genes that contribute to skin color for the last hundred years have focused on analyzing differences among European populations. This study of ethnically diverse populations in Ethiopia, Tanzania and Botswana has shed light on regions of the genome not previously associated with skin color. 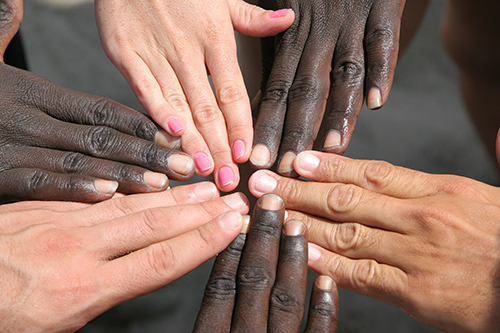 "This is transformative research because it provides new pathways for studying pigmentation and pigment cell diseases," said William Pavan, Ph.D., co-author of the study and senior investigator in the Genetic Disease Research Branch at NIH's National Human Genome Research Institute. "The paper also provides a foundation for others to investigate the DNA loci and associated genes that play roles in skin cancer susceptibility and the effects of UV radiation."

In this study, researchers sought to identify and functionally characterize regions of the human genome associated with skin color in African populations. To do this, they took color meter readings from the inner arms of 2,092 African participants to determine the levels of melanin in their skin. Melanin gives skin, hair, and eyes their color and protects skin cells from UVR. By measuring the skin pigmentation, researchers could learn about the underlying genomic alterations that were responsible for difference in skin pigmentation.

From a subset of 1,593 individuals, they sequenced blood DNA and analyzed it to determine the DNA variations - called alleles -- that were responsible for the differences in skin color. Genes in immediate proximity of these different DNA alleles included one that repairs DNA damage caused by UV light (DDB1), two that are associated with albinism (OCA2 and SLC24A5) and one that contributes to the production of a novel lysosomal protein (MFSD12). Lysosomes are subcellular structures that play roles in optimizing nutrition and fighting infections and now, with these findings, in skin pigmentation.

"This study also demonstrates that by focusing on the entirety of human populations, we can identify novel and underappreciated genomic alterations and pathways," said Stacie Loftus, Ph.D., co-author and staff scientist also in NHGRI's Genetic Disease Research Branch.