One little fish hooks genome researchers with its versatility

In the basement of a three-story brick building on the main campus of the National Institutes of Health live nearly half a million organisms that breathe underwater, develop from an egg so small it is barely visible to the naked eye and are striped like a zebra.

A Powerhouse Tool for Researchers

Aptly named and tiny in stature, the paper-clip sized zebrafish might fool you into thinking it hasn't much to offer. But this wee creature is making big waves in the sea of genomics research.

The zebrafish is a powerhouse tool that helps researchers better understand the genes that are implicated in disease. And, here at the National Human Genome Research Institute (NHGRI), researchers are advancing human health by coupling the potential of the fish with an institute-funded resource known as the NHGRI Zebrafish Core.

The core uses genome-editing technology to intentionally introduce small insertions or deletions in genes, making them non-functional. The researchers then study the mutant fish to understand the roles of "knocked out" genes in normal development and in human diseases, explained Raman Sood, Ph.D., the director of NHGRI's Zebrafish Core.

"They can request any single gene or multiple genes in a pathway they want knocked out," said Dr. Sood. "It's a service provided for NHGRI investigators."

Usually the genes are selected based on findings from human patient samples that have a particular genetic disease. These findings can be specific mutations that cause the gene to lose its normal function, lead to alternate functions or disturb when it's turned on or off. The next question to ask is: Does the same gene when knocked out in fish mimic the disease in humans? By approaching the study of genetic diseases in this way, researchers can confirm that genetic changes in the gene of interest are a contributing factor or the actual cause of a genetic disease.

NHGRI's Zebrafish Core also enables investigators at NHGRI to use multiple approaches to better understand a variety of human genetic diseases. There are projects that use transgenic fish with fluorescent markers to label specific types of cells, such as red blood cells; endeavors that test the effects of different therapeutics; and ventures that result in even tinier fish than their paper-clip-sized siblings without a genetic mutation. For these researchers, the reasons for using zebrafish as their model organism of choice are as varied as the diseases they study.

For Shawn Burgess, Ph.D., head of the Developmental Genomics Section, the rationale comes down to the fact that fish regenerate.

But in other vertebrates, like the zebrafish, the hearing receptors have the astounding capability to repair themselves.

The ability to regenerate hearing has been lost in humans and other mammals, he explained. His group is trying to answer the questions: "How can we turn hearing back on? How can we retrigger a program that has been lost in mammals? What are the genes responsible for this?"

The zebrafish's versatility can extend beyond questions about deafness to studying other disorders that impact the five senses. Blindness can be a symptom of a vitamin B12 metabolic disorder, explained Charles Venditti, M.D., Ph.D., head of the Organic Acid Research Section, who works on a group of genetic diseases resulting in disrupted metabolism.

To better understand the mechanisms contributing to the loss of eyesight, Dr. Venditti's group uses zebrafish created to glow. By breeding the mutant zebrafish with fish containing fluorescent markers in the retinal rods and cones and looking at their offspring, the Venditti lab can narrow down how the eye disease might develop in sick patients. An enhanced understanding of this process could ultimately lead to improved prevention or treatment options.

Brian Brooks, M.D., Ph.D., a collaborator of Dr. Venditti's at the National Eye Institute, and an adjunct investigator at NHGRI, is working towards understanding the genetics of an eye defect known as a coloboma, which is a missing piece of tissue in the lens, iris or retina. 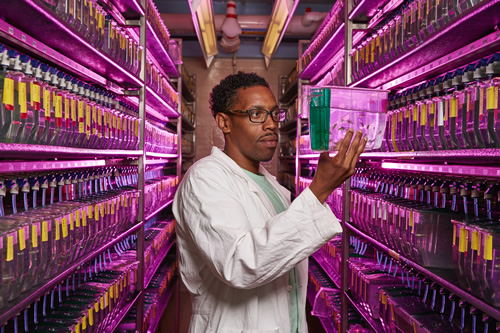 For Dr. Brooks' research program, using the zebrafish as a model is both practical and eye-opening."The zebrafish develop quickly and the eye is quite big and visible in this organism," he said.

Paul Liu, M.D., Ph.D., head of the Oncogenesis and Development Section, and his laboratory, explore the genomic changes that lead to certain blood cancers, such as leukemia.

Although Dr. Liu acknowledged that the zebrafish is not a proven model for leukemia, its transparent embryos develop in the water away from the mother, making it an ideal system to study the normal process of how blood cells are formed.

"This allows you to look at circulating blood cells during development," he said. "In a mouse model, this is not easy to do."

Since NHGRI's Zebrafish Core opened in 2006, its staff has generated over 500 different mutant and transgenic lines. In addition, other NHGRI investigators have independently generated large number of mutant lines. These mutant and transgenic fish make their home in the largest zebrafish facility in the country, with NHGRI owning half the space hosting a staggering 9,000 fish tanks.

Under the direction of Dr. Sood, the core has its own research program aimed at supporting the researchers and the programs that use it.

Dr. Sood and her staff hope to create more streamlined protocols for researchers to characterize their own mutant zebrafish lines, as well as generating "knock-in" and "gain-of-function" mutations for core users.

"The knock-in models are used for making the exact same mutations as seen in patients in the clinic," said Dr. Sood.

This approach is another way researchers can model human disease. Instead of knocking out the gene of interest to make it non-functional, a knock-in model might be a more faithful representation of what's occurring in human patients with certain diseases.

In support of the "idea of discovery, NHGRI's Zebrafish Core is a resource to identify genes or pathways that are similar across species, from zebrafish to human," said Dr. Venditti.