A relatively new method of targeting specific DNA sequences in zebrafish could dramatically accelerate the discovery of gene function and the identification of disease genes in humans, according to scientists at the National Human Genome Research Institute (NHGRI), part of the National Institutes of Health.

From Zebrafish to People

In a study posted online on June 5, 2015, and to be published in the July 2015 issue of Genome Research, the researchers reported that the gene-editing technology known as CRISPR/Cas9 is six times more effective than other techniques at homing in on target genes and inserting or deleting specific sequences. The study also demonstrated that the CRISPR/Cas9 method can be used in a "multiplexed" fashion - that is, targeting and mutating multiple genes at the same time to determine their functions.

"It was shown about a year ago that CRISPR can knock out a gene quickly," said Shawn Burgess, Ph.D., a senior investigator with NHGRI's Translational and Functional Genomics Branch and head of the Developmental Genomics Section. "What we have done is to establish an entire pipeline for knocking out many genes and testing their function quickly in a vertebrate model." Researchers often try to determine the role of a gene by knocking it out - turning it off or removing it - and watching the potential effects on an organism lacking it. 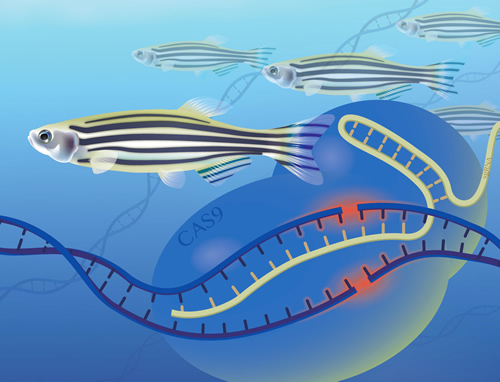 Such larger scale - termed high-throughput - gene targeting in an animal model could be particularly useful for human genomic research. Only 10 to 20 percent of recognized human genes have been subjected to such rigorous testing, Dr. Burgess said. The functions of many other genes have been inferred based on analyzing proteins or have been identified as possible disease genes, but the functions of those genes have not been confirmed by knocking them out in animal models and seeing what happens.

"This is a way to do that on a more cost-efficient and large scale," Dr. Burgess said.

"The study of zebrafish has already led to advances in our understanding of cancer and other human diseases," said NHGRI Director Eric Green, M.D., Ph.D. "We anticipate that the techniques developed by NHGRI researchers will accelerate understanding the biological function of specific genes and the role they play in human genetic diseases."

The CRISPR/Cas9 method of gene editing is one of the two essential components in the NHGRI team's high-throughput method. Modeled on a defense mechanism evolved by bacteria against viruses, CRISPR/Cas9 activity was first described in 2012. Since then, its use has spread quickly in genomic research labs in the United States and abroad.

The Cas9 protein is a nuclease, an enzyme that snips a stretch of DNA in two places, in effect cutting out a piece. Bound together, CRISPR/Cas9 becomes a powerful research tool that permits researchers to target and delete a particular sequence or to insert a new sequence into the DNA of animal-model embryos.

The other essential component of the NHGRI team's method is the zebrafish. The zebrafish and the mouse are the most commonly studied vertebrate laboratory animals whose genomes have been completely sequenced. The zebrafish is better suited to larger scale gene editing because about 70 percent of zebrafish genes appear to have human counterparts and the fish are far less costly to maintain than are mice. They multiply astonishingly quickly; a female may produce as many as 200 eggs at one time. And the embryos are fertilized externally and are transparent, making them readily accessible to researchers.

To demonstrate the feasibility of high throughput editing, the researchers targeted 162 locations in 83 zebrafish genes - about 50 of which are similar to human genes involved in deafness. (Hearing is one of the other interests of Dr. Burgess's lab.) This produced mutations in 82 of the 83 genes.

In screening embryos by fluorescent polymerase chain reaction (a technology that allows researchers to produce millions of copies of a specific DNA sequence) and high-throughput DNA sequencing, the researchers determined that overall, mutations were passed on to the next generation in 28 percent of cases. The transmission rate was higher for some genes than for others, but in most cases, screening offspring from parent fish should be enough to spot most mutations, the researchers reported.

The results demonstrated that using the CRISPR/Cas9 technique in zebrafish will make it possible to both generate mutants for all genes in the zebrafish genome and carry out large-scale phenotyping, they noted in the Genome Research paper.

The CRISPR/Cas9 methodology works in mice, too, but it is more costly and takes far longer. Although mice actually reach sexual maturity earlier than zebrafish, they produce far fewer offspring.

Ultimately, Dr. Burgess hopes that his lab will use the new method to knock out about 10 percent of the zebrafish's roughly 25,000 genes, and he would like to see an even broader effort. "We've shown that with relatively moderate resources, you can analyze hundreds of genes," Dr. Burgess said. "On the scale of big science, you could target every gene in the genome with what would be a relatively modest scientific investment in the low tens of millions of dollars."