Sarah Bates has been named the new chief of the Communications and Public Liaison Branch (CPLB) at the National Human Genome Research Institute (NHGRI).

In her new role, Bates will advise senior leadership on communications strategy and policy, and lead a communications program that promotes the institute's goals and scientific accomplishments to a broad array of stakeholders.

"Sarah brings a wealth of experience in science communications to her new position at NHGRI. In particular, her impressive body of work at the National Science Foundation and the Society for Neuroscience should serve her well in leading the institute's communications efforts. We are excited to have her join us," said Eric Green, M.D., Ph.D., NHGRI Director. 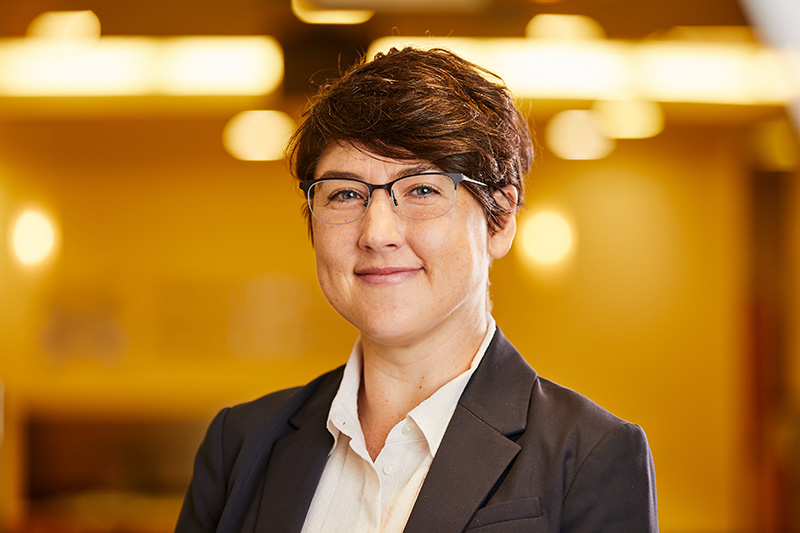 "My job will be to build upon the excellent work that NHGRI has done to create accessible, creative content and messaging to bolster and advance the institute’s reputation," said Bates. "Tomorrow's research depends on today's communications."

In her most recent position as a public affairs specialist for the National Science Foundation (NSF), Bates led communications for the Engineering Directorate and the BRAIN Initiative, a research effort to accelerate the development of new neurotechnologies.

In 2015, the Laser Interferometer Gravitational-Wave Observatory detected gravitational waves, tiny ripples in space and time when two black holes merge. Bates moved quickly to be one of the first to help share the news that gravitational waves are real and can be measured – something Einstein predicted a century ago. Then, two years later, she supported the communications effort when gravitational waves were detected again, which ultimately led to three scientists earning the Nobel Prize in Physics. This work built on Bates’ Master of Science degree in Astronomy, her first love because of how accessible it is, just by looking to the sky. Bates aims to make genomics research similarly accessible and fascinating through effective communications.

During her time at NSF, Bates covered topics from disaster response to quantum physics. She played a crucial role in announcing and sharing the recent NSF actions against sexual harassment. She created a media strategy and timeline that engaged other stakeholders, NSF staff, the press, the White House, and Congress. Her plan included working with communications specialists, web developers, and speechwriters to ensure there was a unified message. Ultimately, her work led to consistent press in publications such as the New York Times, BuzzFeed, and Science. The communications campaign finished with the first NSF Facebook Live event, a notable success.

Bates also worked to expand communications between NSF and regional science journalists. She organized events to host "breakfast discussions" with writers so they could discuss recent NSF advances and initiatives. In all, more than 40 journalists participated.

Bates' work at NSF did not go unnoticed. She earned the NSF Director's Award for Excellence Pioneer for "creative and effective communications that incorporated new platforms and capabilities to advance NSF and Engineering Directorate priorities strategically."

After six years at NSF, Bates is ready for the next challenge. A self-proclaimed "believer in equal-opportunity science," Bates says she is eager to dive deeper into the world of genomics.

Bates comes with a solid footing in project leadership. During her time at the Society for Neuroscience from 2010 to 2013, Bates led the planning and launch of BrainFacts.org. The site is a collaborative effort among several global nonprofit organizations dedicated to advancing brain research; it gained more than one million page-views in the first year, exceeding expectations.

As a communications leader, Bates continues to draw from her roots in journalism. She says that much of scientific language is "technical shorthand," and good communicators decode that shorthand into something everyone can understand and get excited about. She earned her second Master's degree in journalism at Syracuse University. One of her earliest professional jobs was writing three to five articles a day for Eagle Newspapers. There, she began to cover more and more science stories and, according to her, "built new muscles" for being a science communicator.

"The NHGRI Communications Chief should actively listen and work collaboratively to find the most effective ways to tell the institute's stories. We're in a constantly changing communications landscape. This is a great time to talk about genomics," said Bates, "My vision is to help make NHGRI communications reflective of the work being performed by genomics researchers – innovative, precise, engaging, and essential to people's daily lives."