A little-known ocean-dwelling creature most commonly found growing on dead hermit crab shells may sound like an unlikely study subject for researchers, but this animal has a rare ability ­– it can make eggs and sperm for the duration of its lifetime. This animal, called Hydractinia, does so because it produces germ cells, which are precursors to eggs and sperm, nonstop throughout its life. Studying this unique ability could provide insight into the development of human reproductive system and the formation of reproductive-based conditions and diseases in humans.

“By sequencing and studying the genomes of simpler organisms that are easier to manipulate in the lab, we have been able to tease out important insights regarding the biology underlying germ cell fate determination – knowledge that may ultimately help us better understand the processes underlying reproductive disorders in humans,” Dr. Andy Baxevanis, director of the National Human Genome Research Institute’s (NHGRI) Computational Genomics Unit and co-author of the paper. NHGRI is part of the National Institutes of Health.

In a study published in the journal Science, collaborators at NHGRI, the National University of Ireland, Galway, and the Whitney Laboratory for Marine Bioscience at the University of Florida, Augustine, reported that activation of the gene Tfap2 in adult stem cells in Hydractinia can turn those cells into germ cells in a cycle that can repeat endlessly.

In comparison, humans and most other mammals generate a specific number of germ cells only once in their lifetime. Therefore, for such species, eggs and sperm from the predetermined number of germ cells may be formed over a long period of time, but their amount is restricted. An international team of researchers have been studying Hydractinia’s genome to understand how it comes by this special reproductive ability.

Hydractinia lives in colonies and is closely related to jellyfish and corals. Although Hydractinia is dissimilar to humans physiologically, its genome contains a surprisingly large number of genes that are like human disease genes, making it a useful animal model for studying questions related to human biology and health.

Hydractinia colonies possess feeding polyps and sexual polyps as a part of their anatomy. The specialized sexual polyps produce eggs and sperm, making them functionally similar to gonads in species like humans.

During human embryonic development, a small pool of germ cells that will eventually become gametes is set aside, and all sperm or eggs that humans produce during their lives are the descendants of those original few germ cells. Loss of these germ cells for any reason results in sterility, as humans do not have the ability to replenish their original pool of germ cells. 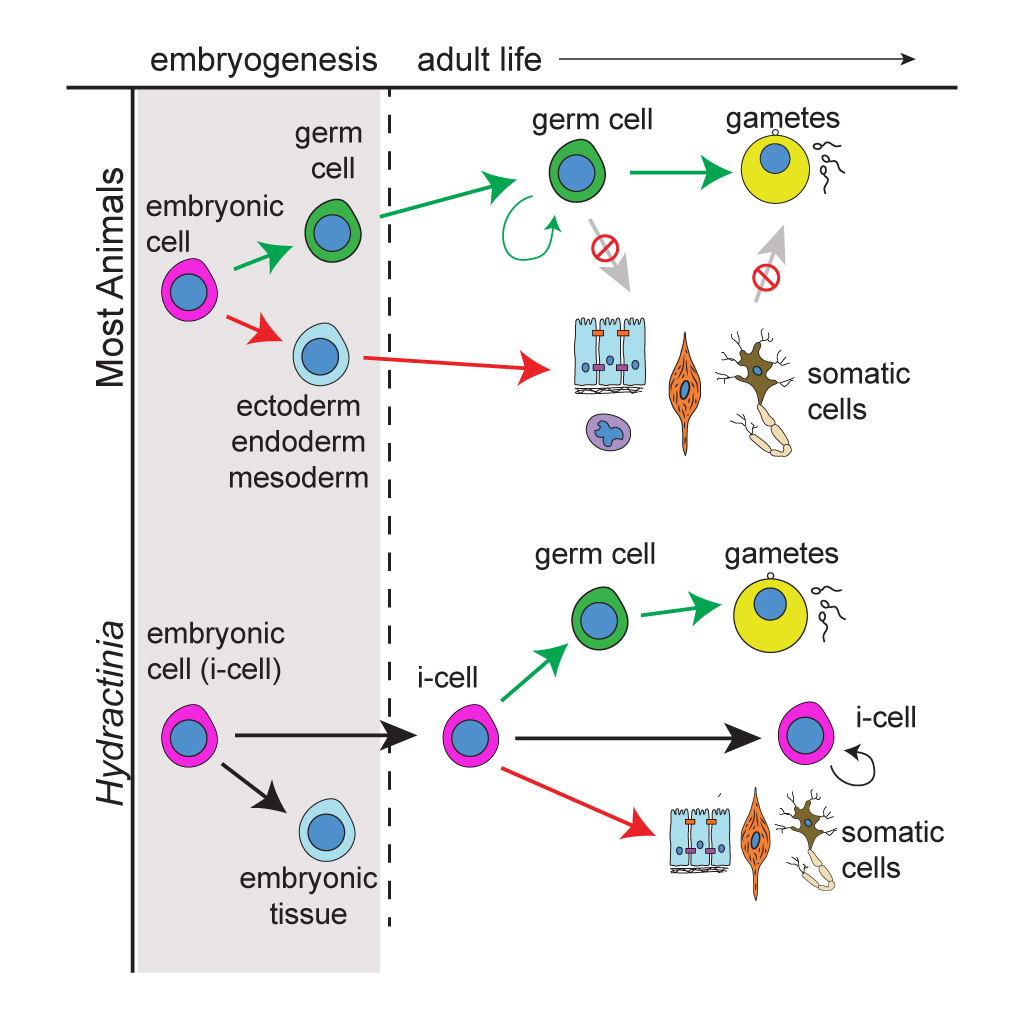 In a separate study, Dr. Baxevanis at NHGRI and Dr. Christine Schnitzler at the Whitney Lab have completed the first-ever sequencing of the Hydractinia genome. In this study, researchers used this information to scrutinize the organism’s genome for clues as to why there are such marked differences in reproductive capacity between one of our most distant animal relatives and ourselves.

“Having this kind of high-quality, whole-genome sequence data in hand allowed us to quickly narrow down the search for the specific gene or genes that tell Hydractinia’s stem cells to become germ cells,” said Dr. Baxevanis.

The researchers compared the behavior of genes in the feeding and sexual structures of Hydractinia. They found that the Tfap2 gene was much more active in the sexual polyps than in the feeding polyps in both males and females. This was a clue that the gene might be important in generating germ cells.

The scientists next confirmed that Tfap2 was indeed the switch that controls the process of perpetual germ cell production. The researchers used the CRISPR-Cas9 gene-editing technique to remove Tfap2 from Hydractinia and measured the resulting effects on germ cell production. They found that removing Tfap2 from Hydractinia stops germ cells from forming, bolstering the theory that Tfap2 controls the process.

Interestingly, the Tfap2 gene also regulates germ cell production in humans, in addition to its involvement in myriad other processes. However, in humans, the germ cells are separated from non-germ cells early in development. Still, despite the vast evolutionary distance between Hydractinia and humans, both share a key gene that changes stem cells into germ cells.

This press release describes a basic research finding. Basic research increases our understanding of human behavior and biology, which is foundational to advancing new and better ways to prevent, diagnose and treat disease. Science is an unpredictable and incremental process — each research advance builds on past discoveries, often in unexpected ways. Most clinical advances would not be possible without the knowledge of fundamental basic research.

Description: Although Hydractinia is dissimilar to humans physiologically, its genome contains a surprisingly large number of genes.

Piwi1-positive spermatogonia are shown in yellow; cell nuclei are in turquoise. Germ cell induction and all stages of gametogenesis can be visualized in these clonal animals. 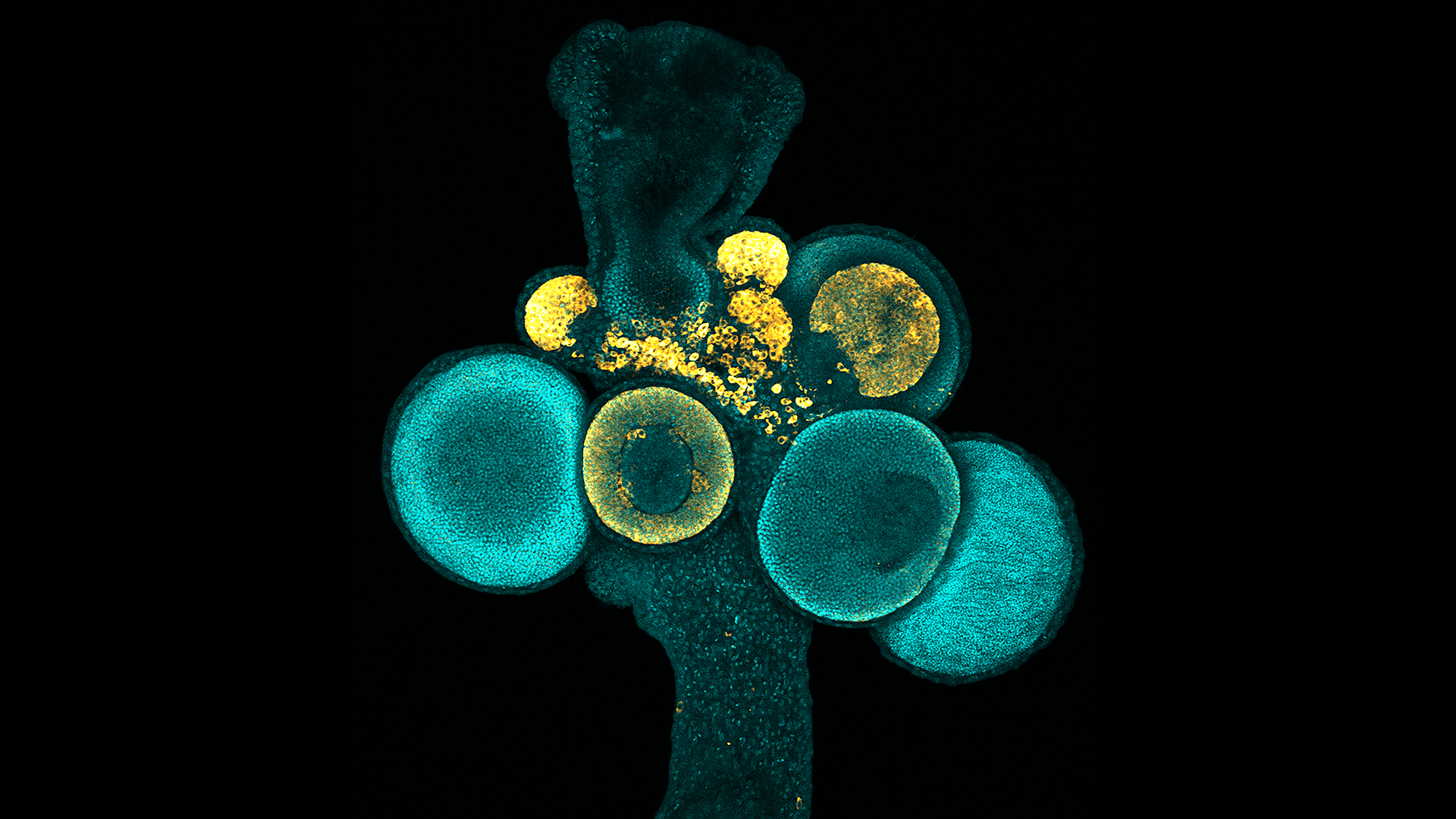 A female sexual polyp of the cnidarian Hydractinia symbiolongicarpus

Description: The researchers compared the behavior of genes in the feeding and sexual structures of Hydractinia.

Piwi1-positive oocytes are shown in yellow; cell nuclei are in turquoise. Germ cell induction and all stages of gametogenesis can be visualized in these clonal animals. 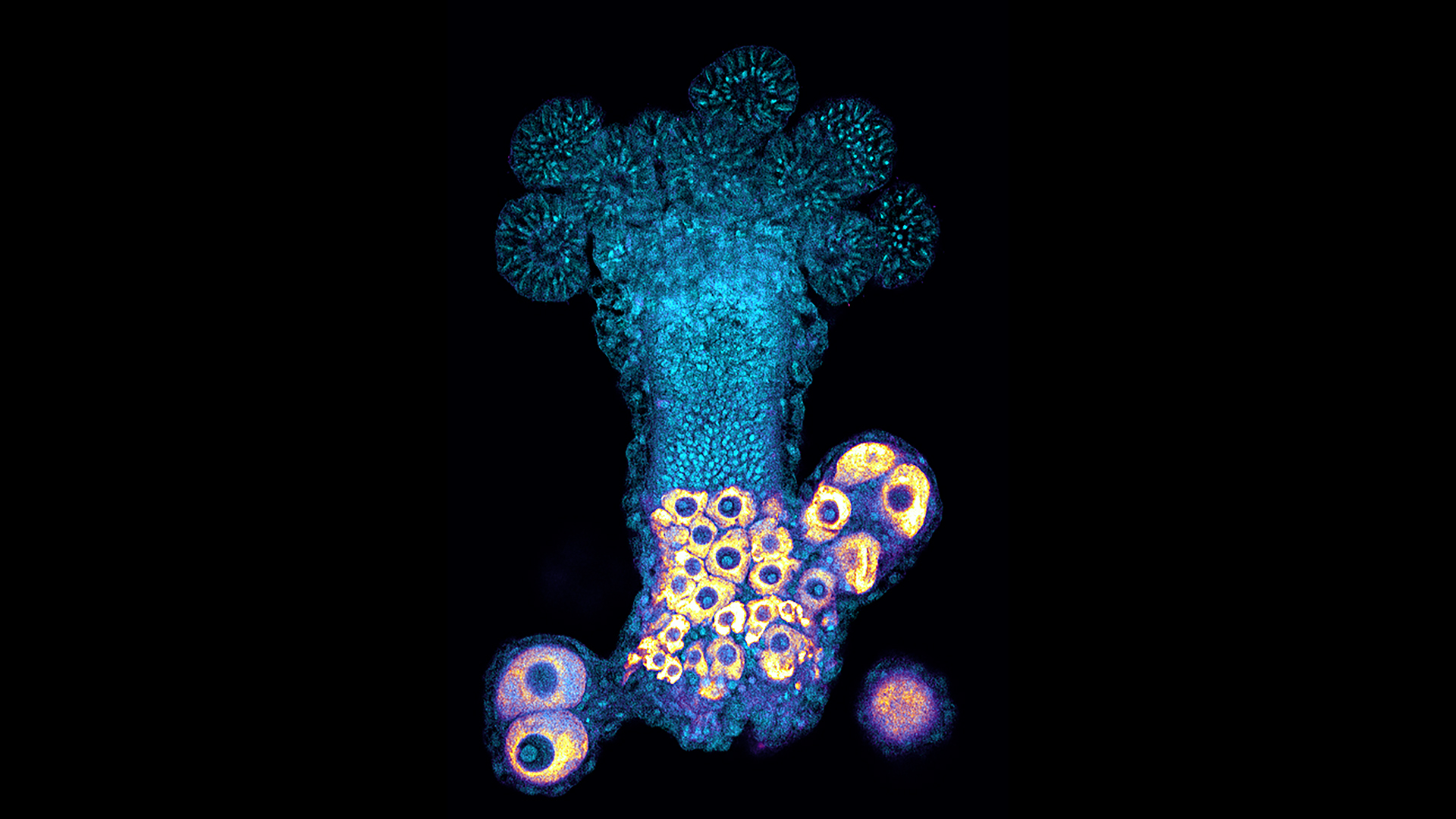 A male sexual polyp of the cnidarian Hydractinia symbiolongicarpus

Description: Hydractinia colonies possess feeding polyps and sexual polyps as a part of their anatomy.

Piwi1-positive spermatogonia are shown in yellow; spermatocytes are purple; cell nuclei are in turquoise. Germ cell induction and all stages of gametogenesis can be visualized in these clonal animals. 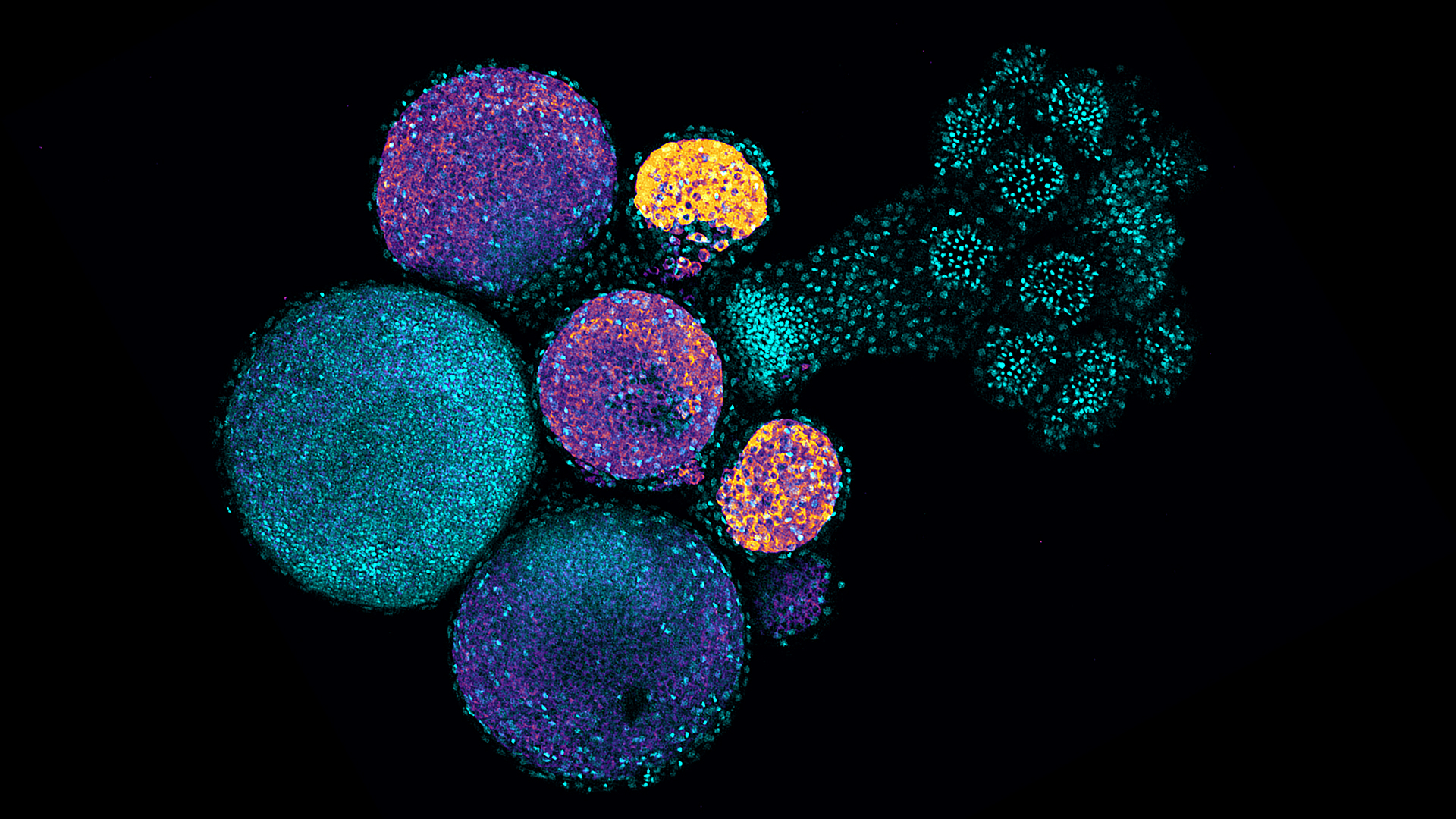