Doctors and researchers reunite with patient who received gene therapy for GM1 gangliosidosis.

In a sun-lit conference room at the National Institutes of Health in Bethesda, Maryland, Cyndi Tifft, M.D., Ph.D., prepares for a tea party. She lays out plates of cookies, chips and nuts. At the head of the table are tall silver teapots, gold-rimmed teacups and multi-colored teabags.

Dr. Tifft, the deputy clinical director at the National Human Genome Research Institute (NHGRI), prepares a tea party every time her patient Jojo (last name withheld for privacy) comes to visit. But today is extra special. It has been three years since they last saw each other.

A rare and debilitating disorder

Only about one in 100,000 to 200,000 babies are born with GM1 gangliosidosis, a genetic disorder caused by alterations in the DNA of a single gene, the GLB1 gene. The GLB1 gene makes an important enzyme that helps to break down molecules within cells. Without a functioning version of the GLB1 gene, molecules accumulate and wreak havoc on the cells of the nervous system.

Little was known about GM1 gangliosidosis until about a decade ago, when Dr. Tifft started a study documenting the symptom progression of children with the disorder. That’s when she met Jojo.

“This is a fairly relentless disorder,” said Dr. Tifft. “Over time, the patients lose their ability to walk and to talk.”

Scientists have described more than 7,000 rare disorders, the vast majority of which are thought to be caused by alterations in the patient’s DNA. Each rare disorder affects a small population, but when considered together, they affect about 30 million people in the United States; collectively, rare disorders are not so rare. Often, these disorders can cause very severe medical challenges.

Fewer than 5% of rare disorders have effective treatments. GM1 gangliosidosis is amongst the majority for which a specific treatment is being sought. With no treatment, clinicians can only find ways to help patients manage their symptoms. In the most severe form of GM1 gangliosidosis, few patients survive past childhood.

Gene therapy as an emerging treatment for rare disorders

Over the last few decades, scientists have been exploring different ways to treat GM1 gangliosidosis. In some cases, they have developed drugs that enter the nerve cells to try to fix issues within the altered protein.

But one approach — gene therapy — goes to the root of the problem. Instead of leaving patients to rely on the faulty gene that is causing their disorder — in this instance, the GLB1 gene — gene therapy delivers a functional copy of the gene so that the nerve cells can carry on as normal.

Gene therapy is typically a one-time treatment, with regular follow-up appointments then used to monitor the patient’s progress and the possible development of adverse reactions. For Jojo, that meant that after receiving gene therapy treatment in 2019, clinicians monitored her closely with visits every few months. They regularly ran tests to check motor skills, cognition and communication.

Because most rare genetic disorders are due to a single faulty gene, gene therapy offers a promising option for patients. With the chronic nature of many of these disorders, researchers hope that gene therapy can provide long-term benefit.

Like all treatments, gene therapy has risks. Sometimes the body’s immune system rejects the treatment. Inflammation may occur.

Gene therapy has come a long way since the first trial more than 30 years ago. With improved methods and technologies, recent advances have made gene therapy safer and more effective. Currently, gene therapy is an approved treatment option for several disorders, such as melanoma and spinal muscular atrophy. Before a new gene therapy treatment is approved, clinical trial research must be conducted with research participants, such as Jojo. 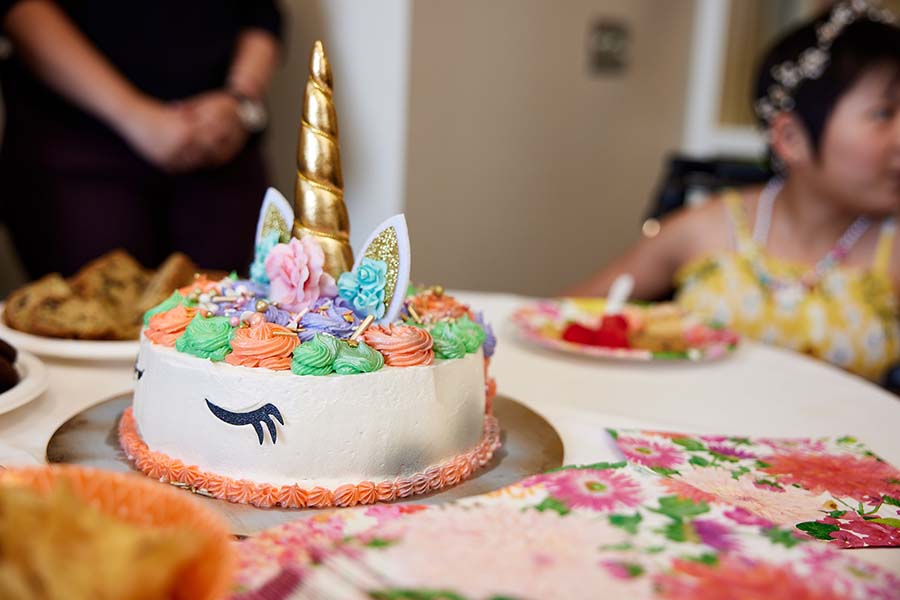 One of Jojo’s clinicians made a unicorn cake for the tea party. Credit: Ernesto Del Aguila III, NHGRI.

When researchers found a way to use gene therapy to successfully treat GM1 gangliosidosis in mice and cats, it gave Dr. Tifft and her team enough hope to try the same treatment in humans.

Jojo was the first patient to receive gene therapy for GM1 gangliosidosis, and there were many unknowns involved.

“We had never done this before, and we didn’t know what was going to happen,” said Dr. Tifft. “This was the first in-human trial.”

Three years after her gene therapy trial, Jojo (now 13 years old) sits in her chair and smiles as the room fills with people who came to join her tea party. Before she received gene therapy, she couldn’t sit up or feed herself.

“As a mom, I was living in fear every day,” said Jojo’s mother, Lei. “I was worried that I would lose her. After gene therapy, she’s much happier, and she’s getting stronger each day. She’s no longer in pain.”

“She likes to go shopping, and she likes to stay up late. She even negotiates with us about the kind of clothes she can wear.”

“The difference is night and day,” said Jojo’s father, David. “Looking at the girl she was before and how she is now, I don’t see how she would be where she is now without the treatment.”

When Jojo grabs a chip with her fingers and puts it in her mouth, Dr. Tifft beams. Jojo had previously lost the ability to feed herself before her treatment. But today is different.

“The things she can do and the quality of life she has now — it's such a big change,” said Dr. Tifft.

Since Jojo’s successful gene therapy trial, Dr. Tifft and her team have treated 10 more children who have GM1 gangliosidosis.

“Depending on how far the disorder had progressed in these patients, we weren’t sure how much of their abilities they were going to get back with the treatment,” Dr. Tifft said. “But things have turned out better than we thought.”

Dr. Tifft’s team had hoped that gene therapy would at least slow down the disorder and prevent the symptoms from getting worse. But some patients, like Jojo, were able to pick up and eat food again on their own. In a few more years, she may even be able to regain more skills that she had lost due to her disorder.

With these promising results, Dr. Tifft hopes to use gene therapy to treat other rare genetic disorders, such as Tay-Sachs disease — a fatal condition that similarly attacks the nerve cells.

Dr. Tifft is also working to improve genetic screening tests for newborns. Current genetic screening programs detect up to around 70 conditions, including disorders such as cystic fibrosis and sickle cell anemia. But many rare disorders that could benefit from early intervention — like GM1 gangliosidosis — are not included in the screening process. With an earlier diagnosis and new treatment options, patients’ families could seek treatment sooner, which could change the course of their lives.

“We are moving science and medicine forward with clinical trial research. It’s a slow process because research can be slow, but it’s happening,” Dr. Tifft says.

For now, she has a tea party to attend.