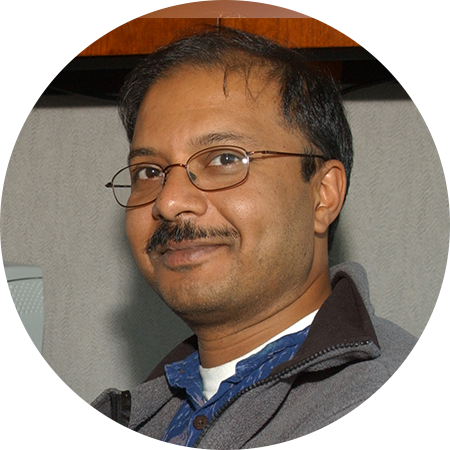 Dr. Ajay Pillai joined the National Human Genome Research Institute's (NHGRI) Division of Extramural Research in 2007, and is part of the NHGRI team responsible for Molecular Libraries Program (MLP), jointly managed with National Institute of Mental Health for the Common Fund. The MLP project is designed as a major public effort in translational science and chemical genomics. Dr. Pillai contributes to oversight of data analysis, bioinformatics and cheminformatics and computational aspects of the project. He is a co-lead on the Library of Integrated Network-based Cellular Signatures (LINCS), another Common Fund project whose aim is to generate a public resource that enables access to perturbation-induced (small molecule and RNAi) molecular and cellular signatures. He also manages a portfolio of grants in bio- and chem-informatics tools for ontologies and chemical genomics informatics.

Prior to joining NHGRI, Dr. Pillai was a Scientific Fellow at Celera Genomics where he led efforts in drug discovery informatics. Before that he was in the Laboratory of Molecular Pharmacology at the National Cancer Institute as a Staff Scientist. Prior to that at Vertex Pharmaceuticals working as a computational scientist.

Dr. Pillai received a M.Sc. in Physics from Indian Institute of Technology, Kanpur, India. He has a Ph.D. in Physics from UNC Chapel Hill and a postdoctoral fellow in the Department of Pharmaceutical Chemistry at UCSF.