Chromosomes are thread-like structures located inside the nucleus of animal and plant cells.

What is a chromosome?

Chromosomes are thread-like structures located inside the nucleus of animal and plant cells. Each chromosome is made of protein and a single molecule of deoxyribonucleic acid (DNA). Passed from parents to offspring, DNA contains the specific instructions that make each type of living creature unique.

The term chromosome comes from the Greek words for color (chroma) and body (soma). Scientists gave this name to chromosomes because they are cell structures, or bodies, that are strongly stained by some colorful dyes used in research.

What do chromosomes do?

The unique structure of chromosomes keeps DNA tightly wrapped around spool-like proteins, called histones. Without such packaging, DNA molecules would be too long to fit inside cells. For example, if all of the DNA molecules in a single human cell were unwound from their histones and placed end-to-end, they would stretch 6 feet.

For an organism to grow and function properly, cells must constantly divide to produce new cells to replace old, worn-out cells. During cell division, it is essential that DNA remains intact and evenly distributed among cells. Chromosomes are a key part of the process that ensures DNA is accurately copied and distributed in the vast majority of cell divisions. Still, mistakes do occur on rare occasions.

Changes in the number or structure of chromosomes in new cells may lead to serious problems. For example, in humans, one type of leukemia and some other cancers are caused by defective chromosomes made up of joined pieces of broken chromosomes.

It is also crucial that reproductive cells, such as eggs and sperm, contain the right number of chromosomes and that those chromosomes have the correct structure. If not, the resulting offspring may fail to develop properly. For example, people with Down syndrome have three copies of chromosome 21, instead of the two copies found in other people. 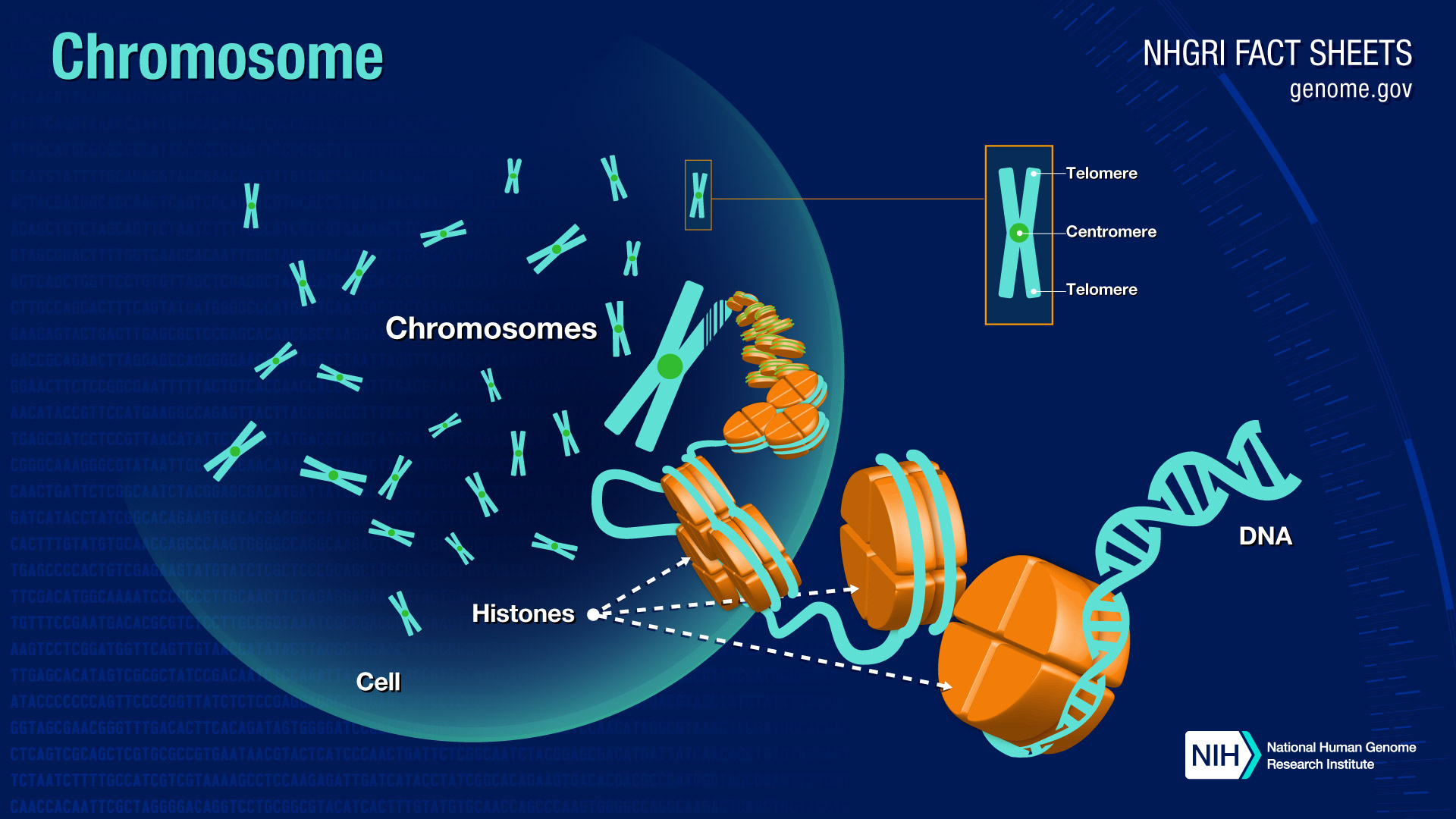 Do all living things have the same types of chromosomes?

Chromosomes vary in number and shape among living things. Most bacteria have one or two circular chromosomes. Humans, along with other animals and plants, have linear chromosomes that are arranged in pairs within the nucleus of the cell.

Besides the linear chromosomes found in the nucleus, the cells of humans and other complex organisms carry a much smaller type of chromosome similar to those seen in bacteria. This circular chromosome is found in mitochondria, which are structures located outside the nucleus that serve as the cell's powerhouses.

Scientists think that, in the past, mitochondria were free-living bacteria with the ability to convert oxygen into energy. When these bacteria invaded cells lacking the power to tap into oxygen's power, the cells retained them, and, over time, the bacteria evolved into modern-day mitochondria.

Centromeres help to keep chromosomes properly aligned during the complex process of cell division. As chromosomes are copied in preparation for production of a new cell, the centromere serves as an attachment site for the two halves of each replicated chromosome, known as sister chromatids.

Telomeres are repetitive stretches of DNA located at the ends of linear chromosomes. They protect the ends of chromosomes in a manner similar to the way the tips of shoelaces keep them from unraveling.

In many types of cells, telomeres lose a bit of their DNA every time a cell divides. Eventually, when all of the telomere DNA is gone, the cell cannot replicate and dies.

White blood cells and other cell types with the capacity to divide very frequently have a special enzyme that prevents their chromosomes from losing their telomeres. Because they retain their telomeres, such cells generally live longer than other cells.

Telomeres also play a role in cancer. The chromosomes of malignant cells usually do not lose their telomeres, helping to fuel the uncontrolled growth that makes cancer so devastating.

How many chromosomes do humans have?

In fact, each species of plants and animals has a set number of chromosomes. A fruit fly, for example, has four pairs of chromosomes, while a rice plant has 12 and a dog, 39.

How are chromosomes inherited?

In humans and most other complex organisms, one copy of each chromosome is inherited from the female parent and the other from the male parent. This explains why children inherit some of their traits from their mother and others from their father.

The pattern of inheritance is different for the small circular chromosome found in mitochondria. Only egg cells - and not sperm cells - keep their mitochondria during fertilization. So, mitochondrial DNA is always inherited from the female parent. In humans, a few conditions, including some forms of hearing impairment and diabetes, have been associated with DNA found in the mitochondria.

Do males have different chromosomes than females?

Inheriting too many or not enough copies of sex chromosomes can lead to serious problems. For example, females who have extra copies of the X chromosome are usually taller than average and some have mental disability. Males with more than one X chromosome have Klinefelter syndrome, which is a condition characterized by tall stature and, often, impaired fertility. Another syndrome caused by imbalance in the number of sex chromosomes is Turner syndrome. Women with Turner have one X chromosome only. They are very short, usually do not undergo puberty and some may have kidney or heart problems.

How were chromosomes discovered?

Scientists looking at cells under the microscope first observed chromosomes in the late 1800s. However, at the time, the nature and function of these cell structures were unclear.

Researchers gained a much better understanding of chromosomes in the early 1900s through Thomas Hunt Morgan's pioneering studies. Morgan made the link between chromosomes and inherited traits by demonstrating that the X chromosome is related to gender and eye color in fruit flies.