Viruses are all around us. What are they and how can they affect human health?

What is a virus?

Viruses are tiny infectious particles that are halfway between living and nonliving organisms. They are so small (a millionth of a millimeter) that it would take hundreds to thousands of them to cover the end of a human hair. Each virus is composed of genetic material wrapped in a protein coat. Viruses that infect plants and animals also have a layer of fat molecules. Viruses cannot reproduce on their own. Instead, viruses replicate by infecting a host cell (such as humans, other animals, plants or bacteria), hijacking the host's biological machinery and turning the host cell into a virus-producing factory.

What are viruses made of?

Most viruses have the same basic structure:

The protein layer allows viruses to fuse with the outer layer of the cells they attack. The nucleic acid portion encodes genes to make proteins that are essential for the virus to function. These proteins direct viral replication and carry out other activities, such as evading host defenses.

How many viruses exist on Earth?

Researchers estimate that 10 nonillion (10 followed by 30 zeroes) individual viruses exist on Earth. If all the 1030 viruses were organized in a single-file fashion, they would stretch for over 100 million light-years (a single light-year is 6 trillion miles) — which is four times the distance from Earth to the Canis Major Dwarf, our closest galaxy!

But only a tiny fraction of the viruses on Earth affect humans. Approximately 200 different viruses are known to cause disease in humans, including: 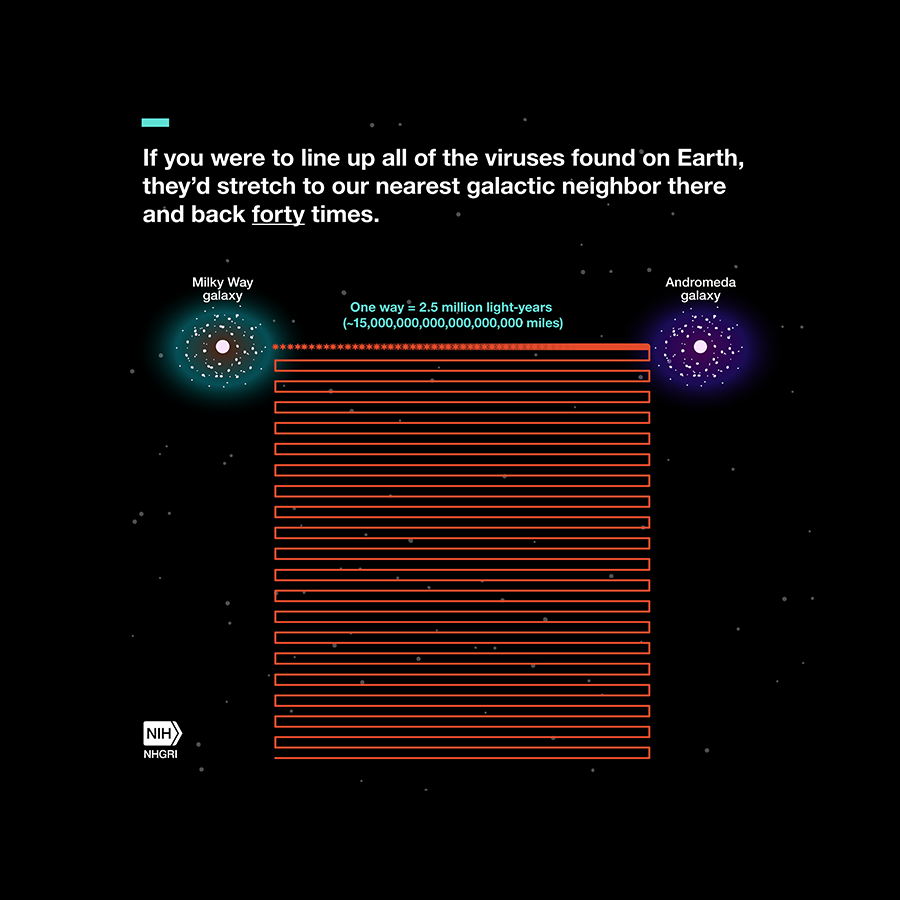 How are viruses transmitted?

Viruses can be transmitted in many ways, including by: 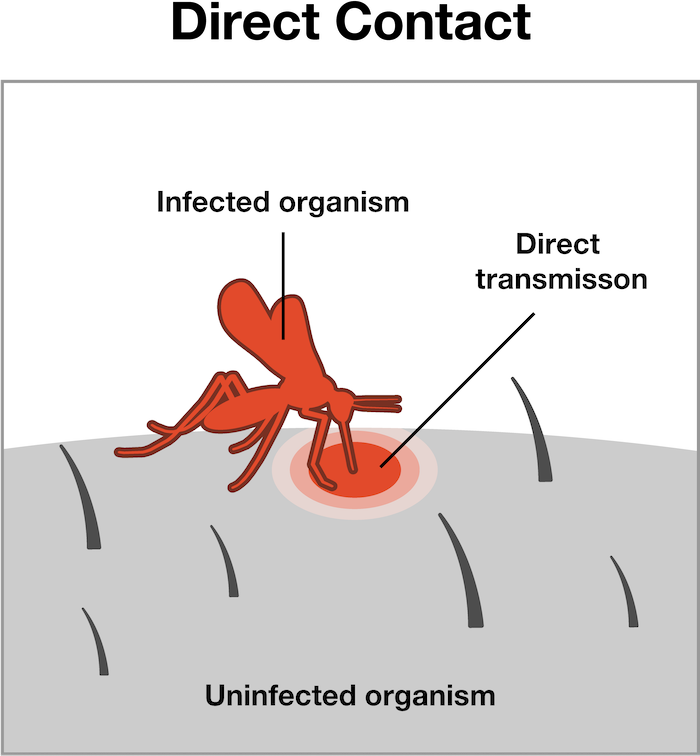 Direct contact with an infected organism, such as being bitten by a mosquito infected with the West Nile virus. When viruses (and other pathogens) move from one species to another, it is known as a spillover event. 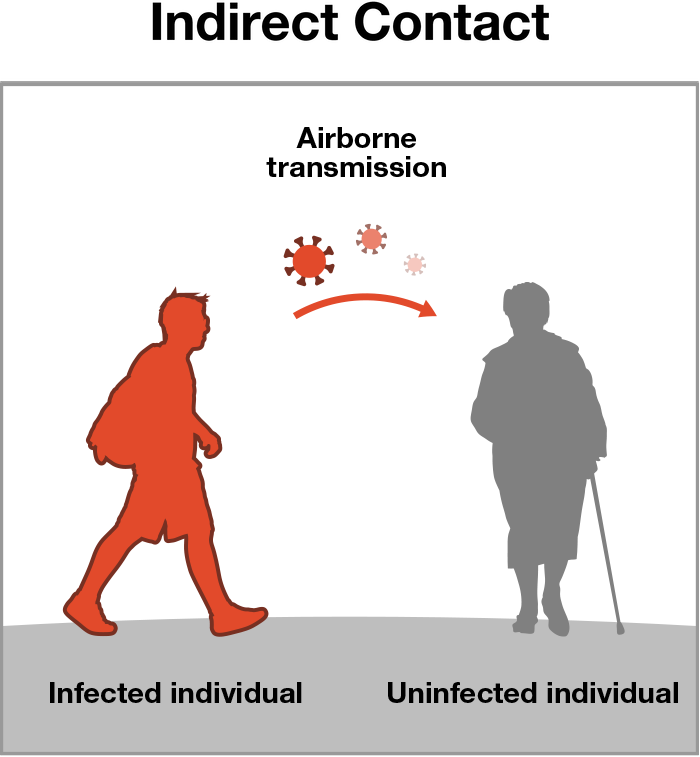 Indirect contact with someone who is infected, such as through respiratory droplets from a person who is coughing or sneezing.

Airborne or surface transmission, such as touching a surface where infectious viruses are still located minutes to hours after they landed there, can also result in viral transmission.

How do viruses infect living organisms? 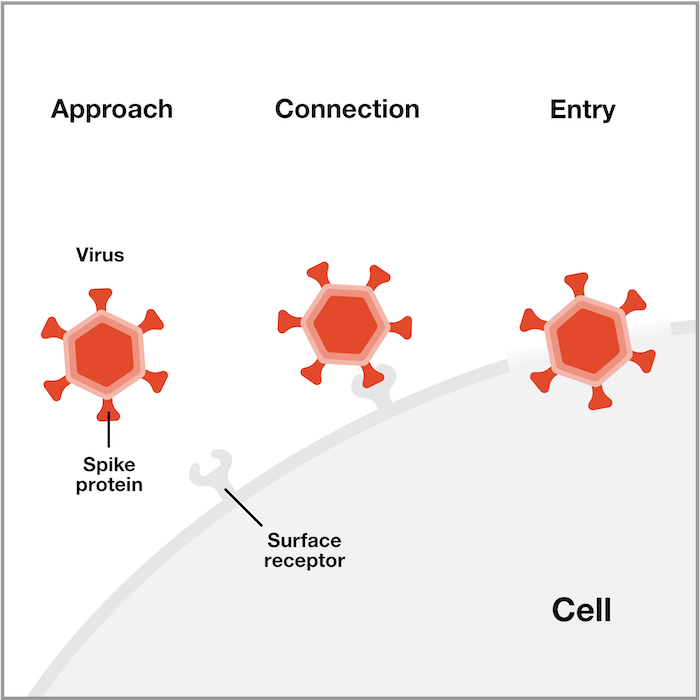 Viruses have proteins on their surface that typically latch onto a specific molecule on the surface of a host cell, called a receptor. The viral surface molecule can be likened to a specific key, while the host cell receptor is a lock. When the key meets the lock, it opens a door for the virus to enter the cell. 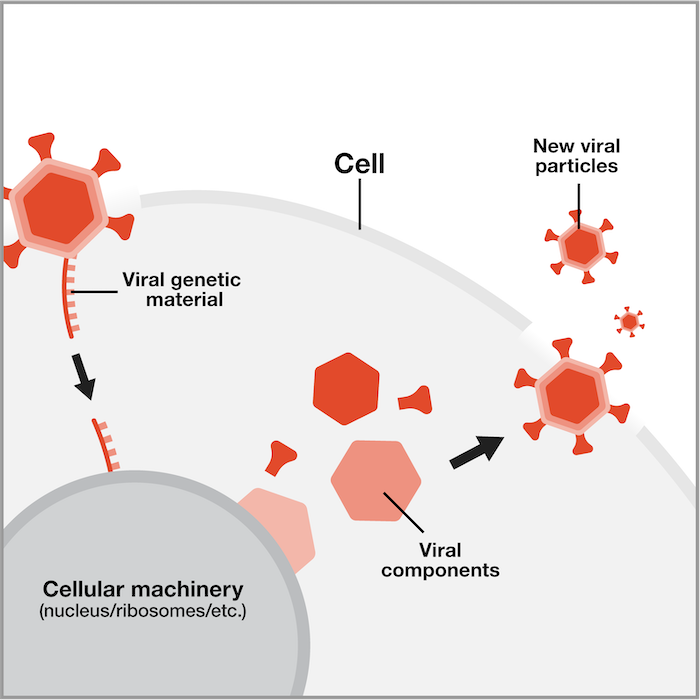 Once a virus successfully replicates itself, it leaves the host cell to infect other cells. Some viral infections cause no symptoms. However, when many viral particles infect an organism's cells at the same time, they may cause anything from uncomfortable symptoms to severe illness and even death.

Why don't all viruses cause human disease?

The exact reason why some viruses infect humans to cause disease and others do not remains a biological mystery. For example, humans usually die if infected by the rabies virus. But while human cells can be infected by circoviruses, they do not seem to cause disease. But circovirus infections in other mammals such as dogs and pigs can cause severe diseases.

If it is difficult for viruses to cause human disease, how are some able to do so?

There are a few major ways by which certain viruses can cause disease.

Viruses that encode information with RNA rather than DNA tend to have a higher rate of mutations. These mutations allow the viruses to be diverse in their genetic makeup, increasing the probability and pace by which they evade the human immune system.

In other cases, two different viruses interested in attacking the same host cell can swap regions of their nucleic acid and make a hybrid virus.

Some viruses vastly benefit from staying inside their hosts for an extended period of time without being deadly. The lengthier the infection, the longer the virus has to adapt and spread to other hosts.

Flu viruses can do both — mutate at a high rate and mix with other viruses.

Each year, scientists measure and predict which versions of the influenza virus, or strains, will be prevalent around the world during the next flu season. Then, they produce an influenza vaccine that works against the new strains. These new strains usually acquire changes in their nucleic acid that make the viruses work differently in the host organism, such as by changing the viral protein coat slightly. That is why scientists must tailor vaccines to specific strains of viruses.

How does genomics help us understand viruses?

Genomics is an interdisciplinary field that focuses on studying an organism's entire nucleic acid material (such as DNA or RNA), which is known as its genome. In 1977, researchers sequenced the first viral genome — phi X174, a virus that attacks bacteria.

But much progress has been made since then. For example, as of September 2021, there were 11,465 viral genome sequences available.

It is important to generate the complete genome sequence of viruses for several public health reasons. Knowing the viral sequence allows researchers to detect whether a virus is present in a host organism, and it provides clues for how a virus attacks and infects the host cell.

Viruses need to be able to use the functions of host cells to replicate themselves. Inhibiting some of the host cell's functions can potentially make viruses vulnerable. Researchers are studying genome sequences of both viruses and their hosts so as to target specific cell pathways that can be used for treatment.

How can we reduce the spread of viruses?

Masking, proper handwashing, use of hand sanitizers and social distancing reduce the spread of viruses of many viruses. Antiviral medications and vaccines can eliminate or reduce the severity of diseases caused by viruses.

Medicines used to treat bacterial infections do not kill viruses.

How do viral vaccines work?

Previously, viral vaccines contained weakened or dead viruses, with both forms being incapable of causing disease. Now, scientists have an additional tool in their toolkit, producing vaccines using a virus's genome sequence. The viral genome has the information needed to create viral proteins, the active component of the vaccine to which the immune system responds. When injected, these DNA or RNA molecules are used by the host to produce specific viral proteins, and the immune system then recognizes the viral proteins as foreign, sparking a response from multiple types of white blood cells. 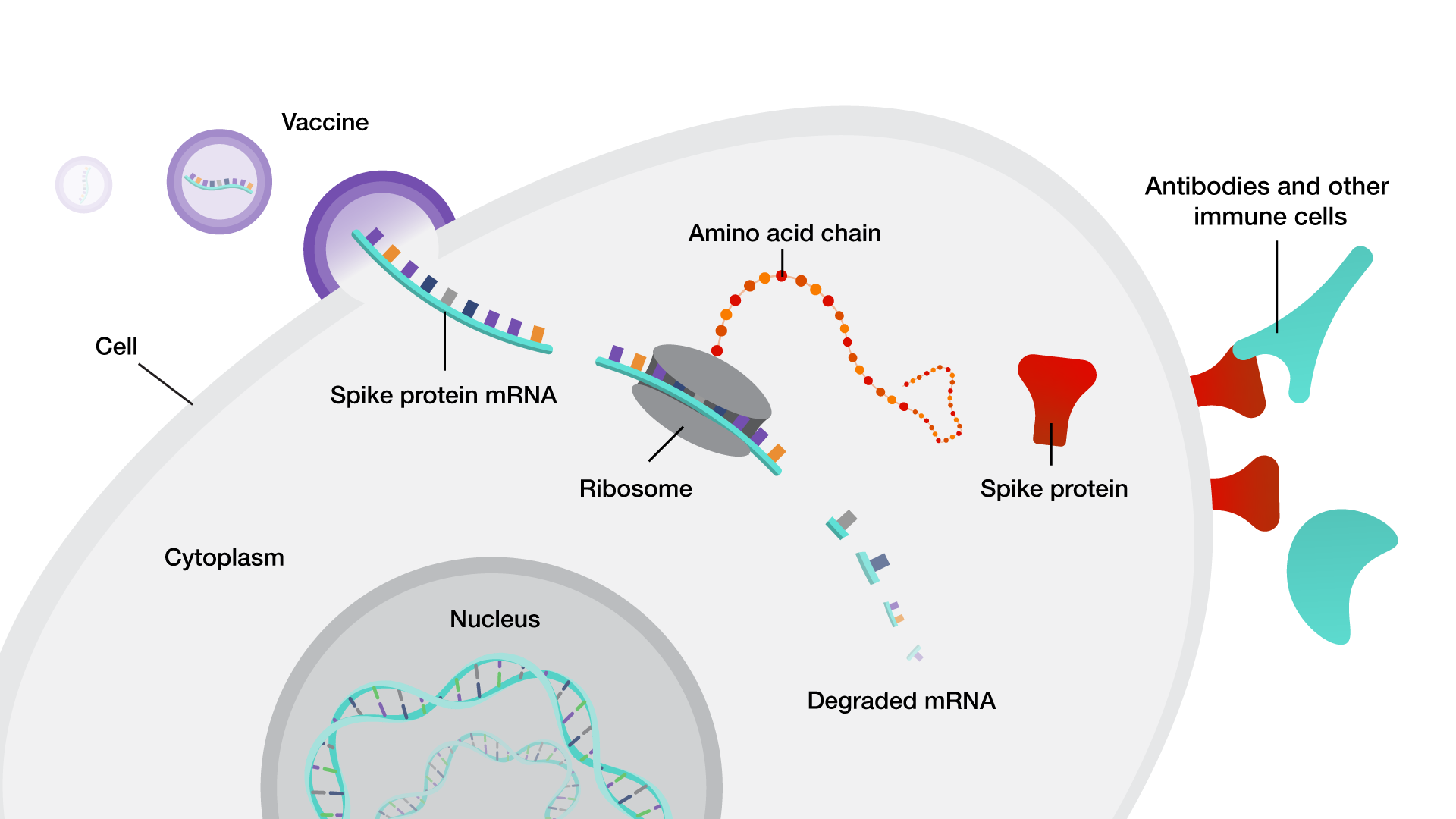 One such class of white blood cells, called B cells, produces a particular type of protein called an antibody. Antibodies bind to molecules on the surface of the virus and neutralize the virus to prevent it from replicating.

Once the human body successfully produces antibodies against a virus, its arsenal is ready for defense when the immune system comes in contact with the same virus in the future.

Why do some viruses affect certain people more negatively than others?

The exact reason why viruses affect people in different ways is under active study. Researchers attribute it to a combination of genetic and environmental factors. People with existing health conditions, such as diabetes, cardiovascular disease or cancer, are more vulnerable to a severe viral infection.

Does our body have viral DNA that doesn’t cause disease?

Yes. The human genome contains a considerable amount of DNA that previously existed in viruses. These viral sequences are remnants of past viral infections. Most of these sequences originally came from retroviruses, a type of virus that can insert one copy of its genome into the DNA of a host organism (such as a human). As the host cells make copies of its own genome, it copies the viral DNA as well. These sequences can pass from one generation to the next, becoming a permanent part of the human genome (like a fossil record).

At present, DNA from these retroviruses accounts for about 9% of the human genome, but most are thought to be incapable of producing new viral particles. 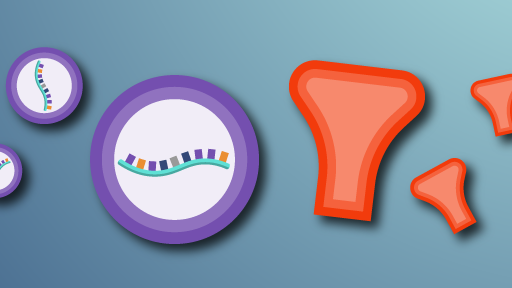 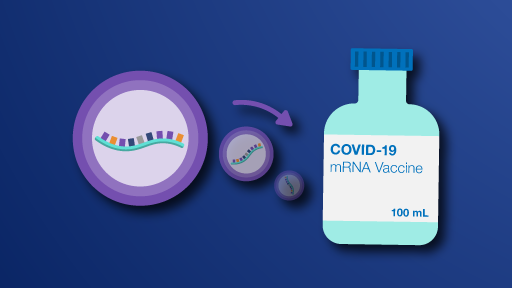 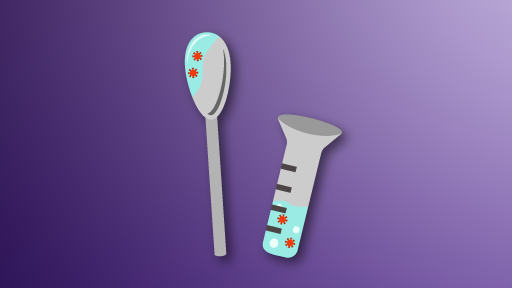