Ancient in dog years: NHGRI/Smithsonian to sequence what may be North America's oldest dog relics

Eleven thousand years ago, Paleo-Indians roamed the dry grasslands of Northeast Colorado, hunting the dwindling numbers of mammoths and the more plentiful bison herds. These hunters used spearheads and arrow tips - called Folsom points - that have been found at their kill sites.

In 1974 Dennis Stanford, Ph.D., archaeologist and director of the Paleo-Indian/Paleoecology Program at the Smithsonian Institution's National Museum of Natural History (NMNH), conducted a full-scale excavation of one of these sites, called the Jones-Miller Hell Gap Bison Kill Site in Yuma County, Colorado. They discovered bison remains and Folsom points, but the site also contained dog remains. The archeologists saved this trove of ancient effects, yet until only a few months ago, the dog bones remained untouched.

Then, in the spring of 2014, Dr. Stanford attended a talk about canine (dog) genomics by Elaine Ostrander, Ph.D., a senior investigator in NHGRI's Cancer Genetics and Comparative Genomics Branch. Dr. Ostrander spoke about her research on genes that influence the development of diseases in dogs and humans. Her lecture, The Dog Genome: Shedding Light on Human Disease, was part of a series of talks for the NHGRI-NMNH exhibition, Genome: Unlocking Life's Code. 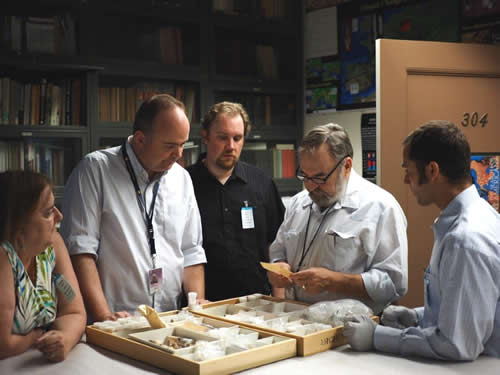 Dr. Stanford realized the potential importance of the NMNH collection of ancient dog bones to canine genome research, but, until recently, scientists didn't have the tools or the techniques needed to work with ancient DNA, or the complete sequence of the dog genome (published in 2005) to which they could compare ancient dog DNA.

Dr. Ostrander reached out to long-time collaborator, Robert Wayne, Ph.D., a professor in the Department of Ecology and Evolutionary Biology at the University of California, Los Angeles (UCLA), who heads a laboratory that specializes in ancient DNA. His lab has the sterile facilities necessary to conduct DNA extractions of fragile samples. Dr. Ostrander and her team will travel to UCLA at Dr. Wayne's invitation to isolate DNA from the dog bones in preparation for genome sequencing.

According to Dr. Ostrander, the bones are in excellent shape: the teeth are attached to the skull, a toenail is still intact, multiple sequential bones are present in the correct order and different levels of bone structure are visible. DNA from the 25 to 30 samples may reveal how dogs looked compared to present day breeds. Moreover, the DNA could provide clues about dogs' interaction with people at that time by placing early domesticated dogs in both time and context. 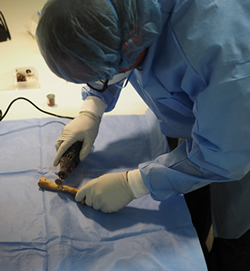 "If the remains are found to be 11,000 years old like the kill site, bones from one small dog will represent the oldest dog artifacts found in North America," said Dr. Ostrander.

In the next six months, the team should know if their attempts can produce a nuclear DNA sequence or, at least, a mitochondrial DNA sequence from the samples. Nuclear DNA is packaged into chromosomes within the nucleus and is inherited from both parents. Mitochondrial DNA is passed down through the mother and represents a fraction of the estimated 20,000 to 25,000 genes in the human genome.

Dr. Ostrander's research focuses on the study of genes important in growth regulation, and in particular their impact on diseases that affect canines and humans. Her research team searches the genome for genes that control the morphologic body plan of the domestic dog, whose breeds exhibit extraordinary variation. Much of their research focuses on the use of the canine genome to understand and identify genes of interest for both canine and human health.

"This high impact collaboration between NHGRI and the Smithsonian Institution represents a prime example of how collaborative research can look," said Vence Bonham, J.D., chief of NHGRI's Education and Community Involvement Branch in the Division of Policy, Communications, and Education.

According to Dr. Ostrander, she and her team are "waiting with great excitement" for what could be a newsworthy discovery. Future findings of this research may be published in a scholarly journal, she said.