National Institutes of Health (NIH) researchers have sequenced the whole genome of a dog that is native to the mountains of Sardinia, Italy, and discovered in it clues about the migration of humans to the area. (A genome is an organism's complete DNA sequence.) The findings, by scientists at the National Human Genome Research Institute (NHGRI), part of NIH, and their Italian collaborators, were reported August 12, 2016 in the journal, Genetics.

Called Fonni's Dogs, named for the city of Fonni, these fiercely protective creatures defend livestock and guard humans as they have for hundreds of years. By sequencing the whole genome of a Fonni's Dog and comparing it to genetic data from 27 other dog breeds, the researchers determined that it shares a genetic ancestry with dogs similar to the Saluki, once known as a Persian greyhound, and the Komondor, a hairy flock guardian from Hungary. 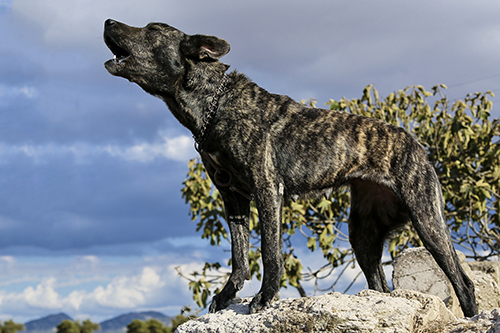 "The dog's genome acts as a sort of map, showing us that Fonni's Dog ancestors lived in the same areas from which Sardinians migrated," said Elaine Ostrander, Ph.D., chief of NHGRI's Cancer Genetics and Comparative Genomics Branch. "Understanding the geographical origins of the dogs and the humans gives us a new tool for understanding genetic causes of complex traits and rare disorders in both species."

But it's not only the countries of origin that will help researchers. Geographic isolation, affecting both people and dogs, results in less genetic diversity, making it a little easier for researchers to identify genes that contribute to health and disease.

Researchers have long recognized the benefit that isolated human groups can provide to genetic research. National Institute on Aging researchers, for example, have studied Sardinians to learn why so many live to age 100 and beyond. Researchers are just now exploring the use of dog breeds as isolated groups, adding it to a growing body of research about dogs. For years, Dr. Ostrander and other researchers have studied the domestic dog to learn about the genes that contribute to their physical characteristics, growth, development and health and then transferring that knowledge to humans.

Past research revealed that dogs are all the same species, Canis lupus familiaris, but they exist in separate, genetically isolated breed groups also known as pure breeds. Each breed has its own family history, and is formed under a unique set of selective pressures. Selective pressures are any natural or man-made forces that cause organisms to favor certain observable characteristics (phenotypes) that impart benefits for survival.

The question of whether the Fonni's Dog is a pure breed motivated breed enthusiasts in Sardinia to ask NHGRI researchers to sequence the dog's genome. They want to preserve the breed as a part of their local history and convince international breed registry organizations that the Fonni's Dog should be designated a pure breed. NHGRI researchers determined that the dog shows genetic homogeneity (genetic similarities within the breed) equal to other recognized Mediterranean dog breeds. The genetic signature shared by Fonni's Dogs sets it apart as a unique pure breed.

The researchers next will explore regions of the Fonni's Dog genome to identify genes or genetic locations that are important to the breed. These include genes affecting the breed's behavior, which is characterized as fundamentally hostile toward strangers, with natural tendencies toward territoriality and loyalty only to its owners.