As a growing number of medical centers and laboratories are sequencing patients' DNA, they continue to uncover millions of DNA differences in genes and the regions between the genes. But doctors have struggled to know which of these inherited differences - variants - really matter.

For the vast majority of the more than 80 million variants discovered to date, researchers know little about their roles in health and disease. Clinicians and researchers hope to use information about genomic variants to evaluate individual disease risk, make better diagnoses, develop more appropriate disease surveillance strategies, and provide better, tailored treatments for patients.

"Much of what we hope to accomplish in genomic medicine will be fundamentally flawed if we don't know what the genomic information means," said Heidi Rehm, Ph.D., Director of the Laboratory for Molecular Medicine at Partners Healthcare Personalized Medicine and associate professor of pathology at Brigham and Women's Hospital and Harvard Medical School, both in Boston.

While hundreds of labs across the country have developed their own evidence - and expertise - for when and how genes and variants impact disease, this has also led to conflicting interpretations among researchers, clinicians and genetic testing laboratories. "Large-scale sequencing of whole genomes today often means that as more and more labs have expanded beyond the genes they are expert in, we're seeing a growing number of lab results with uncertain findings about whether a gene or variant is disease-causing," said Jonathan Berg, M.D., Ph.D., assistant professor of genetics at the University of North Carolina at Chapel Hill.

In a special report appearing online May 27, 2015, in the New England Journal of Medicine, Drs. Rehm, Berg and other investigators with the National Institutes of Health's Clinical Genome Resource (ClinGen) describe how the program is evaluating the clinical relevance of genomic variants for use in precision medicine and research. ClinGen, launched in 2013, is funded by the National Human Genome Research Institute (NHGRI), with co-funding from the Eunice Kennedy Shriver National Institute of Child Health and Human Development and the National Cancer Institute, all part of NIH.

"ClinGen is both setting standards and applying those standards to the evaluation of genetic information as it might currently apply in the context of clinical care," Dr. Rehm said. She leads a group of ClinGen-funded researchers that is helping laboratories share their data in standardized ways and compare how they have classified variants to ensure consistency in approaches. Expert working groups have been organized to apply these standards in the context of particular diseases.

ClinGen projects center on developing processes and procedures to answer three basic questions: Is there a true relationship between a gene and disease? Does the genetic variant in a gene cause or contribute to disease? For a person who has one of these genetic variants, are there specific therapeutic or monitoring approaches available for them?

For some genes, such as BRCA1 and BRCA2, scientists have strong evidence that mutations dramatically raise the risk for breast and ovarian cancer. Yet for many genes and variants, the evidence is less compelling.

"Even if we know the gene is relevant to a disease, how do we tell the variants that are disease-causing from those that are benign within that gene?" Dr. Rehm said. "That's critical to determine if a variant is causative for a patient's condition, could cause a disease in the future or could determine a treatment or drug response. Any conclusions are dependent on how we interpret that variant. Of the millions of variants we know of, how do we know which genes and variants are most relevant to health?"

"ClinGen aims to become a critical resource to facilitate the routine implementation of precision medicine in the clinic," said Erin Ramos, Ph.D., ClinGen program director in the NHGRI division of genomic medicine. "We need a central resource which everyone can freely access. By sharing those data, we can build our knowledge base, and use it to improve care. It's critical for the clinician, for the labs interpreting genomic testing results, and for the research community.

Sharing data and making them accessible are at the heart of ClinVar, a database of variants and their clinical interpretations, and a key component of ClinGen. ClinVar is supported by the National Center for Biotechnology Information of the National Library of Medicine. While labs and institutions have built hundreds of databases for the variants they have accumulated, ClinGen and ClinVar seek to combine them into one common central database. In the last two years, nearly 300 clinical and research laboratories have submitted variants to ClinVar. In fact, ClinVar currently contains more than 170,000 variant submissions from laboratories and research groups around the world. ClinGen has also created GenomeConnect, a patient registry to enable patients who have had or are considering having genomic testing to share their results.

The ClinGen expert working groups interpret the strength of gene-disease relationships, resolve differences in the interpretation of variants' clinical significance found in ClinVar, and move variants into the category of "expert panel reviewed" so they can be used in clinical decision-making. The American College of Medical Genetics and Genomics has recently released guidelines to report on variants and the type of data laboratories should use to classify them. ClinGen is working with laboratories to help facilitate the use of these standards.

Dr. Berg, a clinical geneticist, sees ClinGen as eventually filling an unmet need in the clinic.

"From a clinical implementation view, we've developed a framework to evaluate the evidence of an association between a gene and a particular disease," he said. "We want to make that process transparent - we want to see information that says this gene was implicated in Huntington's, or a variant is implicated in seizures - that gives people a sense of how they should be applied. That could guide treatment and diagnostic choices."

To New England Journal co-author and clinical geneticist Sharon Plon, M.D., Ph.D., ClinGen is built for cancer genomics. Dr. Plon, professor of pediatrics/hematology-oncology and molecular and human genetics at Baylor College of Medicine in Houston, echoes the need for standards in interpreting genome sequencing results, particularly for cancer clinicians. "The inconsistency of reporting among laboratories is a concern," she said. "Two labs might evaluate the same variant, and one labels it pathogenic and the other calls it of uncertain pathogenicity. There needs to be more standardized use of terminology and resources where a physician or lab trying to identify a variant can go and see what the expert opinion and accumulated information is about that variant."

For now, ClinGen is focusing on genes and variants underlying certain forms of cancer, cardiovascular disease and metabolic disorders where the variants are likely to have a more direct impact. In cancer, for example, a team is looking at commonly mutated genes and applying the framework to available data and examining the results. ClinGen would ultimately like to develop an "integrated record describing the clinical relevance of every genetic variant and how it impacts disease," said Dr. Ramos.

Getting to that point is still years away. "When it happens," she said, "everyone - researchers, labs, clinicians and patients - can speak the same language." 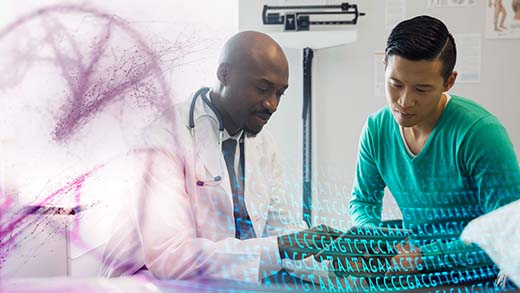