Six new grants from the National Institutes of Health (NIH) will support researchers to develop new computational approaches for searching among millions of genomic variants to find those that make a difference in disease susceptibility or in other traits. The awards are for three years each and total approximately $13 million, pending the availability of funds. They are administered by the National Human Genome Research Institute (NHGRI) and the National Cancer Institute, both parts of NIH.

Comparing the genomes of many people suggests that there are tens of millions of genetic variants, or DNA spelling differences. For the last decade, scientists have used genome-wide association studies (GWAS) to find regions of the genome associated with diseases and traits. In GWAS, the genomes of thousands of people with and without a disease are compared to find the genomic regions containing variants that affect disease risk. Although GWAS may find hundreds of variants that appear to be associated with a disease, it remains a challenge to find out which variants actually have a role in the disease process, and what that role might be.

"Before we can understand how a variant or gene functionally contributes to a disease - and then develop prevention and therapeutic strategies - we have to identify which genes and variants actually are involved in raising the risk," said Lisa Brooks, Ph.D., program director of the NHGRI Genetic Variation Program. "We are looking for approaches that can find the causal variants out of the many variants associated with a disease, or at least narrow down the set." 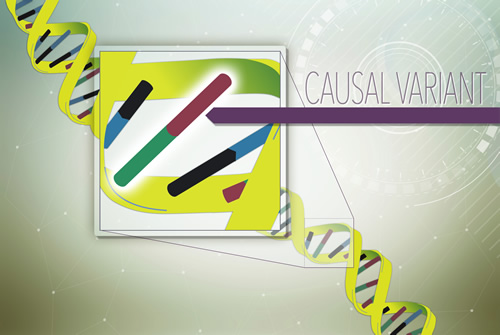 Most variants, including many that contribute to disease risk, response to drugs, and traits such as height, are in genomic regions that do not code for proteins. These variants usually affect the regulation of genes, residing within "switches" in the genome that determine when and where proteins are made.

"We know a great deal about the protein-coding genes and what they do," said Mike Pazin, Ph.D., program director in the NHGRI Functional Genomics Program. "For variants sitting outside the coding regions, it is difficult to know which parts of the genome they affect, let alone how the variants cause differences in function. However, we know that 90 percent of associated variants found in GWAS are outside of the protein-coding areas. Eventually, we want to understand mechanistically how the variants function in regulating genes, and how differences in the way they function affect disease risk."

The researchers are developing computational approaches to combine many different sets of data to identify disease-causing variants or narrow down the set of candidate variants. They will use data from experiments to determine the accuracy of the computational predictions.

The following grants have been awarded (pending availability of funds):