American Society of Human Genetics (ASHG) members have selected Leslie G. Biesecker, M.D., a clinical and molecular geneticist and long-time investigator with the National Human Genome Research Institute (NHGRI), as their new president-elect. In 2019, Dr. Biesecker will become president of ASHG, a professional membership organization for human genetics specialists worldwide. He will serve in his personal capacity.

As the senior investigator and chief of NHGRI's Medical Genomics and Metabolic Genetics Branch, Dr. Biesecker leads a program focused on understanding the relationship of genomic variation to health and disease. In the past 20 years, he has studied rare disorders of development and overgrowth such as Pallister-Hall syndrome, McKusick-Kaufman syndrome and Proteus syndrome. He initiated ClinSeq®, a large-scale medical sequencing project aimed at understanding the contributions of rare variants to common disease.

Dr. Biesecker was also a co-chair of the American College of Medical Genetics and Genomics Subcommittee on Incidental Findings. In that capacity, he coauthored ACMG's guidelines on incidental (or secondary) findings that are unrelated to the health issue that prompted the genomic sequencing but have medical consequences for the patient. These recommendations have changed the practice of genomic medicine. 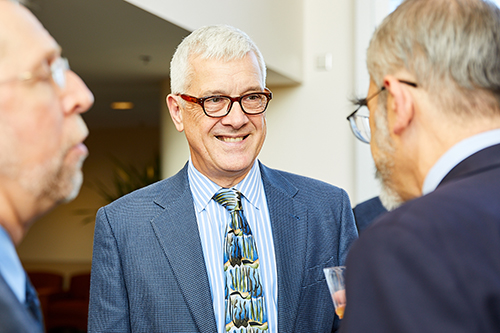 Dr. Biesecker joined NHGRI as a tenure-track investigator in 1993 and secured tenure as a senior investigator in 2001. Since 2002, he has directed NHGRI's Physician-Scientist Development Program and taught at the Johns Hopkins University Bloomberg School of Public Health. Before joining NHGRI, he served as the staff pediatrician at the People's Clinic and St. Louis Children's Hospital from 1986-1988.

Dr. Biesecker was elected to the National Academy of Medicine of the National Academy of Sciences in 2016. Among his many awards is the March of Dimes Pruzansky Award in 2014 for his research on rare diseases. He has received several NIH Director's awards, including one for developing the DNA testing brochure for the World Trade Center victim families in 2002, and for the HeLa Whole Genome Data Support Group in 2014.