Using Genomics in the Clinic

Moving beyond this impasse and proving the usefulness of genomic medicine were among the thorny topics tackled June 8-9 at the Genome Medicine VIII meeting in Rockville, Maryland. International experts discussed the gaps, challenges and opportunities in genomics at Genomic Medicine Meeting VIII: NHGRI's Genomic Medicine Portfolio, sponsored by the National Human Genome Research Institute (NHGRI), part of the National Institutes of Health (NIH). In a series of nine panels, speakers addressed topics of broad interest across NHGRI programs, including interpreting genomic variants, handling genomic data, and diversity in research populations, to name a few.

"We're in an exciting time for genomics and genomic medicine," said Teri Manolio, M.D., Ph.D., meeting organizer and director of the NHGRI Division of Genomic Medicine. "We increasingly are able to turn the science into useful information for both research and medical care." 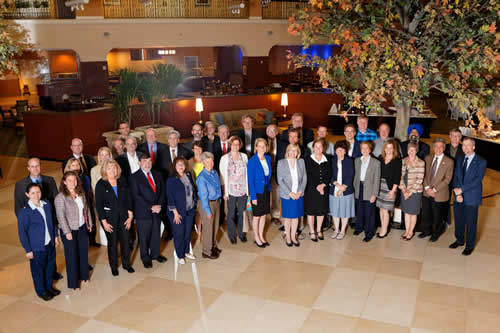 Geoffrey Ginsburg, M.D., Ph.D., director of the Center for Applied Genomics and Precision Medicine at Duke University in Durham, North Carolina, led a panel that addressed gaps in the evidence supporting the use of genomic medicine. "We need to organize data across NHGRI programs into a consortium that allows us to pool information and evidence," he said, noting the many types of evidence that can be collected, including clinical, behavioral, molecular, emotional and financial. NHGRI programs such as the Clinical Sequencing Exploratory Research Network (CSER), the Implementing Genomics in Practice (IGNITE) Network, and others, continue to generate data on the use of genomic medicine in patient care, he said.

Barriers to the implementation of genomic medicine include a lack of physician education and experience with technology, such as genomic testing and its integration into electronic health records, fragmented health care delivery systems and insurance reimbursement, he said. He wondered if NHGRI should create partnerships across NIH to address some of these issues. "How do we define and agree on details for pilot programs to test the best ways to implement genomic medicine?" he asked. "How do we incentivize programs to implement and embrace genomic medicine?"

Understanding the role of DNA variants - inherited DNA differences in genes and the regions between the genes - in disease may go a long way in supporting the use of genomic medicine. Information about genomic variants could help doctors evaluate individual disease risk, make better diagnoses and provide tailored treatments for patients.

A growing number of medical centers and labs in the United States are sequencing patients' DNA and developing their own evidence and interpretations of how variants might affect disease. Since different labs use different reference databases and interpretation rules, this sometimes leaves doctors with conflicting information about which variants really matter. Another meeting panel tackled this difficulty in obtaining consistent interpretations of gene variants. Heidi Rehm, Ph.D., associate professor of pathology at Brigham and Women's Hospital in Boston, pointed to the increasingly important part that NHGRI and the National Institutes of Health's Clinical Genome Resource (ClinGen) play in attempting to bring new standards to academic centers and labs for interpreting the roles of variants in disease.

"It's a challenge when you have all sorts of quality levels of information, and most database submissions come from single labs with their own interpretations of what a variant means," Dr. Rehm said, calling for a more transparent system.

The group said that labs and medical centers need to share their evidence of the potential roles of genomic variants in disease in order for researchers and clinicians to develop a consensus.

Co-panel leader Dan Roden, M.D., Assistant Vice Chancellor for Personalized Medicine at Vanderbilt University School of Medicine in Nashville, agreed. He pointed to the need for rules and guidelines to assess whether variants contribute to disease, more training and education for healthcare providers in gauging variants and more research in labs to foster the discovery of genomic variants.

The panel suggested involving basic scientists in the variant discovery process so they can "learn what challenging clinical questions are being faced."

A major challenge confronting genomic medicine centers is how to handle the overwhelming amounts of data. The NHGRI Electronic Medical Records and Genomics (eMERGE) Network, for example, combines genomic analyses of large biorepositories of tissue samples with electronic medical records to find the best ways to tailor medical care to individual patients based on their genetic differences.

At the same time, genomic data are rapidly evolving. Howard Jacob, Ph.D., director of the Human and Molecular Genetics Center at the Medical College of Wisconsin in Milwaukee, led a panel that examined the challenges in dealing with "the dynamic nature of genomic medicine data." Those challenges include the increasing use of whole genome sequence data (where a person's entire complement of DNA is sequenced); constantly evolving interpretations of variants and genes and their disease associations; and, alternately, an often limited understanding of the connection between genetic make-up and disease.

Dr. Jacob said there are new and emerging definitions of what makes a genomic variant "actionable," that is, when there is a medical therapy that can be applied. "Actionable" might mean something different to clinical geneticists, patients and insurance companies, he said. Increasing use of genomic evidence - including using genomics to help predict how a patient will respond to a drug, or pharmacogenomics - will bring about changes to diagnoses, prognoses and treatments.

Other panel discussions explored the complexities of diversity in research populations and the challenges to actually using genomics in medicine.

Carol Bult, Ph.D., Deputy Director of The Jackson Laboratory Cancer Center in Bar Harbor, Maine, advocated for more diversity in research participants, including ethnic and minority populations. According to Dr. Bult, diversity improves the understanding of human genetic variation and informs the development of drugs and treatments for specific groups. Yet, obstacles still stand in the way, including physician attitudes about race and health, lack of minority investigators, language difficulties and a lack of public awareness of clinical trials, she said.

In a session focused on how to implement genomic medicine, Howard McLeod, Pharm.D., the medical director at the DeBartolo Family Personalized Medicine Institute at the Moffitt Cancer Center in Tampa, noted a number of challenges, ranging from the quantity and complexity of data generated, and interpreting and applying the results from genomic testing to insurance and health care coverage and physician education and attitudes. One barrier - and opportunity - is how best to analyze and use data in electronic health records, he said.

In the end, the challenges and opportunities of genomic medicine are changing the very culture of medicine.

"Genomics has so much potential to improve the way medicine is delivered," said Stephen Kingsmore, M.B., Ch.B., executive director of the Center for Pediatric Genomic Medicine at Children's Mercy Hospital in Kansas City. "It can be an ongoing and difficult challenge at times to convince physicians to recreate traditional medicine as genomic medicine."