National Human Genome Research Institute (NHGRI) researchers have identified new genes associated with the Erdheim-Chester disease (ECD) and some possible new therapies. Findings on this ultra-rare disease, found in approximately 600 people in the world, were published in Blood Advances.

"The discovery of new genes associated with ECD provides hope for improving the diagnoses of a disease that affects so many parts of the body. We also hope it will help us identify new treatments," said Juvianee I. Estrada-Veras, M.D., clinical investigator and staff clinician in NHGRI's Medical Biochemical Genetics Residency Program. "Our work on ECD builds on the institute's goals to advance medical knowledge about rare diseases and to potentially provide insights into more common disorders."

ECD is caused by the accumulation of specialized white blood cells called histiocytes in different organs. The resulting inflammation damages organs and tissues throughout the body, causing them to become thickened, dense and scarred. Histiocytes normally function to destroy foreign substances and protect the body from infection. ECD has no standard therapy, although consensus guidelines for clinical management were published in 2014. 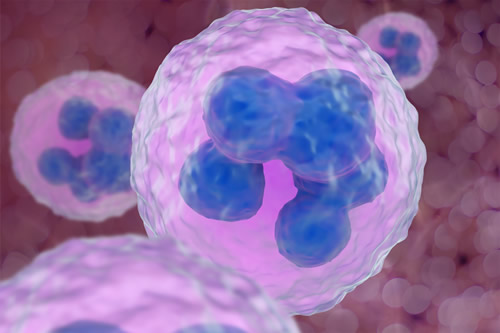 Between 2011 and 2015, researchers examined 60 adults with ECD at the NIH Clinical Center. Of 59 samples that were available for molecular testing, half had BRAF V600E gene mutations, which is sometimes seen in colon cancer, lung cancer, thyroid cancer, brain tumors and some blood cancers. Other patients had mutations in genes of the MAPK pathway, which controls cell growth and proliferation. These findings indicate that, despite the presence of inflammation and the absence of metastases (spread of cancer cells from the place where they first formed to another part of the body), ECD should be considered a type of cancer and treated by oncologists, researchers wrote.

Until now, the most common treatment for ECD has been interferon, a drug that interferes with the division of cancer cells and slows tumor growth. Some patients with severe forms of disease can succumb to the illness even with treatment. The mortality rate for ECD has been estimated at 60 percent at 3 years from the time of diagnosis.

Researchers suggested that therapies that stop the growth and proliferation of cells by blocking the MAPK pathway -- vemurafenib, dabrafenib and trametinib -- may provide new hope for treating and improving the survival of people with ECD. A therapeutic trial of dabrafenib and trametinib is now enrolling new ECD patients with BRAF V600E mutations (www.clinicaltrials.gov #NCT02281760).