The National Human Genome Research Institute (NHGRI) and other institutes at the National Institutes of Health recently participated in a high-energy science communications contest called the Three-Minute Talk (TmT). NHGRI's Ryan Johnson came away with a first place win after the finals on June 29, 2017.

Three other postdoctoral intramural trainees from NHGRI - Ralu Nicoli, Cihan Oguz and Anthony Kirilusha -participated in the finals, taking on the challenge of using plain language principles and one PowerPoint slide to explain their research in three-minutes or less. They competed against nine other trainees (grad students and postdocs) from two other institutes: the National Institute of Child Health and Human Developmemt (NICHD) and the National Institute of Dental and Craniofacial Research (NIDCR).

The second and third place winners came from NIDCR and NICHD, respectively.

Antibiotic resistance in bacteria is a major problem. But before we can begin to address this issue, we must first have a thorough understanding of how bacteria develop resistance. One mechanism is through the acquisition of an antibiotic resistance gene. For example, the KPC gene normally confers resistance to carbapenem antibiotics. Interestingly, we find that numerous KPC-positive bacteria that are sensitive to carbapenems. Our plan is to utilize whole genome sequence to identify genetic markers that may be influencing this unique resistant phenotype which could potentially be utilized as a screening tool to catch bacteria at "high-risk" for becoming carbapenem resistant.

Just like in a house, cells should recycle cellular waste. For this task, they rely on this spherical organelle called the lysosome, which works like the rubbish can of the cell. To visualize lysosomes in human fibroblasts, we stained with an antibody against the lysosomal membrane, LAMP3 shown in green. Containing acid and several types of digestive enzymes, the lysosomes digest unwanted cellular waste. An inability to make one of these enzymes or a problem in lysosomal formation can lead to rare, disorders called a lysosomal disease. Chediak-Higashi disease (or CHD) is one example of a rare lysosomal disorder, caused by mutations in lysosomal regulator gene (LYST). CHD is characterized by partial albinism, prolonged bleeding times, recurrent, life-threatening infections, and late neurological involvement.

Resistant hypertension, or persistently high blood pressure despite concurrent use of three or more antihypertensives, is a medical condition that substantially increases the risk for heart attack, congestive heart failure, chronic kidney disease, and stroke. African-Americans are disproportionately affected by resistant hypertension and are more prone to its earlier onset compared to other ethnicities in the U.S. Aiming to identify a key driver gene for treating resistant hypertension, I built a predictive model and a gene-gene interaction network using genomic data gathered from several African American patients with and without this disease.

Although not allowed to actually compete in the TmT competition, which is only open to post-doctoral intramural trainees, these up-and-coming post bacalaureates - Madeline Arnold and Corinne Conn, had three-minute talks recorded of their research after they presented at a recent trainee retreat.

This study investigates psychological resilience and its relationship to health in an adult sickle cell population. The Brief Resilience Scale (BRS) is used to capture psychological resilience, which defines resilience as an "individual's ability to bounce back from stress", and has been validated as an accurate indicator of that capacity. Data on the participants include information on their demographics, their psycho-social and environmental well-being, clinical data, and their clinical laboratory tests. Within this SCD population, using the BRS provides an opportunity of understanding an individual's current capacity for resilience while living with a chronic disease and its relationship to multiple domains of life (physical, mental, environmental, social, physiological). 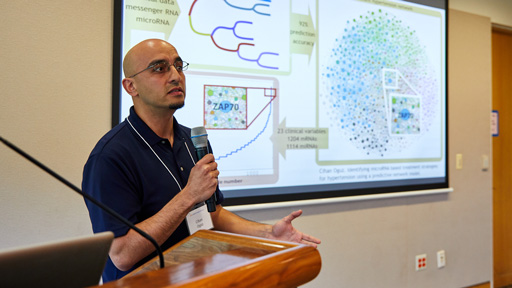