In a new study of families affected by Attention Deficit Hyperactivity Disorder (ADHD), National Institutes of Health (NIH) researchers have identified different connections in the brain that children may inherit from their parents and are linked to the disorder.

One of the most common childhood neuropsychiatric disorders, ADHD is highly heritable - meaning that genes play a role in its development - but little is known about the specific genes involved.

More knowledge about these brain connections can help researchers discover and understand the genes associated with ADHD and, in the long run, lead to improved treatments, according to Philip Shaw, B.M.B.Ch., Ph.D., senior author and an investigator in the Social and Behavioral Research Branch at the National Human Genome Research Institute, part of NIH.

Here, Dr. Shaw shares insights from the new study that was published November 16 in JAMA Psychiatry. 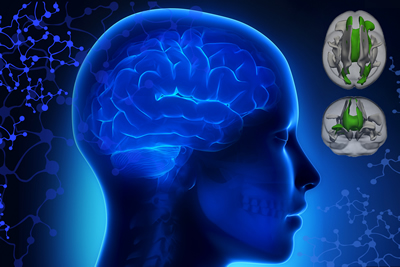 What is ADHD and how many people are affected by it?

Dr. Shaw: ADHD is a relatively common condition marked by inattention, hyperactivity and impulsive behavior. These symptoms are not trivial and can cause major problems at home, at work and with peers. Around one in 15 children and one in 40 adults are currently diagnosed with ADHD. We approach this common problem by looking at the brain, as we know that ADHD is partly caused by some subtle brain changes that we can safely detect using brain imaging.

What role do genes play in ADHD?

Dr. Shaw: In the simplest terms, certain genes provide the blueprint for building the brain; the brain produces the symptoms of ADHD. We know surprisingly little about the exact genes involved. There does not seem to be a single gene that causes ADHD. Rather, it seems that many genes act together to slightly increase a person's chance of developing ADHD.

What were you trying to do in this study?

Dr. Shaw: Using advanced, safe imaging technologies, we looked at the brains of 350 individuals in families affected by ADHD. We wanted to identify the connections in the brain that are most likely to be helpful in future genomics studies. So, we looked at a vast number of brain connections and ranked them according to which were most likely to be inherited and play a role in ADHD. We're now asking which genes might be linked with these "top" brain connections.

What kind of brain connections did you look at?

Dr. Shaw: We looked at two types of brain connections: Structural connections made up of white matter tracts that join different brain regions, and functional connections, the coordinated patterns of brain activity that "fire" together when we think, see, act or feel.

What parts of the brain's structural and functional connections are both heritable and associated with ADHD?

What are the next steps?

Dr. Shaw: We've identified the structural and functional connections in the brain that are highly heritable and associated with ADHD symptoms. We can now ask how genetic variation influences these connections that are so important in the disorder. Eventually, this work might help us identify new targets for treatment. Such novel treatments could help improve the lives of people living with ADHD by reducing or eliminating symptoms.