Investigators with the National Institutes of Health (NIH) have discovered the genomic switches of a blood cell are key to regulating the human immune system. The findings, published in Nature today, open the door to new research and development in drugs and personalized medicine to help those with autoimmune disorders such as inflammatory bowel disease or rheumatoid arthritis.

The senior author of the paper, John J. O'Shea, M.D., is the scientific director at NIH's National Institute of Arthritis and Musculoskeletal and Skin Diseases (NIAMS). The lead author, Golnaz Vahedi, Ph.D., is a postdoctoral fellow in Dr. O'Shea's lab in the Molecular Immunology and Inflammation Branch. The study was performed in collaboration with investigators led by NIH Director, Francis S. Collins, M.D., Ph.D., in the Medical Genomics and Metabolic Genetics Branch at the National Human Genome Research Institute (NHGRI).

Autoimmune diseases occur when the immune system mistakenly attacks its own cells, causing inflammation. Different tissues are affected in different diseases, for example, the joints become swollen and inflamed in rheumatoid arthritis, and the brain and spinal cord are damaged in multiple sclerosis. The causes of these diseases are not well understood, but scientists believe that they have a genetic component because they often run in families. 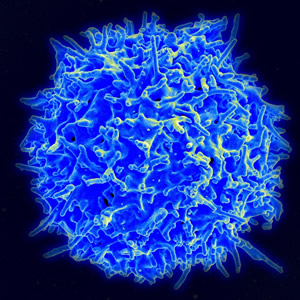 "We now know more about the genetics of autoimmune diseases," said NIAMS Director Stephen I. Katz, M.D., Ph.D. "Knowledge of the genetic risk factors helps us assess a person's susceptibility to disease. With further research on the associated biological mechanisms, it could eventually enable physicians to tailor treatments to each individual."

Identifying autoimmune disease susceptibility genes can be a challenge because in most cases a complex mix of genetic and environmental factors is involved. Genetic studies have shown that people with autoimmune diseases possess unique genetic variants, but most of the alterations are found in regions of the DNA that do not carry genes. Scientists have suspected that the variants are in DNA elements called enhancers, which act like switches to control gene activities.

Dr. O'Shea's team wondered if the alterations might lie in a newly discovered type of enhancer called a super-enhancer (SE). Earlier work in the laboratory of Dr. Collins and others had shown that SEs are especially powerful switches, and that they control genes important for the function and identity of each individual cell type. In addition, a large number of disease-associated genetic alterations were found to fall within SEs, suggesting that disease occurs when these switches malfunction.

Dr. O'Shea's team began by searching for SEs in T cells, immune cells known to play an important role in rheumatoid arthritis. They reasoned that SEs could serve as signposts to steer them toward potential genetic risk factors for the disease.

"Rather than starting off by looking at genes that we already knew were important in T cells, we took an unbiased approach," said Dr. O'Shea. "From the locations of their super-enhancers, T cells are telling us where in the genome these cells invest their assets-their key proteins-and thereby where we are most likely to find genetic alterations that confer disease susceptibility."

Using genomic techniques, the researchers combed the T cell genome for regions that are particularly accessible to proteins, a hallmark of DNA segments that carry SEs. They identified several hundred, and further analysis showed that they largely control the activities of genes that encode cytokine and cytokine receptors. These types of molecules are important for T cell function because they enable them to communicate with other cells and to mount an immune response.

But the researchers' most striking observation was that a large fraction of previously identified alterations associated with rheumatoid arthritis and other autoimmune diseases localized to these T cell SEs. Additional experiments provided further evidence for a central role for SEs in rheumatoid arthritis. When the scientists exposed human T cells to a drug used to treat the disease, tofacitinib, the activities of genes controlled by SEs were profoundly affected compared to other genes without SEs. This result suggests that tofacitinib may bring about its therapeutic effects in part by acting on SEs to alter the activities of important T cell genes.

"Three types of data-the genetics of rheumatoid arthritis, a genomic feature of T cells, and the pharmacological effects of a rheumatoid arthritis drug-are all pointing to the importance of super-enhancers," said Dr. Vahedi. "These regions are where we plan to search for insights into the mechanisms that underlie rheumatoid arthritis and other autoimmune diseases, and for novel therapeutic targets for these conditions."

The mission of the NIAMS, a part of the U.S. Department of Health and Human Services' National Institutes of Health, is to support research into the causes, treatment and prevention of arthritis and musculoskeletal and skin diseases; the training of basic and clinical scientists to carry out this research; and the dissemination of information on research progress in these diseases. For more information about the NIAMS, call the information clearinghouse at (301) 495-4484 or (877) 22-NIAMS (free call) or visit the NIAMS website at http://www.niams.nih.gov.