Scientists studying the genomes of nearly 5,000 people have pinpointed a genetic variant tied to an increased risk for stroke, and have also uncovered new details about an important metabolic pathway that plays a major role in several common diseases. Together, their findings may provide new clues to underlying genetic and biochemical influences in the development of stroke and cardiovascular disease, and may also help lead to new treatment strategies.

"Our findings have the potential to identify new targets in the prevention and treatment of stroke, cardiovascular disease and many other common diseases," said Stephen R. Williams, Ph.D., a postdoctoral fellow at the University of Virginia Cardiovascular Research Center and the University of Virginia Center for Public Health Genomics, Charlottesville.

Stroke is the fourth leading cause of death and a major cause of adult disability in this country, yet its underlying genetics have been difficult to understand. Numerous genetic and environmental factors can contribute to a person having a stroke. "Our goals were to break down the risk factors for stroke," Dr. Williams said.

The researchers focused on one particular biochemical pathway called the folate one-carbon metabolism (FOCM) pathway. They knew that abnormally high blood levels of the amino acid homocysteine are associated with an increased risk of common diseases such as stroke, cardiovascular disease and dementia. Homocysteine is a breakdown product of methionine, which is part of the FOCM pathway. The same pathway can affect many important cellular processes, including the methylation of proteins, DNA and RNA. DNA methylation is a mechanism that cells use to control which genes are turned on and off, and when.

But clinical trials of homocysteine-lowering therapies have not prevented disease, and the genetics underlying high homocysteine levels - and methionine metabolism gone awry - are not well defined.

Dr. Williams and his colleagues conducted genome-wide association studies of participants from two large long-term projects: the Vitamin Intervention for Stroke Prevention (VISP), a trial looking at ways to prevent a second ischemic stroke, and the Framingham Heart Study (FHS), which has followed the cardiovascular health and disease in a general population for decades. They also measured methionine metabolism - the ability to convert methionine to homocysteine - in both groups. In all, they studied 2,100 VISP participants and 2,710 FHS subjects.

Investigators identified variants in five genes in the FOCM pathway that were associated with differences in a person's ability to convert methionine to homocysteine. They found that among the five genes, one - the ALDH1L1 gene - was also strongly associated with stroke in the Framingham study. When the gene is not working properly, it has been associated with a breakdown in a normal cellular process called programmed cell death, and cancer cell survival.

They also made important discoveries about the methionine-homocysteine process. "GNMT produces a protein that converts methionine to homocysteine. Of the five genes that we identified, it was the one most significantly associated with this process," Dr. Williams said. "The analyses suggest that differences in GNMT are the major drivers behind the differences in methionine metabolism in humans."

"It's striking that the genes are in the same pathway, so we know that the genomic variants affecting that pathway contribute to the variability in disease and risk that we're seeing," he said. "We may have found how genetic information controls the regulation of GNMT."

The group determined that the five genes accounted for 6 percent of the difference in individuals' ability to process methionine into homocysteine among those in the VISP trial. The genes also accounted for 13 percent of the difference in those participants in the FHS, a remarkable result given the complex nature of methionine metabolism and its impact on cerebrovascular risk. In many complex diseases, genomic variants often account for less than 5 percent of such differences.

"This is a great example of the kinds of successful research efforts coming out of the GARNET program," said program director Ebony Madden, Ph.D. "GARNET scientists aim to identify variants that affect treatment response by doing association studies in randomized trials. These results show that variants in genes are associated with the differences in homocysteine levels in individuals."

The association of the ALDH1L1 gene variant with stroke is just one example of how the findings may potentially lead to new prevention efforts, and help develop new targets for treating stroke and heart disease, Dr. Williams said.

"As genome sequencing becomes more widespread, clinicians may be able to determine if a person's risk for abnormally high levels of homocysteine is elevated," he said. "Changes could be made to an individual's diet because of a greater risk for stroke and cardiovascular disease."

The investigators plan to study the other four genes in the pathway to try to better understand their potential roles in stroke and cardiovascular disease risk.

The National Human Genome Research Institute is one of the 27 institutes and centers at the National Institutes of Health. The NHGRI Extramural Research Program supports grants for research and training and career development at sites nationwide. Additional information about NHGRI can be found at www.genome.gov. 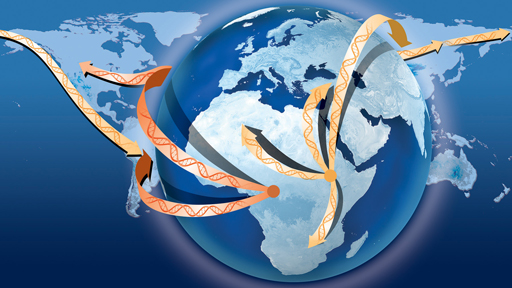