Americans love all-you-can-eat buffets - but how do they choose what to eat? Using a virtual reality (VR) buffet, researchers studied the hundreds of small decisions mothers make while selecting food for their children. By detecting patterns in the mothers' food choices, the researchers determined why receiving information about their children's genomic risk of obesity led some mothers to make healthier choices. The findings, by National Human Genome Research Institute (NHGRI) researchers, were published January 23, 2018, in the Annals of Behavioral Medicine.

"In this study, we found that individuals who received the strongest messages about their children's genomic risk for obesity were less subject to a type of nonconscious behavior called 'choice inertia,' or selecting the same type of food over and over again. This translated into smaller portion sizes," said Susan Persky, Ph.D., senior author and associate investigator with NHGRI's Social and Behavioral Research Branch (SBRB). She also heads NHGRI's Immersive Virtual Environment Test Unit.

Obesity has long been recognized as a major health problem in the United States. Nearly 69 percent of adults are considered overweight or obese, and more than 6 percent have extreme obesity. A child with overweight parents has an increased risk of growing into an obese adult. Inheritance clearly plays a role in obesity, but the precise genetic mechanisms aren't understood, and the genetic risk factors are complex. Dr. Persky and her collaborators are exploring the impact of genomic information on decision-making and behavior, and seeking the most effective ways to deliver genomic information. 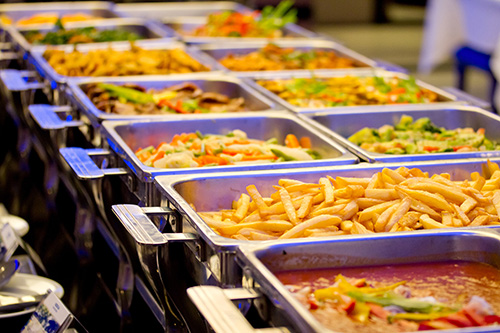 In the study, 221 overweight or obese mothers entered a virtual reality room with a food buffet. They could pick both the types and quantities of food for their children. Before they began, however, the women were randomly assigned to three groups. The first group received information about food safety when feeding children. The second group received information about risks associated with obesity, including the role of lifestyle in the development of obesity and tips on developing healthy lifestyle habits. The third group received childhood obesity risk information, plus a personalized family history-based risk estimate for their child. Participants then made food choices for their child by moving around the virtual buffet and making food selections by moving a handheld pointer.

They discovered that the mothers made many "micro-decisions" while selecting foods for their children. Using data from the VR helmet, the researchers tracked the order in which mothers chose certain foods and, given that food choice, how likely she was to choose or not choose a particular food next.

They also learned that mothers who received behavioral and family health history information served an average of 45 fewer calories than those who had received food safety information.

The researchers analyzed the order of food selection using a special case of "relational event modeling," developed by Chris Marcum, Ph.D., corresponding author, staff-scientist and a methodologist in SBRB's Social Network Methods Section. With this model, Dr. Marcum and Dr. Persky can look at sequences of food choices that each mother makes as they navigate the buffet and try to predict what choice they'll make next in real time. The model uses clues about the buffet environment and human behavior to make these predictions.

"The ability to break down what is usually thought of as a single behavior (picking out food for lunch) into its much smaller parts is powerful because it allows researchers to detect patterns in hard-to-access data," said Dr. Marcum. "The research also sheds light on how those and 'nonconscious' behaviors influence food choices."

Dr. Persky and her colleagues will use this new approach to assess research participant behavior in future studies using the VR buffet.

"We hope that this work will help researchers design better interventions to improve people's food choice behavior," said Dr. Persky. "We also think this research could be applied to help us understand how to create food choice environments, like cafeterias, that would 'nudge' people toward more healthful choices."