Stomach cancers fall into four distinct molecular subtypes researchers with The Cancer Genome Atlas (TCGA) Network have found. In the study, published online July 23, 2014, in Nature, the scientists report that this discovery could change how researchers think about developing treatments for stomach cancer, also called gastric cancers or gastric adenocarcinomas.

Instead of considering gastric cancer as a single disease, as has been done in the past, researchers will now be able to explore therapies in defined sets of patients whose tumors have specific genomic abnormalities. Stomach cancers are a leading cause of cancer-related mortality worldwide, resulting in an estimated 723,000 deaths annually.

Previous attempts to examine the clinical characteristics of gastric cancer were hindered by how differently cancer cells can look under a microscope, even when from the same tumor. The researchers hope that the new classification system will serve as a valuable adjunct to the current pathology classification system, which has two categories: diffuse and intestinal.

"A key advance with this project is that we have identified and developed a much more useful classification system to find groups of gastric cancer that have distinct molecular features, and at the same time, we also identified key targets to pursue in different groups of patients," said Adam Bass, M.D., Harvard Medical School, Dana-Farber Cancer Institute, the Broad Institute, Boston, and one of the lead investigators on the project. "This will provide a strong foundation for categorizing the disease and for doing so in a way in which we can develop clinical trials based on some of the critical molecular alterations that are driving different classes of cancers."

Tumors in the first group, which represented 9 percent of the tumors, were positive for Epstein-Barr virus (EBV) and had several other molecular commonalities. Tumors in a second subgroup (22 percent of the tumors) had high microsatellite instability (MSI), which is the tendency for mutations to accumulate in repeated sequences of DNA. The remaining subgroups differed in the level of somatic copy number alterations (SCNAs), which can result from duplication or deletion of sections of the genome. The tumors in the third subgroup, which comprised 20 percent of the tumors, were considered to have a low level of SCNAs and were called genomically stable. The remaining 50 percent of tumors were classified as chromosomally unstable, with a high level of SCNAs.

The EBV-positive subgroup of tumors was of particular interest. EBV is best known in the United States as the cause of infectious mononucleosis, which is characterized by fever, sore throat, and swollen lymph glands, especially in the neck. EBV is also suspected of causing certain cancers, including nasopharyngeal carcinoma and some types of lymphoma. Previous research had shown that EBV can be detected in a minority of gastric adenocarcinomas and that EBV genes are expressed in those tumors. However, this study found that the presence of EBV in gastric tumors is associated with a number of other molecular characteristics. 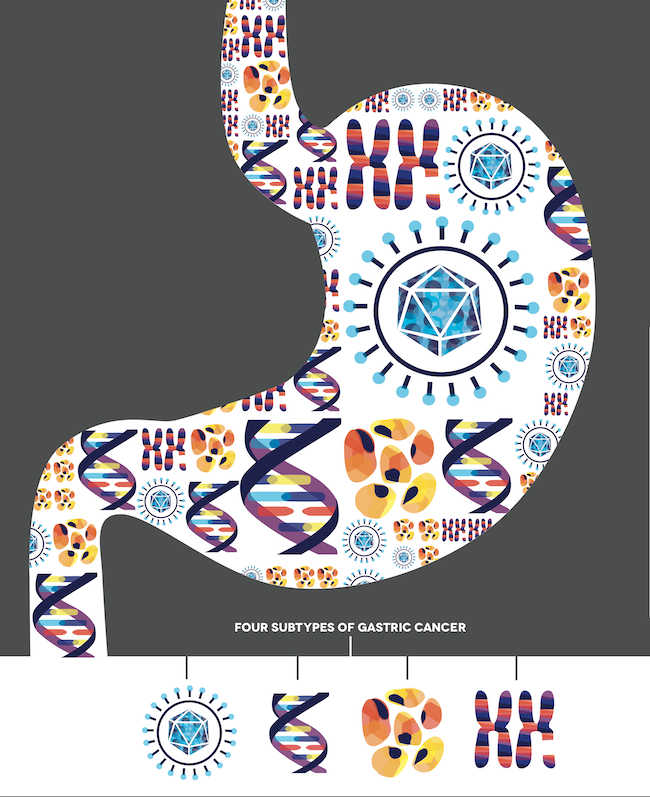 First, the researchers observed that EBV-positive tumors displayed a high frequency of mutations in the PIK3CA gene, which codes for a component of a protein, PI3-kinase, which is essential for cell growth and division and many other cellular activities that are important in cancer. Although 80 percent of EBV-positive tumors harbored a protein-changing alteration in PIK3CA, PIK3CA mutations were found in 3 percent to 42 percent of tumors of the other gastric cancer subtypes. The scientists suggested that EBV-positive tumors might respond to PI3-kinase inhibitors, some of which are in the early stages of testing in clinical trials but are not yet approved by the U.S. Food and Drug Administration for general use.

Some tumors in the EBV-positive subgroup also showed more gene copies being produced in a chromosomal region that contains the JAK2 gene. The JAK2 protein facilitates cell growth and division, and the increased expression of JAK2 may inappropriately activate cell growth. The amplified region also contains the genes for two proteins, PD-L1 and PD-L2, which suppress immune responses; their increased expression may help tumors escape destruction by the immune system. The investigators suggested that these findings support the evaluation of JAK2 inhibitors and PD-L1/2 antagonists for the treatment of EBV-positive gastric cancers.

"Gaining these insights into the connection between EBV and gastric cancer is the type of groundbreaking research that NIH is pleased to be a part of. We look forward to the potential clinical implications of this discovery," said NIH Director Francis S. Collins, M.D., Ph.D.

"This study reinforces the value of the approach we are using to study genomic diversity and similarity among tumors of many different cancer types," said NCI Director Harold Varmus, M.D. "Only such a systematic analysis could have yielded observations about the association between EBV and several provocative molecular characteristics."

Important insights also came from analyses of the three other gastric cancer subgroups. For example, tumors of the genomically stable subtype contained frequent mutations in a gene called RHOA, whose product interacts with other cellular proteins to help cells change shape and migrate, which may be important in tumor growth. This finding suggests possible targets for treating tumors of this subtype. And tumors of the chromosomal unstable subtype contained frequent amplifications of genes that encode receptor proteins on the outside of the cell, leading to the promotion of aberrant cell growth. Drugs are already available to curb the activity of some of these proteins.

"This most recent TCGA study again demonstrates the importance of its comprehensive design," said NHGRI Director Eric Green, M.D., Ph.D. "These results give us important new genomic insights into a cause of a deadly form of cancer."

TCGA is jointly managed by the National Cancer Institute (NCI) and the National Human Genome Research Institute (NHGRI), both parts of the National Institutes of Health (NIH), to comprehensively characterize the genomes of more than 30 types of cancer. The TCGA Research Network has generated data and published analyses on a number of cancers, all of which can be found on the TCGA website, http://www.cancergenome.nih.gov.

TCGA-generated data are freely available in advance of publication at the TCGA Data Portal, http://tcga-data.nci.nih.gov/tcga, and CGHub, https://cghub.ucsc.edu. The TCGA Research Network includes more than 150 researchers at dozens of institutions across the nation. A list of participants is available at http://cancergenome.nih.gov/abouttcga/overview. More details about TCGA, including Quick Facts, Q&A, graphics, glossary, a brief guide to genomics and a media library of images can be found at http://cancergenome.nih.gov.

NCI leads the National Cancer Program and the NIH effort to dramatically reduce the burden of cancer and improve the lives of cancer patients and their families, through research into prevention and cancer biology, the development of new interventions, and the training and mentoring of new researchers. For more information about cancer, please visit the NCI website at http://www.cancer.gov or call NCI's Cancer Information Service at 1-800-4-CANCER (1-800-422-6237).

NHGRI is one of the 27 Institutes and Centers at the National Institutes of Health. The NHGRI Extramural Research Program supports grants for research and training and career development at sites nationwide. Additional information about NHGRI can be found at http://www.genome.gov.

NIH, the nation's medical research agency, includes 27 Institutes and Centers and is a component of the U.S. Department of Health and Human Services. NIH is the primary federal agency conducting and supporting basic, clinical, and translational medical research, and is investigating the causes, treatments, and cures for both common and rare diseases. For more information about NIH and its programs, visit http://www.nih.gov.