The billions of microbes that reside on human skin - probably more than 10 billion microbial cells on each of us - may be fellow travelers but they aren't free riders. Instead, the skin microbiota plays an intricate role in the human immune system, actually directing many immune functions and helping to defend its host against invading bacterial pathogens.

In a review article in the Nov. 21, 2014, issue of Science, Julie Segre, Ph.D., head of the Microbial Genomics Section of the National Human Genome Research Institute (NHGRI), and Yasmine Belkaid, Ph.D., head of the Mucosal Immunology Section of the National Institute of Allergy and Infectious Diseases (NIAID), sum up what researchers have learned so far about the advantages, and some of the downsides, of this intimate partnership.

The underlying advantage, of course, is that the microorganisms that live on human skin-called commensals - have evolved to defend their dwelling place - us. 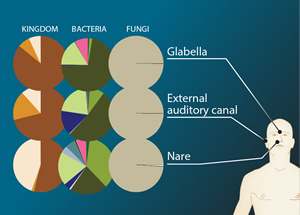 For example, the skin bacterium Staphylococcus epidermidis produces a secretion that reduces inflammation and speeds wound healing by binding to an immune-system receptor. S. epidermidis also inhibits tissue colonization by the highly pathogenic S. aureus, the source of many hospital-acquired infections that in its methicillin-resistant form is known as the "superbug" MRSA.

Other skin microorganisms perform a wide variety of functions that help out their host. Among these functions are overall immune system screening, tissue repair, wound healing, inflammation control, production of defensive anti-microbial peptides (AMPs), acceleration of the complement arm of the immune system, regulation of interleukin-1 (IL-1), and modulation of T cells, key actors in directing immune system response. In fact, the richest concentrations of immune cells in the body are at sites populated by commensal cells, and the skin is "one of the largest reservoirs of memory T cells in the body," Drs. Belkaid and Segre report.

Most people don't realize the skin microbiota's contribution to their well-being. "Humans want to eat yogurt because they have the concept that the microbes in their gut are providing a benefit," said Dr. Segre. "Whereas on their hands, all people want to do is use hand sanitizer and sterilize themselves. They really do not perceive that there is a benefit to the microbes that reside on their skin."

A potential downside, of course, is that any disturbance of the fine balance of the skin microbes-called dysbiosis-can be costly. If the microbiota is sick, the human host will probably get sick, too.

Dysbiosis has long been associated with skin disorders such as atopic dermatitis (eczema), psoriasis and the teenage bugaboo, acne. Eczema prevalence has doubled in industrialized countries, possibly because of environmental pressures on the skin biota, such as increased usage of antibiotics, less exposure to environmental microbes in soil and water, and more conditioned environments. Moreover, Drs. Belkaid and Segre speculate that "profound changes" in the human skin microbiota may contribute to the increase in chronic inflammatory and autoimmune disorders seen in high-income countries."

If S. epidermidis fails to confine S. aureus to the nasal tissue that it often inhabits, the human host could be in for dangerous skin and soft tissue infections.

Researchers have not yet settled the question of how much human beings benefit from their microbial hangers-on. But Drs. Segre and Belkaid are convinced that humans do receive a net gain from their skin biota. After all, humans and their microbes evolved together. "I think we always gain more from them than we have lost," said Dr. Belkaid. "The presence of microbes is inherent to being alive. We cannot exist without them."

For example, vaccine development and vaccination programs could be improved if ways are found to reduce inflammation at injection sites by modifying skin microorganisms. The vast cosmetics industry might be roiled by increased knowledge about the effect of makeup and moisturizing creams; an ointment that is makeup to a human might be nourishment-or poison - to a microbe.

More significantly, the human skin biota might help meet the growing challenge of pathogens that have grown resistant to antibiotic drugs. Microbes have ways of killing other microbes as they compete for living sites. Perhaps they can teach us new tricks.

"We envision a new therapeutic landscape leveraging unique mutagenic profiles with tailored clinical interventions, that reshape our microbial communities," Drs. Belkaid and Segre wrote in their Science paper. ". . . [S]ubtle alterations in defined nutrient availability may have a dramatic impact on the skin microbiota composition and when rationally designed could provide a powerful advantage for microbes endowed with regulatory or protective properties." 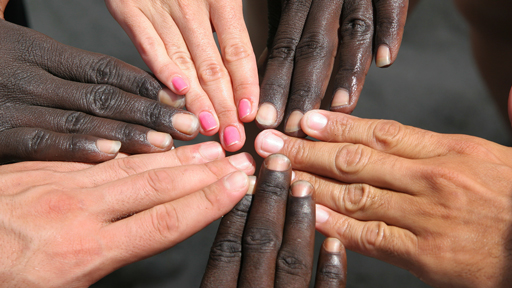