National Institutes of Health (NIH) researchers have identified a treatment that significantly decreases the risk of stroke in children with a rare genetic disease called DADA2 (deficiency of adenosine deaminase type 2).

Benefits of the Treatment

The disease results when a malfunctioning gene hampers a person's ability to produce the enzyme ADA2 (adenosine deaminase 2). This can lead to inflammation of the walls of the blood vessels, hindering blood flow to the brain and resulting in strokes. The treatment works by blocking the inflammatory effects of a protein - tumor necrosis factor - that is over-produced in people with DADA2 and other autoimmune and autoinflammatory diseases. Researchers published their findings in the April 18, 2019, issue of The New England Journal of Medicine.

"Prior to this treatment, there were 15 children -- out of 25 DADA2 patients in the NIH group  -- who had collectively experienced 55 strokes," said Amanda Ombrello, M.D., a staff clinician at the National Human Genome Research Institute (NHGRI), part of NIH. "Since starting treatment with the new medications, they have had zero strokes."

Researchers found the treatment for DADA2 just two years after six NIH institutes and the NIH Clinical Center, and a group in Israel, independently discovered the gene variant that causes the disease using a genomic technique called whole exome sequencing.

"Genome sequencing provided the key link that tied together children from around the world with fevers and unexplained strokes. The discovery that all of these children are deficient in the same protein greatly accelerated the search for a treatment," said NHGRI Scientific Director Dan Kastner, M.D., Ph.D. "And having a treatment will bring lifelong benefits to these children and their families." 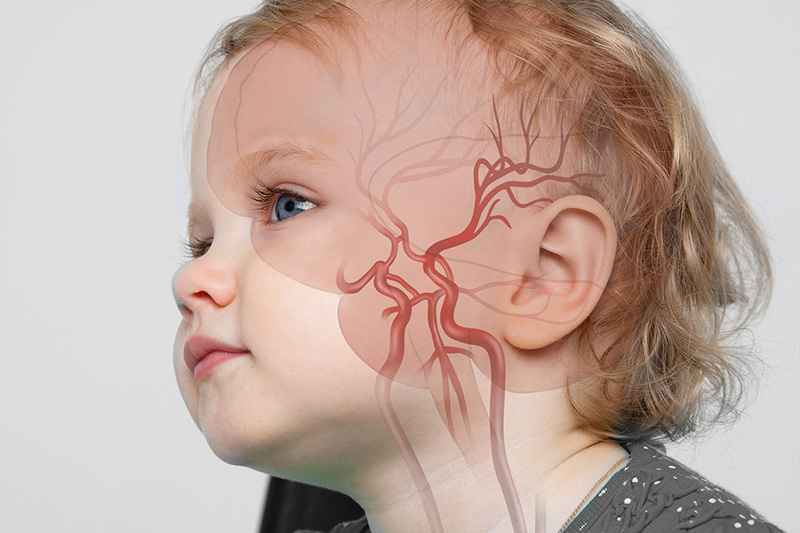 DADA2 is a rare disease that presents in childhood, even in children less than a year of age. Most patients in the study had tried many medications, including steroids, drugs used for vasculitis (inflammation of blood vessels) and anti-coagulant medications that are commonly used in stroke patients to prevent blood clots. None of these were effective in preventing strokes.

Researchers also considered replacing the deficient ADA2 via infusions of fresh frozen plasma, a blood product that can be obtained from blood donors, but this treatment was unsuccessful in maintaining a higher ADA2 level. Some DADA2 patients at other institutions had received hematopoietic stem cell transplant (stem cells that give rise to all other blood cells), which successfully treated the disease symptoms.

A key insight came when researchers noticed TNF staining around inflamed blood vessels in the patients' skin biopsies. That led them to test anti-TNF medications as a possible treatment.

"Our success in the DADA2 patients with stroke gives us hope about the potential of anti-TNF agents for improving many other aspects of DADA2," Dr. Ombrello said.

In addition to stopping strokes, researchers observed significant improvement in laboratory studies such as inflammatory markers, iron and red blood cell counts. They also observed remarkable catch-up growth in the patients. The persistent inflammation patients experienced prior to treatment prevented them from gaining weight and height.

In the next steps of their work, researchers will monitor the effect of anti-TNF treatment on the other manifestations of DADA2 such as liver disease, severe anemia and skin rashes.

The 2014 studies also raise the possibility that disruptions in the ADA2 pathway may contribute to susceptibility to stroke in the general population. Thus, this new medication may prove useful in at least some older patients who have suffered from strokes for an unknown reason.