Deoxyribonucleic acid (DNA) is a molecule that contains the biological instructions that make each species unique. DNA, along with the instructions it contains, is passed from adult organisms to their offspring during reproduction.

Where is DNA found?

In organisms called eukaryotes, DNA is found inside a special area of the cell called the nucleus. Because the cell is very small, and because organisms have many DNA molecules per cell, each DNA molecule must be tightly packaged. This packaged form of the DNA is called a chromosome.

During DNA replication, DNA unwinds so it can be copied. At other times in the cell cycle, DNA also unwinds so that its instructions can be used to make proteins and for other biological processes. But during cell division, DNA is in its compact chromosome form to enable transfer to new cells.

Researchers refer to DNA found in the cell's nucleus as nuclear DNA. An organism's complete set of nuclear DNA is called its genome.

Besides the DNA located in the nucleus, humans and other complex organisms also have a small amount of DNA in cell structures known as mitochondria. Mitochondria generate the energy the cell needs to function properly.

What is DNA made of?

The four types of nitrogen bases found in nucleotides are: adenine (A), thymine (T), guanine (G) and cytosine (C). The order, or sequence, of these bases determines what biological instructions are contained in a strand of DNA. For example, the sequence ATCGTT might instruct for blue eyes, while ATCGCT might instruct for brown.

The complete DNA instruction book, or genome, for a human contains about 3 billion bases and about 20,000 genes on 23 pairs of chromosomes. 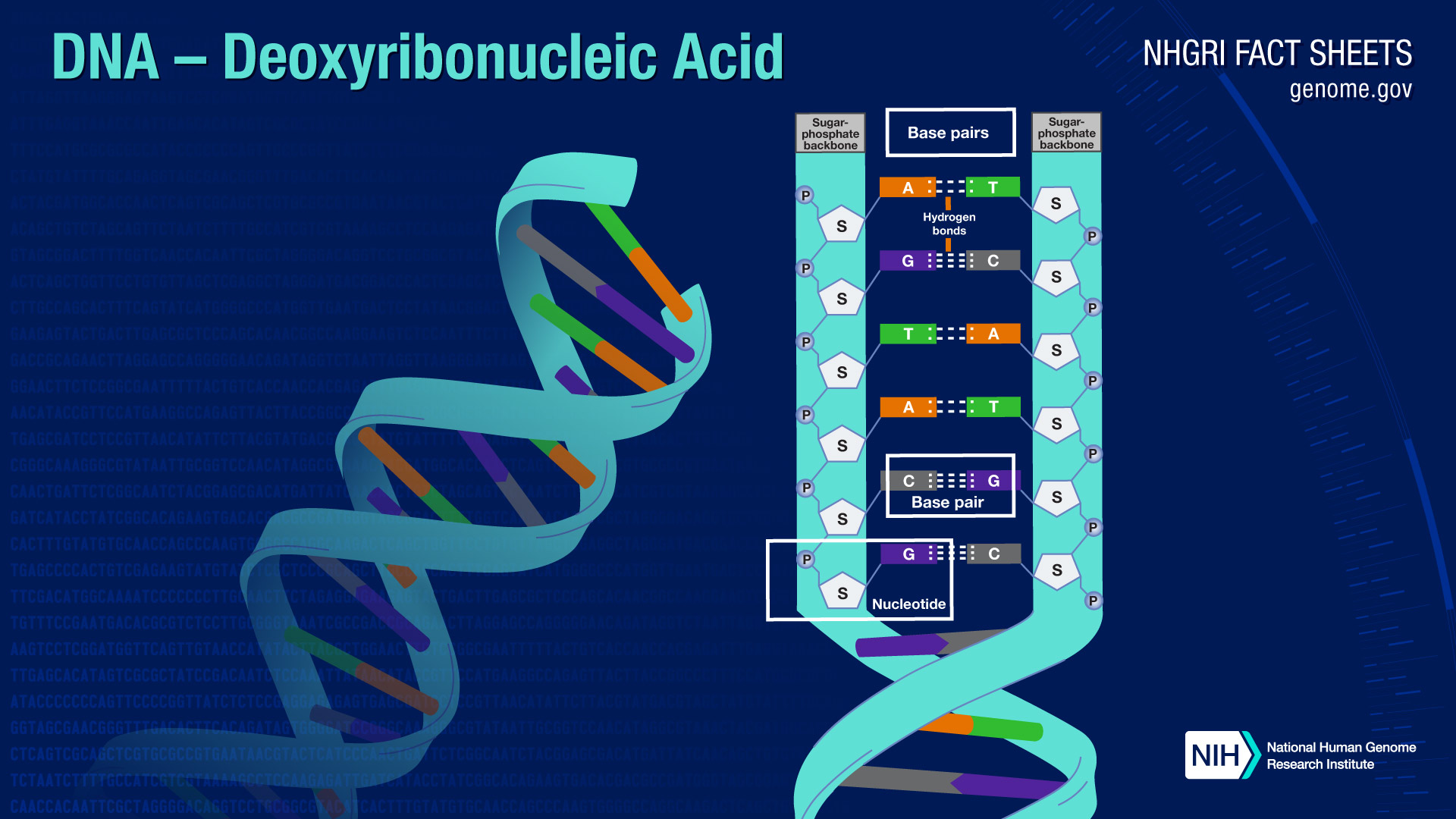 What does DNA do?

DNA contains the instructions needed for an organism to develop, survive and reproduce. To carry out these functions, DNA sequences must be converted into messages that can be used to produce proteins, which are the complex molecules that do most of the work in our bodies.

Each DNA sequence that contains instructions to make a protein is known as a gene. The size of a gene may vary greatly, ranging from about 1,000 bases to 1 million bases in humans. Genes only make up about 1 percent of the DNA sequence. DNA sequences outside this 1 percent are involved in regulating when, how and how much of a protein is made.

How are DNA sequences used to make proteins?

DNA's instructions are used to make proteins in a two-step process. First, enzymes read the information in a DNA molecule and transcribe it into an intermediary molecule called messenger ribonucleic acid, or mRNA.

Next, the information contained in the mRNA molecule is translated into the "language" of amino acids, which are the building blocks of proteins. This language tells the cell's protein-making machinery the precise order in which to link the amino acids to produce a specific protein. This is a major task because there are 20 types of amino acids, which can be placed in many different orders to form a wide variety of proteins.

The Swiss biochemist Frederich Miescher first observed DNA in the late 1800s. But nearly a century passed from that discovery until researchers unraveled the structure of the DNA molecule and realized its central importance to biology.

For many years, scientists debated which molecule carried life's biological instructions. Most thought that DNA was too simple a molecule to play such a critical role. Instead, they argued that proteins were more likely to carry out this vital function because of their greater complexity and wider variety of forms.

The importance of DNA became clear in 1953 thanks to the work of James Watson*, Francis Crick, Maurice Wilkins and Rosalind Franklin. By studying X-ray diffraction patterns and building models, the scientists figured out the double helix structure of DNA - a structure that enables it to carry biological information from one generation to the next.

* James Watson was the first NHGRI Director and appears here as part of our history collection. Despite his scientific achievements, Dr. Watson’s career was also punctuated by a number of offensive and scientifically erroneous comments about his beliefs on race, nationalities, homosexuality, gender, and other societal topics. Dr. Watson’s opinions on these topics are unsupported by science and are counter to the mission and values of NHGRI.

What is the DNA double helix?

Scientist use the term "double helix" to describe DNA's winding, two-stranded chemical structure. This shape - which looks much like a twisted ladder - gives DNA the power to pass along biological instructions with great precision.

To understand DNA's double helix from a chemical standpoint, picture the sides of the ladder as strands of alternating sugar and phosphate groups - strands that run in opposite directions. Each "rung" of the ladder is made up of two nitrogen bases, paired together by hydrogen bonds. Because of the highly specific nature of this type of chemical pairing, base A always pairs with base T, and likewise C with G. So, if you know the sequence of the bases on one strand of a DNA double helix, it is a simple matter to figure out the sequence of bases on the other strand.

DNA's unique structure enables the molecule to copy itself during cell division. When a cell prepares to divide, the DNA helix splits down the middle and becomes two single strands. These single strands serve as templates for building two new, double-stranded DNA molecules - each a replica of the original DNA molecule. In this process, an A base is added wherever there is a T, a C where there is a G, and so on until all of the bases once again have partners.

In addition, when proteins are being made, the double helix unwinds to allow a single strand of DNA to serve as a template. This template strand is then transcribed into mRNA, which is a molecule that conveys vital instructions to the cell's protein-making machinery. 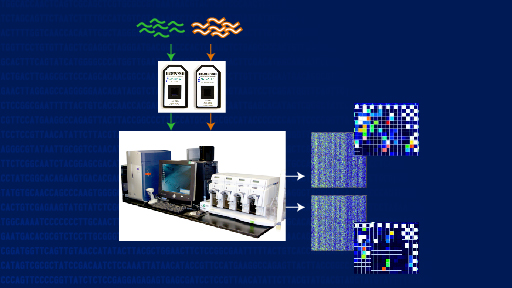