Dr. Bob Blakesley, director of the NISC sequencing group, rides off into the sunset

Genomics research is a quintessential team science. Contributing to each project are those who identify the scientific questions, collect biological samples, purify and sequence the DNA and analyze the resulting data. The National Institutes of Health (NIH) will lose a key member of its broader genomics team with the December 31 retirement of Robert Blakesley, Ph.D., director of the sequencing group at the NIH Intramural Sequencing Center (NISC) in Rockville, Maryland.

"Bob's dedication to his work is sky high, only matched by his competence," said Eric Green, M.D., Ph.D., director of the National Human Genome Research Institute (NHGRI), part of NIH. "When I recruited him to NISC in 2000, I knew that we would benefit from someone with his seasoned private-sector experience, deep technical expertise, good judgment and calm, mature personality." In a fitting tribute to his myriad contributions, Dr. Green awarded Dr. Blakesley the NHGRI Director's Distinguished Service Award at the Institute's 2015 scientific symposium.

"Bob is very meticulous, structured and properly organized," said James Mullikin, Ph.D., NISC director. "He wants the highest quality product and adheres strictly to doing the best we possibly can." 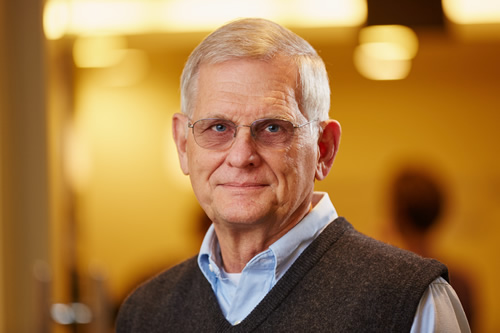 Dr. Blakesley joined NISC in 2000, three years after Dr. Green established the multi-disciplinary genomics facility on behalf of NIH. The scope of what Dr. Blakesley has accomplished since then on behalf of numerous intramural researchers is nothing short of epic. Between 1998 and 2012, NISC generated more than 57 million DNA sequence reads for 76 researchers using the Sanger dideoxy sequencing method. That figure has spiked in the last six years with the introduction of next-generation DNA sequencing: during that time, NISC generated 2,151 billion sequence reads for 20,593 unique DNA samples contributed by 126 researchers at 15 NIH institutes and centers.

Dr. Blakesley's achievement goes beyond the sheer quantity of sequence data: his group has attained an extraordinary 90 percent success rate in generating sequence data from DNA samples accepted for study.

"He demands the highest possible quality all the time," said Ms. Alice Young, deputy director of the NISC sequencing group. "He takes a lot of personal pride in his work, so everybody who works with him has the same pride and ownership." Ms. Young has worked with Dr. Blakesley since 1990, first at Bethesda Research Labs (later re-named Life Technologies, Inc.) and now at NISC.

Dr. Blakesley's home team (aka family) were California engineers. His grandfather, a mechanical engineer, supplied materials used in the state's oil fields. His father, an electrical engineer, began his career when transistors were cutting-edge, and reached its peak when he developed radar to control lunar landings for the Apollo space missions.

"We had a workshop in our garage when I was growing up," said Dr. Blakesley. "My father was always figuring something out, making new tools or building electronic devices. I absorbed his desire to understand how things work and to build tools."

Dr. Blakesley grew up assembling model cars and radio-controlled planes for which he built his own controller. By the time he reached high school, he had built his own stereo system. A turning point came in the fall of 1963 when he read a long Los Angeles Time article on about the 10th anniversary of the famous Francis Crick and James Watson discovery of the double helical structure of DNA.

"Once I read that article, I wanted to know how genes worked. It kick-started me and drove my education and career," he said.

At Michigan, he learned to make his own reagents (compounds added to a system to cause a chemical reaction, or added to see if a reaction occurs) in order to study the kinetic and physical properties of polymerases (enzymes that make long chains of nucleic acids, such as DNA and RNA).

A career crossroads presented itself while he was working as a postdoctoral fellow in Dr. Robert Wells' laboratory at the University of Wisconsin-Madison. He was the only one in the laboratory when a sales representative from Bethesda Research Labs (BRL) called and tried to sell him restriction enzymes.

"I told him that I make my own," Dr. Blakesley recalled. The conversation eventually led to a job offer from BRL to oversee a research group that would develop an automated DNA sequencing machine for medical diagnostics.

"That hooked me. At the time, Fred Sanger and Wally Gilbert (British and American biochemists, respectively, who shared the 1980 Nobel Prize in chemistry thought that DNA sequencing might be important to medicine. That was the challenge that got me interested in the company," he said.

BRL was first located in a 500-square-foot office and storage room in Gaithersburg, Maryland. Half of the space was used as a laboratory, and enzyme purifications were performed in a small beer cooler. "We often left the office door open because the air conditioner didn't work well. A huge dog from the next-door veterinarian clinic would often wander in to check our progress."

It was an exciting time to direct new product development for a start-up company. "We really listened to our customers, were as efficient as possible and paid attention to detail. In the end, we delivered to them what they needed," said Dr. Blakesley, who patented 10 products and procedures and introduced more than 150 products in his 23 years in private industry.

For the first time, Dr. Blakesley tried his hand at managing people. He credits Debbie Blakesley, his wife and a trained social worker, with helping him learn to manage people. "She taught me to look for what employees are good at, take the parts they do well and build on those to mold them into what I needed," he said, adding that they've been married for 45 years.

BRL grew quickly and eventually became less focused on the customers and more focused on profit. Increasingly frustrated, Dr. Blakesley contacted Dr. Green to ask if he knew of any career opportunities. NISC, the nascent NIH organization that provided DNA sequencing services on a cost-recovery basis, needed someone with industry experience.

"Bob was one of the best hires I ever made," said Dr. Green. The admiration is mutual. Dr. Blakesley credits Dr. Green for his unwavering support and for valuable introductions to those working in the large genome sequencing centers around the world.

"NISC benefited a lot from collaborating with bigger groups that have successfully tackled big projects," said Dr. Blakesley. "We were in almost constant contact with the large genome sequencing centers at Washington University, the Broad Institute, and Baylor College of Medicine. When we ran into a problem, we called them up and asked how they solved it. I don't think we could've gotten to where we are today without those interactions."

The exchange has been a two-way street. Like a good team member, NISC shared its information with the other centers. "The real benefit to team science is that you can solve very complex problems by collaboration, by bringing in people from different disciplines," said Dr. Blakesley. "I'm most proud of our collective successes at NISC. We have a fine group of individuals who work very hard and care about each other. I will be sad to leave."

Dr. Blakesley's future plans revolve around his family. "I want to spend more time with my three kids and my six grandkids," he said. "I'd like to spend time on genealogy, wood working, gardening and organizing the piles of 35-mm color slides and thousands of digital photos that have been stacking up."

Whatever Dr. Blakesley's direction, he will exceed all expectations just as he has at NISC, said Ms. Young. "He has really high standards for everything. It's his nature."