Over the years, domestic dogs have figured in medical breakthroughs, whether by mushing across Alaska to deliver diphtheria antitoxin serum or by serving alongside diabetics to detect their low blood sugar. Now, an oncogene shared by dogs and humans points to another way that canines may come to our aid-as a powerful animal model for research into human cancer.

A genetic mutation that triggers bladder cancer in dogs is identical to a mutation that is implicated in multiple human cancers, a team of scientists from the National Institutes of Health, Purdue University in West Lafayette, Indiana, and Tufts University in North Grafton, Massachusetts, reported in March. Their findings suggest that dogs could serve as in vivo models for developing therapies for many human cancers, including aggressive skin cancer and cancer of the colon, rectum, ovary and thyroid.

Coauthors of the paper in the March 12, 2015, advance online issue of Molecular Cancer Research include Brennan Decker, an M.D., Ph.D. candidate at the National Institutes of Health (NIH)-Cambridge Scholars Program; Heidi Parker, Ph.D., of the National Human Genome Research Institute (NHGRI); and Elaine Ostrander, Ph.D., an NIH Distinguished Investigator and chief of NHGRI's Cancer Genetics and Comparative Genomics Branch, who played a leading role in sequencing the canine genome. 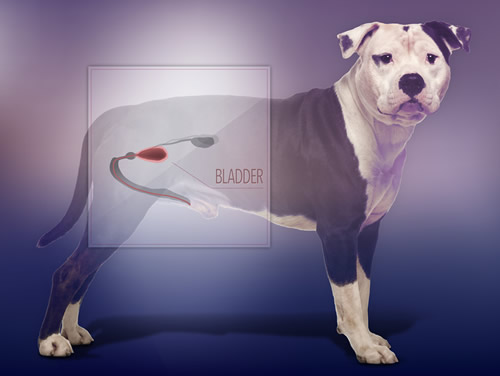 The gene, known as BRAF, directs cells to make a protein that turns on and off to control cell growth and development. The mutation, which is not inherited but rather arises during an organism's lifetime, alters the protein and causes cells to grow and divide uncontrollably. In dogs, the researchers found the mutation in more than 80 percent of bladder cancers. In humans, it is rare in bladder cancer but common in several other malignancies, accounting for about 8 percent of all cancers.

"Our findings suggest that the dog is once again on the cusp of a cancer therapy breakthrough," the researchers wrote in the Molecular Cancer Research paper. The mutation's prevalence in dog bladder cancers "sets the stage for the domestic dog to provide a highly relevant system in which to further develop BRAF-targeted therapy strategies," they added.

Canine tumors carrying the mutation also offer a new environment for assessing the effectiveness of drugs designed to combat BRAF-associated cancers and seeking ways around drug resistance. Moreover, "because of the very high frequency of the mutation, examination of the dog tumors might enable us to determine why this particular mutation occurs and whether there is an environmental or genetic cause," Dr. Parker said.

Many human and canine cancers are similar, and dogs already have served as a model in cancer research. They were central to immune system research that led to development of bone marrow transplantation. "Dogs and humans have a similar tissue and underlying biology, including response to therapy," Dr. Parker said.

Now, dogs and their owners stand to benefit greatly from the BRAF research. Cancer is as great a problem for dogs as for humans; a quarter of the U.S. dog population will develop cancer during their lifetimes. As in humans, incidence increases rapidly with age. But the new research offers the prospect of earlier detection and treatment, and thus longer lives.

"Our lab has demonstrated that the mutation, when present, can be found from cells shed into urine nearly 100 percent of the time," said Dr. Ostrander. "This means dogs can be diagnosed without expensive imaging and anesthesia." With more than 20,000 dogs a year getting the disease, the test could have a strong impact on veterinary diagnostics.

More work will be needed to produce an inexpensive, noninvasive test for canine bladder cancer. But if such a test can be developed, in this case at least, dogs' best friend would seem to be humans.