Researchers have made a good start in identifying and understanding genetic mutations that have evolved over thousands of years to protect Africans from disease-causing pathogens.

Today, these same mutations can increase the risk of other diseases in Africans and people of African descent. Mutations in the gene APOL1, for example, evolved to offer protection against the pathogen that causes African sleeping sickness, but today Africans and people of African ancestry with these genetic mutations have a higher risk of kidney disease.

"Strides have been made but more research must be done to understand the interactions of ancient genes with modern environments," said Charles N. Rotimi, Ph.D., co-author of an opinion article published September 16, 2016, in the journal Current Opinion in Genetics & Development.

"This should include more comprehensive DNA sampling and genetic characterization of Africans and the people of the African diaspora." Dr. Rotimi is director of the Center for Research on Genomics and Global Health at the National Institutes of Health (NIH), and chief and senior investigator of the Metabolic, Cardiovascular and Inflammatory Disease Genomics Branch at the National Human Genome Research Institute (NHGRI), part of NIH.

People of the African diaspora include descendants of the estimated 12 to 14 million Africans who were enslaved and transported to European colonies in Latin America and the United States between 1500 and 1800. Africans mixed with people in the colonies, resulting in a wide range of genetic contributions to different groups of people. The average percentage of African ancestry in the Americas varies widely: 87 percent in African Caribbeans from Barbados, 75 percent in African Americans in the United States southwest, 19 percent in Puerto Ricans, 7 percent in people with Mexican ancestry in Los Angeles and 4 percent in both Peruvians in Lima and Argentinians across Argentina, according to the article.

"Genomics is facilitating better understanding of these multi-layered stories and their implications for human history and health," said Dr. Rotimi. "The way people look outwardly (phenotypic appearances) and self and group identification don't capture the ancestral backgrounds of individuals that make up the African diaspora.

Until recently, most studies examining genetic risk factors for disease have focused on Europeans. Researchers have made some progress in understanding the genomics of Africa, the most genetically diverse region in the world. In 2015, Dr. Rotimi and his colleagues in Africa and the United Kingdom published the African Genome Variation Project, the first comprehensive characterization of genomic diversity across sub-Saharan Africa. The study, which used data generated from 20 African ethno-linguistic groups along with the 1000 Genomes Project, uncovered evidence of how environmental forces such as climate and exposure to infectious agents have shaped the genomes of Africans and influenced susceptibility to conditions such as malaria, Lassa fever and African sleeping sickness.

"There is a great need for large-scale genetic investigations of diverse groups of people across Africa, and a corresponding need for more thorough African-specific technological ways to analyze that data," Dr. Rotimi and his co-authors wrote.

To advance these goals, the NIH Center for Research on Genomics and Global Health is actively participating in the H3Africa Consortium's effort to develop an African-specific genotyping array. This partnership, led by H3ABioNet, also includes the Wellcome Trust Sanger Institute, Illumina, the University of Illinois, the National Center for Supercomputing Applications, the Baylor Human Genome Sequencing Center and others. They will base the new genotyping array on the whole genome sequences of more than 4,000 Africans across the continent. (The whole genome is the entire set of genetic instructions found in a cell.) This genotyping array will be used to detect genetic variants in an individual's DNA. This information can then be used in genome-wide association studies (GWAS), which compare the genomes of people with and without a disease to search for regions of the genome that contain genetic variants associated with the disease.

"A substantial and ongoing investment of resources is needed for Africans and people of African ancestry to benefit from advances in genomic and precision medicine," Dr. Rotimi said. "Investing in genomic research in Africa will benefit everyone, given that all modern humans originated in Africa 100,000 years ago." 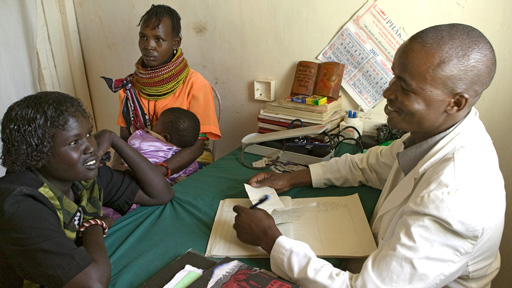